9 Dey: The day of Basirah and our proximity to Wilayah 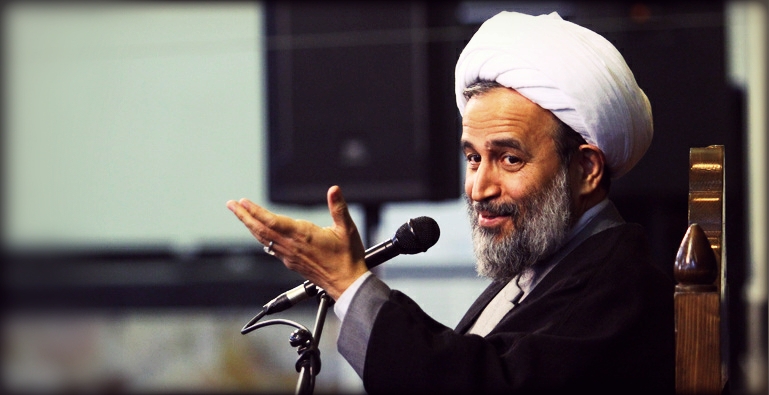 On the occasion of 9 Dey, the day that the revolutionary people of the Islamic Republic came out on the streets to quash the green movement, Shaykh Alireza Panahian gave a speech at the shrine of Imam Reza (as) in Mashhad.

Summary of Speech by Agha Panahian:

01. #Panahian: Basirah is not just to understand, but it is to analyse. Not just understand your time properly, but understand what will happen in the future too.

02. #Panahian: Usually we recognise someone being good from their softness of tone and kindness of actions. Why don’t we use Basirah as a virtue to see goodness in people?

03. #Panahian: If we are loyal, so are dogs, if we are brave, so is an animal who is protecting its babies. How about we use a virtue like Basirah to see goodness, a virtue which is specific to humans.

04. #Panahian: Knowledge can come from memory, wisdom comes from the heart of a person, not the memory of the brain. Wisdom is the important part of basirah, not knowledge.

05.#Panahian: Knowledge can make you understand general principles but wisdom is what leads you knowing where they apply.

06. #Panahian : Allah states that the Quran is something that gives you Basirah. If you are not close to the Quran, do not expect to have Basirah.

07. #Panahian : Why was Imam Khomeini so strong in his level of Basirah. The security guard of his house said during the day he would open the Quran 12 times.

08. #Panahian : Allah has promised that if you do not develop your strength of analysis, and you get lost, Allah, will not protect you.

09. #Panahian : Shall I tell you about people who dropped four levels deeper than shaytan himself in hell? They were people who were not protected by Allah due to lack of basirah.

10. #Panahian : Imam Ali said to the person in charge of Yemen and asked him to choose ten people to send to Imam Ali.

11. #Panahian: They chose a hundred who picked seventy, The seventy picked thirty and they picked ten who went to Imam Ali out of which one came in front of Imam Ali and gave a beautiful speech.

12. #Panahain: Imam Ali asked him his name, he was ibn Muljim.

13. #Panahian : He told him there and then he would be his killer. And he said kill me if this is so. What happened to him? He even fought against the khawarij! What happened?

14. #Panahian: Agha behjat said it was because of his weakness of analysis. When he saw Imam Ali kille all the khawarij, he heard the cries of the children and women of the khawarij and his power of analysis was thrown out of the window. He blamed their grief on Imam Ali rather than the khawarij themselves.

15. #Panahian : Imam Ali asked the people to get together and bring the memorisers of the Quran. In front of the hufaaz who were khawarij, he said to the Quran speak. it didn’t, he said it again, the Quran didn’t speak again. He said it one more time, and when it didn’t, people said this is just a book, it can’t speak. Imam Ali replied saying, that is what I am trying to tell you, this Quran that you hide behind are pages and ink, you need to have wisdom and analysis to make the right decisions.

16. #Panahian : ibn muljim = a life of drowning in the love of Ali and still becoming his killer.

17. #Panahian : the grandson of Imam Hasan a.s was confused about whether Muawiyah was right or Imam Ali

18. #Panahian : Did our politicians know that America does not stick to promises?

19. #Panahian : When was the first election in Islam? On every step the Prophet s.a.w chose and appointed. The people of Media had not become Muslim, he appointed 12 regional leaders in Medina. Where are people and elections in the equation?

20. #Panahian: Did all the people that were chosen stay good? One joined Muawiyah. One came to tie the ropes when they came to take Ali… You mean the divinely appointed 12 people didn’t stay good?!

21. #Panahian: This is a test of God. It is to build your Basirah, wisdom, analysis.

22. #Panahian : This is a test to get us ready for the Imam. His followers have to be at the height of basirah. When he comes just by one word of his we should all be there already.

23. #Panahian: On that note we pray that Allah sends us more difficult tests so the Imam can come back quicker. Get the Imam closer to us, and us closer to him.

24. #Panahian: We don’t just ask for the return of the Imam, we beg Allah to send us the fitnah of the end of times so we can reach the Imam quicker.