A Closer Look at Worship 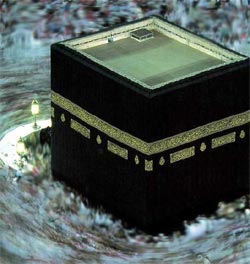 Worship is an act, which we outwardly consider as a type of humility, but it has deeper profundity. Worship stems from the soul; it springs from gnosis; it emanates from cognition; it originates from piety; it radiates from adoration; it derives from admiration; it comes from seeking refuge and assistance; and it arises from the love of the perfections of the Worshipped Being

Worship {‘ibadah} is the purpose behind our creation. The Qur’an states:
“I did not create the jinn and humans except that they may worship Me.” [1]
If the work we are doing is for the sake of seeking the pleasure of God, then it is an act of worship. It is so even though it may be a business or professional venture, the pursuit of knowledge, marriage, service to people, or anything that is meant to meet our needs or that of society.
That which makes an action an act of worship {‘ibadah} is the sacred motives behind its performance and in the parlance of the Qur’an, it has the “divine baptism” {sibghat Allah}.[2]

The Profundity of Worship

Worship is an act, which we outwardly consider as a type of humility, but it has deeper profundity.
Worship stems from the soul; it springs from gnosis {ma‘rifah}; it emanates from cognition; it originates from piety {taqaddus}; it radiates from adoration; it derives from admiration; it comes from seeking refuge and assistance; and it arises from the love of the perfections {kamalat} of the Worshipped Being {ma‘bud}.
Yes, worship is outwardly a simple act, but if it is other than the above, worship will not be entertained by man. Worship means emptying the heart of material things, letting the spirit fly, and allowing the feet to make steps beyond the seeable and hearable things. Worship guarantees the love of man whose politeness in relation to his Lord is sometimes expressed through eulogy and adoration; at other times through glorification {tasbih} and sanctification {taqdis}; and yet at some other times, through gratitude and gestures of submission.

Imam‘Ali (‘a) says:
“May I get blind if after having passed so many years of my life (and with the possession of all talent, capabilities, facilities, intellect, knowledge, and inspiration), I now turn into an animal in human form!”
Yes, civilization, technology and the progress of new instruments have made life more comfortable, bestowing comfort and welfare as a gift (to us), but does the perfection of man lie in attaining such material comforts?
If this is so, then the animals are more advanced than man in food, clothing, habitation, and the satisfaction of carnal desire!
In terms of food, they eat better, are more comfortable, and have no need of cooking and preparation!
In terms of clothing, they have no need for sewing, washing and ironing!
In terms of carnal desire, they satisfy it without difficulty and predicament.
In procuring a place for habitation, there are so many birds and insects whose technique in making nests and dens astonishes man.
In essence, has this technological advancement brought about progress in our humanness as well?
Have individual and collective corruptions lessened?
Has this comfort also brought tranquility?
In any case, just not placing the hand of man in that of the infallible and just leaders would be an injustice to humanity, if the heart of man is not linked to God, an insult would have been made to the station of humanity.

The pleasure of God as the axis of worship

Just as heavenly bodies and the earth always have a fixed axis though they make diverse rotations and revolutions, worship, with all its various forms and appearances, is also anchored in a fixed axis, which is the pleasure of God. This is in spite of the fact that spatial and temporal as well as individual and collective circumstances determine the type of movement along this axis.
For example, travel makes (a four-cycle {rak‘ah}) prayer a two-rak‘ah prayer; illness may necessitate changes in the form of the prayer. Yet, the two-rak‘ah or shortened prayer is still a prayer and it is based on the axis of remembering God, seeking His pleasure and performing His command:
“And maintain the prayer for My remembrance.” [3]

The Spirit of Worship

Worship is the nourishment of the soul and the best food is that which is absorbed by the body. Similarly, the best act of worship is that which is internalized by the soul; that is, if it is performed with enthusiasm and presence of heart. Eating too much food is not beneficial. What is important is eating useful food.
The Holy Prophet (S)[14] said to Jabir ibn ‘Abd Allah al-Ansari:
Indeed this religion is firm. Therefore, act moderately in relation to it (and when you have no spiritual readiness for worship, do not impose it on yourself) so that the worship of Allah would not be detested by you.[4]
In another hadith, we also read that the Holy Prophet (S) said:
“Blessed is he who loves worship and is always fond of it.”[5]

The spirit of worship and devotion remains alive when man is moderate in its performance. This has been narrated in the books of hadith under the heading, bab al-iqtisad fi’l-‘ibadah {section on moderation in worship}.[6]
Man is healthy when there is proportionality in his bodily limbs, and if a certain body member is bigger or smaller than the normal size, it is considered deformed (or defective in general). In spiritual affairs, man should also harmoniously nurture all that is valuable in himself.
It was reported to the Holy Prophet (S) that under the pretext of worship, a group of his ummah {community} had abandoned their spouses and children and had secluded themselves in the mosque. The Prophet stated in a loud voice: “This is not my way and method. I myself am living with my spouses and reside in my house. Anyone who acts contrary to this does not belong to me.”[7]
Imam as-Sadiq (‘a) narrates the story of a Muslim who had a Christian neighbor that embraced Islam. That Muslim had awakened the former Christian during the first dawn (prior to the time for the dawn prayer {salah as-subh}), brought him to the mosque and said to him: “Perform your supererogatory night prayers {tahajjud} till the time for the dawn prayer and thereafter, engage in supplication {du‘a’} till the sunrise.
Then, read the Qur’an up to the time for the noon prayer {salah az–zuhr}.” In this manner, the Muslim urged the former Christian to engage in prayer, recital of the Qur’an and supplication day and night. When the new Muslim returned home, he abandoned Islam and did not go to the mosque anymore.[8]
Yes, such extremism and lack of moderation in worship will drive people away.
The martyred professor, Murtada Mutahhari,[9] narrates that ‘Amru ibn al-‘As had two sons. One was a votary of Hadrat ‘Ali (‘a) while the other was a supporter of Mu‘awiyah. One day, the Prophet (S) said to the good son of ‘Amru ibn al-‘As (named ‘Abd Allah): “I have heard that you spend your night in worship and your day in fasting.” He said: “Yes, O Messenger of Allah.” The Prophet (S) said: “This way is not acceptable to me.”[10]
We read in the traditions:
“Indeed, there is inclination and disinclination in the heart (of man).”[11]
You have to take advantage of wherever it inclines and leans to. And whenever it is not ready, do not exert pressure on it otherwise it will unconsciously show a negative reaction.
In the Islamic instructions it is mentioned that you have to divide your time into four parts, and allot time for entertainment and enjoyment, for if you do so, you will also have enthusiasm for other activities.[12]
The Holy Qur’an gives the title of “violators” to the Jews who engaged in work and went fishing during the Sabbath Day:
“And certainly you know those of you who violated the Sabbath.”[13]
In any case, keeping zeal and ardor in worship is a principle which comes into being through moderation.
—
Source: Selected excerpts from the book ‘A Commentary on Prayer’ by Muhsin Qara’ati.
Notes:
[1] Surah adh-Dhariyat 51:56. In this volume, the translation of Qur’anic passages is adapted from Sayyid ‘Ali Quli Qara’i, The Qur’an with a Phrase-by-Phrase English Translation (London: Islamic College for Advanced Studies Press, 2004). {Trans.}
[2] Surah al-Baqarah 2:138: “The baptism of Allah {sibghat Allah}, and who baptizes better than Allah? And Him do we worship.”
[3] Surah Ta Ha 20:14.
[4] Bihar al-Anwar vol. 71, p. 212.
[5] Bihar al-Anwar vol. 71, p. 212.
[6] Al-Kafi, vol. 2, p. 86.
[7] Al-Kafi, vol. 5, p. 496.
[8] Murtada Mutahhari, Sayri dar Sireh-ye Nabawi {A Survey of the Life Conduct of the Prophet (S)}, p. 213.
[9] Ayatullah Murtada Mutahhari (1298-1358 AHS) was a scholar of unusually wide learning, a prolific writer, eloquent speaker, lecturer, and a cherished student of Imam Khomeini. He was a leading member of the Revolutionary Council until his assassination on May 1, 1979 by the terrorist Furqan group. {Trans.}
[10] Murtada Mutahhari, Taharat-e Ruh {Spiritual Purification}, p. 122.
[11] Bihar al-Anwar, vol. 78, p. 357.
[12] Bihar al-Anwar, vol. 14, p. 41.
[13] Surah al-Baqarah 2:65.