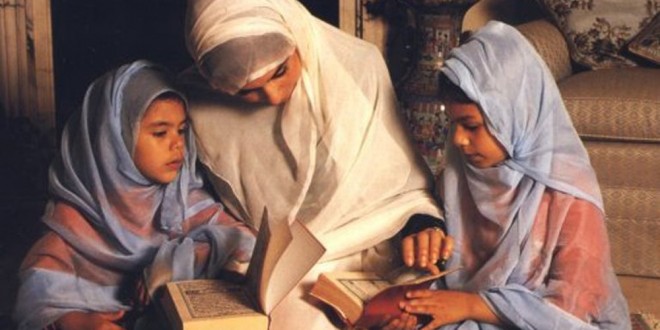 When Amy Chua’s now infamous article entitled “Why Chinese Mothers Are Superior” appeared in the Wall Street Journal, it created a furor of discussion and criticism. Though born in America, she considers herself to be a typical “Chinese mother”, and puts forth the thesis that children of Chinese mothers are smarter and more successful in life because they are subject to very rigid restrictions at home. Free time is scheduled with activities that parents feel will equip the children with useful skills, and anything goes when it comes to ensuring the children carry out these activities.

Much of what is presented in the article as valid methods of parenting has no place in Islamic teachings. There is a lot that can be commented on; however, it is perhaps more useful to analyze some of her themes in light of the teachings of the Prophet and his Holy Household (peace be upon them all).

Although Amy Chua does not clarify at what age her children were forced to spend their free time studying or practicing their musical instruments, her article gives a general feel that in order for a child to grow into a successful adult, his or her free time must be spent in honing academic or practical skills. We see in the narrations of the Ahlul Bayt that early childhood is primarily a time for play, and not direct education. Scholars quote the following saying of the Prophet when making this point: “Allow your child to play for seven years, and teach him the Book in the second seven years…” (Al-Kafi, vol. 6, p. 47) Playing, free and unstructured play in particular, is extremely important for the growth and health of a child. Other traditions discourage restricting and interfering in a child’s play, and praise parents who sit on the ground and play with a child. Unfortunately, the society around us often pushes parents to begin academic education at a younger and younger age. There are even educational CDs geared towards babies who are still in their mother’s wombs! And from the moment a child enters the world, there is a frantic race to get him ahead by using every opportunity to educate the child.

Of course, there is nothing wrong with sitting down and reading to your baby, or teaching your toddler her ABCs. But this needs to be done in an environment of fun and play, with the understanding that the first few years are not the primary time for academic learning. Children who are not subject to tirades of orders and restrictions, and who are allowed to play to their hearts’ desire can then enter the second stage of their childhood thirsty for knowledge and ready to listen to their parents and teachers. On the other hand, there is a fear of the effects on a child who has been dragged from one extracurricular activity to another, and tutored whenever possible. He/she will learn to have disdain for education at an early age and – more alarmingly – may always harbor an unfulfilled desire to play and to remain a child, and he/she will be reluctant to take on the responsibilities that come with age.

Among the more disturbing points put forth by Amy Chua is that yelling, threatening, name-calling, and even preventing the fulfillment of basic needs such as water and bathroom breaks are valid methods for coercing a child to practice the skills that are necessary for success. She goes so far as to say that because Chinese mothers assume strength and not fragility, they do not fear their children’s self-esteem will be affected by calling them names such as “fatty” and “garbage”.

On the contrary, what we see in the practice and traditions of the Ahlul Bayt is a very different method of parenting, one that encourages us to behave inside the home with the same courtesy and consideration that we do outside the home. Parents are encouraged to refrain from giving orders as much as possible in the first seven years, using methods such as distraction in order to discipline. Even in later years, when children need to be taught both academic knowledge and acceptable behavior, parents are continually reminded to do so with love and respect. The Prophet has said, “The best of you is the one who is best to his family, and I am the best to my family” (Wasail al-Shia, vol. 20, p. 171), as well as, “Be respectful to your children, and interact with them with respect.” (Bihar al-Anwar, vol. 23, p. 114)

Amy Chua’s justification for harsh coercion methods is that a child who is pushed and forced to do something enough times will eventually succeed and that, because Chinese parents assume strength, they do not worry about the negative consequences of such coercion. However, we learn from Islamic literature that a child’s capability and character should be considered when certain tasks and responsibilities are placed on him, and that undue force can have negative long-term consequences on the child’s self-esteem, character, and relationship with his parents. In a beautiful saying the Messenger of Allah says, “May Allah bless him who helps his child in doing good.” He was asked, “How can he help him in doing good?” to which the Prophet answered: “That he accepts the little that he can do, he forgives whatever he cannot do, he does not overburden him, and he does not demand too much from him, for there is nothing between him and entering a dimension of disbelief other than [due to the behavior of his parents] he disobey his parents or cut ties with his kin.” (Al-Kafi, vol. 6, p. 50)

As followers of Islam, we are doubly fortunate to have not only the examples of our Prophet, Lady Fatima (peace be upon her) and the Imams, but also scholars who often raised their children in circumstances not so different from ours. One such scholar is Allama Tabatabai, one of the most prominent thinkers of philosophy and contemporary Shia Islam, and author of Tafsir al-Mizan [Quranic Exegesis]. From the accounts of his children who say his behavior was completely in line with the teachings of the Ahlul Bayt, we can gain insight into his behavior inside the home and into how different his parenting style was from that put forth by Amy Chua. About his playful nature at home, his daughter recalls, “With his children he was so playful that when we were children, sometimes we used to think that Haj Agha doesn’t even know his alphabet.” About his tone of voice and the names he called his children, she says: “He never became angry, and we never heard him raise his voice while speaking. While he was gentle, he was also decisive and firm… He was particularly respectful and loving towards his daughters, such that he would call them by adding the word Sadaat to their name.”

Similarly, Imam Khomeini’s daughter says: “Imam (Khomeini) used to tell my daughter who used to complain about the mischievousness of her child: ‘I am ready to exchange the reward that you get by bearing the mischievousness of Husayn with the reward of my worship.’  He believed that children should be free until they became older, and then limits should be set for them.”

Finally – and perhaps most importantly – the article is based on the assumption that children of Chinese mothers are more successful because they achieve better grades in school and go on to attain academic, and presumably financial, success later in life. As Muslims parents, we too encourage our children to achieve excellence in all areas, including academics. However, we cannot limit ourselves and our children to such a shallow and materialistic understanding of success, one that values worldly achievement at the cost of the hereafter. An Islamic understanding of success is one that encourages a child to first and foremost carry out his duty in front of his Creator. After all, how successful is a child who is so busy with extracurricular activities that she rarely gets an opportunity to pray – let alone pray on time – or a child whose critical thinking skills are so “astute” that they prevent him from accepting the need to submit to the will of his Creator? Financial success is not necessarily an indication of the special blessings of God, but rather a result of the system of cause and effect that exists in this world and is available to all who make use of it. It does not guarantee contentment and satisfaction in this world, and when desired alone, it may come at the cost of the hereafter. “Whoever desires this transitory life, We expedite for him therein whatever We wish, for whomever We desire. Then We appoint hell for him, to enter it, blameful and spurned. Whoever desires the Hereafter and strives for it with an endeavor worthy of it, should he be faithful – the endeavor of such will be well appreciated. To these and to those – to all We extend the bounty of your Lord, and the bounty of your Lord is not confined.” (Holy Qur’an, 17:18-20)

Amy Chua’s article ends with the conclusion that, while Western parents respect and support a child’s individuality and choices, Chinese parents prepare their children for the future by arming them with skills, work habits and confidence. As Muslim parents, let us pray that we can use the teachings of our Prophet and his Holy Progeny to follow a unique path that includes elements from both styles – and that we prepare our children for success in this life and the next.