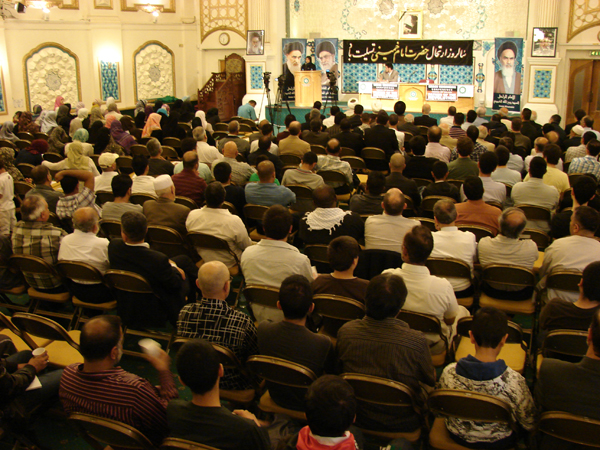 In the Name of Allah, the Beneficent the Merciful
On 26th April 2013, an organisation labeling itself ‘Stand for Peace’ issued a news item defaming the Imam Khomeini Conference, and termed the conference speakers as ‘extremists’ and ‘anti-Semites’.
The AhlulBayt Islamic Mission (AIM) issues this statement to clarify its stand and response to these baseless allegations.
AIM prides itself for being active in campaigning against religious extremism, sectarianism, intolerance and racism both locally and universally. We have been consistent in our efforts to spread peace, tolerance and co-existence; and to promote social harmony as contained in our rich and abundant Islamic heritage. Since its inception, our organisation has been steadfast in promoting this message because these values are enshrined in the Islamic teachings that we uphold.
In this regard, we wish to reiterate our position of disassociation from all forms of racism, bigotry and discrimination. We unequivocally condemn those who partake in such; be that through word or deed. It is also important to mention that AIM is committed to working with all faith groups and communities and has previously invited personalities from different faiths to speak at its events.
The Imam Khomeini conference is an event to commemorate a profound Islamic scholar who was comprehensive in his knowledge of the various Islamic disciplines and stood as a leading religious authority for millions of Muslims. On this basis, AIM commemorates his life to learn from the heritage of ideas, thoughts and legacy that he left behind.
We strongly disagree with the notion that Imam Khomeini was anti-Semitic because he practically showed a lot of admiration and respect for other faiths, races and communities; including enshrining the legislative representation of the Abrahamic faiths and their rights to practice freely within the post-revolution Iranian constitution. In addition, it is noteworthy to mention that Imam Khomeini’s lineage traces him back to Prophet Abraham, by default making him a ‘Semite’.
Those making such absurd accusations, as is clear from their language, have political motivations and are driven by a clear agenda. In recent years, we have witnessed concerted efforts by certain actors, both within and outside the UK, to conflate any criticism of the criminal actions of the Zionist state with anti-Semitism. This is done intentionally to muffle any reasoned debate about a lingering occupation that has lasted more than 40 years, and continues to exact untold suffering on the lives of innocents on a daily basis.
According to our understanding, it is precisely this irresponsible behavior that incites hatred and destroys the united fabric of our society; and to this we shall not remain silent. We believe such entities intentionally seek to fuel divisions, stifle alternate voices and defame organisations that seek to make a positive contribution to society.
It is shameful to see this type of defamatory language used by those claiming to stand for peace. We hereby categorically state that the charges of anti-Semitism raised against the conference speakers are unfounded and absolutely false. Accordingly, these individuals are entitled to resort to legal action against ‘Stand for Peace’ for the libelous accusations it has raised against their good names. To this end, we as AIM shall unreservedly extend all possible assistance within our means to these speakers. Further, any accusations made directly against the AhlulBayt Islamic Mission (AIM) shall similarly be dealt with through legal recourse, at our discretion.
Finally, we wish to remind ‘Stand for Peace’ that the fight against “violent and nonviolent forms of extremism” should be universal. Whilst applauding their admirable goals, we are truly surprised that mention of the violent extremism of ultra-right wing Zionist zealots is glaringly absent in their coverage. These zealots routinely perpetrate violent acts of extremism that shamefully include—but are certainly not limited to, the terrorizing of innocent school children. Such attacks have prompted volunteers of international humanitarian groups to escort children to and from school to save them from the mindless violence of these Zionist extremists. We thus look forward to the timely inclusion of such indefensible acts of bigotry in the forthcoming coverage of extremism from ‘Stand for Peace’.
18th May 2013
AhlulBayt Islamic Mission (AIM)