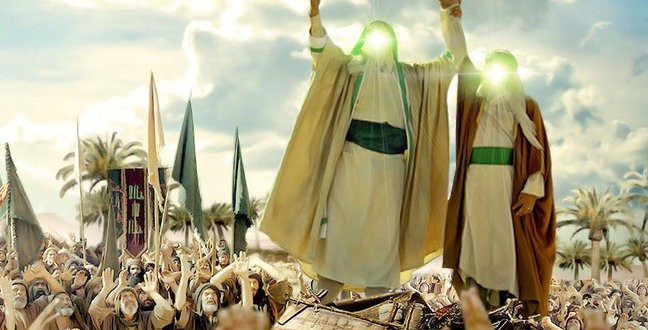 An ethical discourse on the occasion of Eidul Ghadir

We are on the heels of the commemoration of the glorious event of ‘Eidul Ghadir. May Allah (SwT) make this a graet day of celebration for all of the Shia, and grant us all the ability to follow in this school of thought which aims to make us true human beings. The ethical tradition and verse of the Qur`an on the occasion of ‘Eidul Ghadir concerns the greatness of the Commander of the Faithful,’Ali b. Abi Talib (as).

“He (Allah) it is who has strengthened you (Muhammad) with His aid and with (the company of) the believers. And (moreover) He has put affection between their hearts (the believers). Now if you had spent all that is in the Earth could you have produced that affection?  But Allah (alone) has done it…”1

In this verse, the Noble Qur`an was speaking directly to Prophet Muhammad (S) and saying that one of the miracles of this great personality was his ability to bring the hearts of the true believers together; and in addition, they also rose up to assist the Prophet (S).

The word “بنصره” translated as “with His aid” points to the Hidden help and assistance which was given (to the Prophet (S)) in various battles that he fought and even in other non-wartime events such as the event know as Laiatul Mabit (the night that the Prophet migrated from Makkah to Madinah). If the help of the Divine was not present, then it is very difficult to say if the Prophet (S) would have been saved (on that night), or not.

Allah (SwT) assists the true believers – actually not all of the believers – rather, only those believers whose hearts are united with one another!  In continuation, this verse tells us that the joining of the hearts was not something which the Prophet (S) did by himself, rather, this was brought about through the power of Allah (SwT).

We see that during the time of ignorance of the ‘Arabs, there was a great deal of animosity for one another and this hostility was even inherited and passed down from one generation to the next and (even generations later), revenge would be taken against another tribe. Such a hatred and animosity that existed in this group of people could never be removed through the normal means at one’s disposal. Thus, Allah (SwT) said that if all that was in the Earth would have been given in charity, still the hearts of the ‘Arabs would not have been united – rather, it is through Allah (SwT) that the hearts of the believers were made into one.

In relation to this verse of the Qur’an, the late ‘Allamah Amini in his work al-Ghadir2 narrated two tradition – one which has been mentioned from the work by Khatib al-Baghdadi who is one of the most well known scholars of the Ahlus Sunnah, and another tradition from al-Suyuti (another well known scholar of the Ahlus Sunnah). In addition, others have also related this tradition.

Jabir narrated from the Prophet (S) that he said, “One thousand years before Allah created the heavens and the Earth, it was written on the Door of Paradise: ”There is no creature or entity worthy of worship except Allah, and Muhammad is the Messenger of Allah and I have strengthened him (Muhammad) with ‘Ali.”

The Divine Throne is the point where the beginning of creation took place and Jannah (Paradise) is the end of the path – meaning that from the beginning to the end (of this universe), the entire trail or pathway is emblazoned with the name of Allah (SwT), the Prophet Muhammad (S) and Imam ‘Ali (as). This points to the fact that ‘Ali (as) was trained and brought up as the helper, brother, assistant, supporter and protector of the Prophet (S), and in instances where everyone else ran away, it was only ‘Ali (as) who stayed to defend the Prophet (S) and the best example of this was during the battle of Uhud.

What is the difference between assistance (نصرت) and confirming (تأييد)?  If these two words are used separate from one another (not in one sentence), then they carry the same meaning. However, when they are used together, then the meaning of confirming (تأييد) is to help one in spiritual affairs while assistance (نصرت) is in the meaning of the physical help one gives to another person.

This tradition quoted above has a message for everyone and it tells us that ‘Ali (as) did not reach to the rank that he possessed for nothing. Rather, through his helping the religion of the Prophet (S), he reached to that grand status.

Helping the religion of the Prophet (S) is not achieved through holding gatherings (majalis) to commemorate joyous occasions in the Islamic calendar, nor is it achieved through simple recitation of poems, nor even going for Ziyarat. Rather, that person who claims to be of the Tashayya’ (Shia), must traverse on the path of being a fighter for the religion, especially during our present time where various types of attacks are being leveled against the Shia, and those things which the Shia hold sacred.

Of course, this enmity against the Shia clearly shows that the spread of the teachings of the Ahlul Bait (as) and the Shia beliefs are on the increase and thus, the enemies have also risen up against us and our beliefs.

One of the proofs of the truthfulness of the Shia beliefs is the sources and references for all of our beliefs can also be found in the books of the Ahlus Sunnah. In addition, all of the spiritual greatness that have been recorded about the Ahlul Bait (as)  in our books are also mentioned in their books!

When it comes to defending the issue of Wilayah and the teachings of the Ahlul Bait (as), we must do so with logic and related proofs and continue such discussions with a cool head and complete control of our entire presence.

It is our hope that Insha-Allah, we are able to be living examples of “أيده بنصره” and that we too can assist the school of the Ahlul Bait (as)!