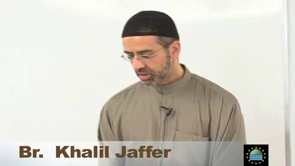 An interview with Brother Khalil Jaffer

Brother Khalil Jaffer has made many journeys. From Kenya to Dubai to Toronto and from software developer to lecturer to what some people like to call him, an inspirational role model.

Times of Wali sat down with Jaffer as he discussed the role of leadership and youth in the community and his own efforts in how to incorporate Islam in our daily lives.

Most of us already know Jaffer for his soul-inspiring lectures and public speaking is something he is very adept in, so we asked him how he started it all.

After completing my [post-secondary] studies, I trained as a lecturer in college, and gave evening lectures. This gave me a good grounding. What really spurred me on was the Iranian revolution in 1979. What the youth don’t realize is that before the revolution, religion was more traditional and cultural, there was a lack of awareness. But after the revolution, as it was exported out, there were more books to read, more to understand and so on. I took a very strong interest in religious studies. It’s also partly because my family was always active in religious and community affairs.

As a speaker, what do you see as your role in the community?

Many people are not aware of our rich Islamic heritage. We have access to so much material. This has to be accompanied with continuous active interest so I suppose, my role would be to expose the community to this abundance of knowledge.

I am currently involved in a long-term [Quran] tafseer project, which will help meet the needs of our community as well as non-Muslims. After which I plan on also starting a tafseer class to disseminate what we’re putting together.

Many youth in our community see you as a role model. What would you like to say to them?

A lot of times people interpret this hadith in the wrong a way, it doesn’t mean that we should do acts simply for this world right now…we can always do actions for this world but what matters is that we act on what we need for the hereafter nowor otherwise we will regret it later.

Speaking of role models in the community, where do you see this community in the next generation?

I would say the future lies in more activism, more outreach, interfaith dialogue and so on. We have to share the message of Ahlulbayt, because it is something we have been blessed with. It is our role to further it. We have remove this immigrant mentality that it only belongs to us, and that the Ahlulbayt are only for us. One good vehicle for this is the TMA, it brings together Shia youth from across different ethnicities. It brings them together. The youth in TMA are intellectuals, who will be our future leaders. And since the environment of a university is a neutral ground, it is a great place to do dawah, rather than at mosque where you aren’t really catering for the needs of the wider community. Lectures at universities are the way forward.

Moving forward, the month of Ramadhan has just passed, and sometimes there is a sense of relief, either from the physical pangs in our bellies or what we view as spiritual restrictions. What would you say is the best way to continue with our spiritual struggle after Ramadhan?

Brother Khalil Jaffer couldn’t help but let out a chuckle.

The very fact that we need relief shows that we have an issue. The month of Ramadhan is special, in various ways. It brings with it the social aspect, of being able to have iftar together [and aside from fasting] there is increased recitation of the Qur’an and we frequent the mosque more often. We listen to more lectures at mosque and so on and these can be continued.

And what about Eid?

Eid is our Thanksgiving. For me, we will spend our time doing three things: reflecting on the month, spending lots of time with family and putting together “new year’s” resolutions. A lot of people choose set their resolutions on the first of January or the first of Muharram, being the beginning of the Islamic calendar, but Eid is a good day to do so. Ramadhan brings with it lots of Quranic recitation, good deeds and so on so setting a goal on Eid day helps [us to] continue these goals.

The word “eid” itself comes from Awda, which means turning back to God. Since Ramadhan makes us give up our addictions, it is much easier to pursue our resolutions.