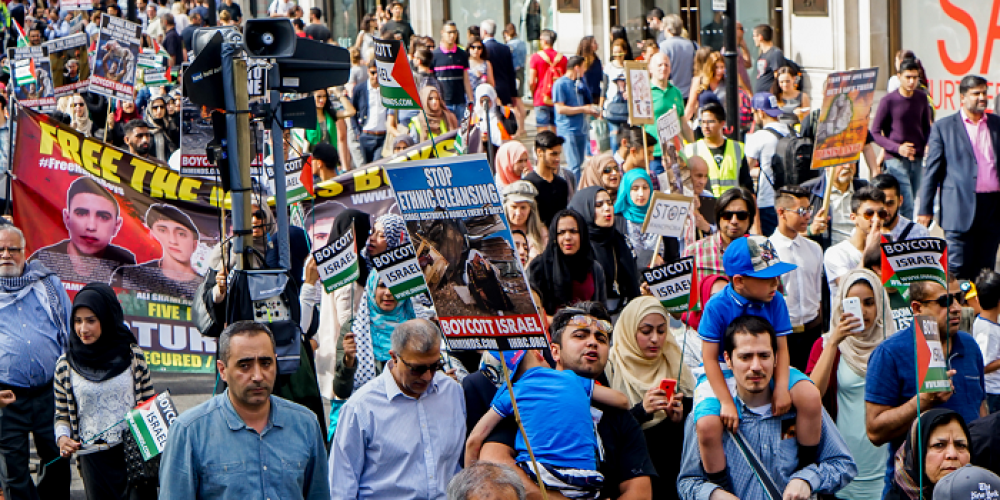 Attend the Quds rally and resist against Zionist groups 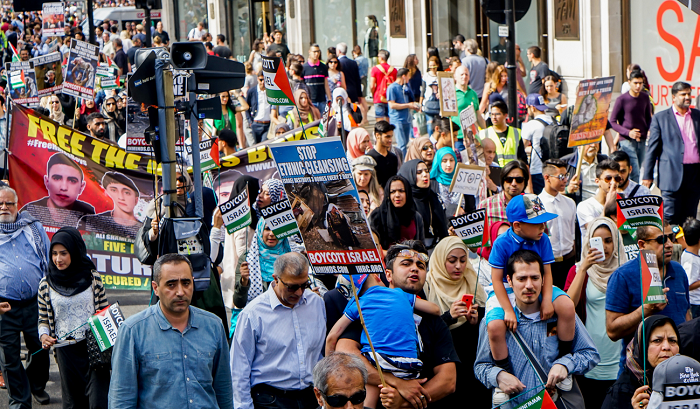 The Zionist lobby in Britain has repeatedly proven its extreme fragility. There have been consistent attacks on individuals that speak out against the apartheid state of Israel, its genocidal policies, and its supporters initiated by the Zionist lobby on numerous occasions. You’ll notice that almost every criticism of Israel is being categorised as “Anti-semitic” – a tool to demonise vocal individuals. We have witnessed these groups employing tactics to destroy the credibility of many reputable personalities, Ken Livingstone, the former Mayor of London, is a recent victim of a vicious smear campaign that resulted in him facing expulsion from the Labour Party and later resigning altogether. You see, one of the fundamental objectives of Zionists around the world is to silence voices, and to manipulate the masses, and if we let them – they will win. More importantly, they want you to be instilled with fear – for this will  prevent you from exercising your right to speak and act freely.

On 6th December 2017, Ayatollah Khamenei said in a speech at the 31st International Conference on Islamic Unity: “Their [the enemy’s] announcement of Jerusalem as the capital city of [Zionists] occupied Palestine proves their weakness and inability. In regards to Palestine, they are helpless and unable to achieve their goals.” This eloquent statement by the Supreme Leader of Iran demonstrates why the Zionists in Britain (and elsewhere) are adamant on destroying any individual that fearlessly condemns Israeli atrocities.

The continued attack on the Al-Quds Demonstration

Many Zionist entities are exhausting their efforts to have the Al-Quds rally in London banned. In 2017, a petition was created by ‘North West Friends of Israel’ demanding Sadiq Khan, the London mayor, to ban the rally and to have the flag of Hezbollah banned from being displayed. This petition has received support from over 24,000 people. Sadiq Khan wrote to Amber Rudd (Former Home Secretary) in support of these groups, and the letter, dated 11th July 2017, begins by stating “I am writing to make strong representations on behalf of London’s Jewish community and others who have legitimate concerns about the Al Quds Day March… Hezbollah is an illegal, proscribed organisation, yet many perceive that it was actively celebrated during the Al Quds Day March.” The entire letter shamelessly vilified the attendees of the Al-Quds march – the same attendees that have consistently abided by British law in exercising their right to demonstrate peacefully. The concerns of the Zionist groups are not at all “legitimate” but rather explicitly discriminative towards those defending the rights of Palestinians.

Further to this, in January 2018, after being pressured by ‘Conservative Friends of Israel’, the ‘Labour Friends of Israel’ and the ‘Jewish Labour Movement’ Amber Rudd mentioned she was “sympathetic” towards those offended by the hezbollah flag that is flown in the Al-Quds rally. In April 2018, Sadiq Khan declared he will continue lobbying the government to fully proscribe Hezbollah. For those who are not aware, the UK government has proscribed the “military wing” of Hezbollah, not the “political wing”.

In May 2018, ‘Christians United For Israel’ (CUFI) launched a campaign calling on Sajid Javid (UK Home Secretary) to ban the Quds rally in London on 10th June. One of their key points mentioned is to “Ban anti-Semitic speech on the streets of London” – another example of the Anti-Semitism card being used to further the objectives of the Zionist lobby. Organisers of the Al-Quds rally have never declared anything that could be labelled as anti-semitic, in fact they have always ensured that respect to all faiths is maintained. You’ll find that there are tens of Jews, Christians, and even individuals who do not associate with any faith or belief system that proudly attend the Al-Quds march year after year, and stand shoulder to shoulder in solidarity with the oppressed Palestinians. If the annual march did condone anti-semitism it would be absolutely nonsensical for any Jewish individual to support and attend the march, no? It is beyond obvious that these malicious attacks orchestrated by the Zionist lobby have one objective: the eradication of any support towards Palestinians – and under no circumstances should we surrender to their cowardly tactics.

Further to this, just weeks before the Annual Quds march takes place, the ‘Israel Britain Alliance’ (IBA) have said that the time for “excuses” is over as they call the Government to ban the rally. One should ask themselves why there is a systematic attack taking place towards the freedom to protest, and the freedom to speak – and if government officials do choose to ban the Quds march due to the continued pressure from the Zionist lobby, then what does that mean for the rights and freedoms of peaceful, non-violent activists in Great Britain?

There are various parallels we can draw between ISIS and the Zionist forces that are occupying Palestine. In fact, Ayatollah Khamenei said the following regarding ISIS: “Our opposition to them, was opposition to oppression, opposition to those who set fire to humans and skinned them alive, to those who practiced political, sexual and complete corruption.” This statement immediately makes one think of our Palestinian sisters and brothers that are victims of the same corruption and brutality. From being sexually exploited and abused to being gunned down in the middle of a field – there is little to no difference in the methods deployed by these terrorists.

Now is the time to mobilise effectively and efficiently. It is not the time to cave under pressure, and it is definitely not the time to sit silently. History has repeatedly taught us the power of rising up. Think. Plan. Mobilise.

The culture of resistance and our duty

In the Holy Qur’an, God tells the believers to “persistently stand firm in justice” (4:135) this verse alone denotes the importance of opposing injustices. We cannot fall prey to the Zionists’ games. Rise up, speak out, and act. The people of Palestine need our support, and most importantly they need our voices, especially at a time where they are routinely muted by Western-funded media outlets and Zionist-owned platforms. The Quds day is a day designated for the oppressed, it is a day where individuals of all backgrounds come together and express their solidarity to those tyrannised around the globe, it is a day where resistance against arrogance is embodied by the young and the old. It was the father of the Revolution, Imam Khomeini that eloquently said: “The issue of Quds is not a private or personal issue. It is not the exclusive problem of one country nor a present-day problem of all Muslims. Rather, it is a phenomenon concerning the monotheists and faithful people of all ages-past, present and future.”

For years, Zionist entities have attempted to destroy the forces of resistance, and at each attempt they have been unsuccessful. Our voices, our actions, and our oath to the oppressed is a form of resistance; and it is this culture of resistance that frightens the enemy. Keep resisting, and know that no force is greater than the Almighty God.