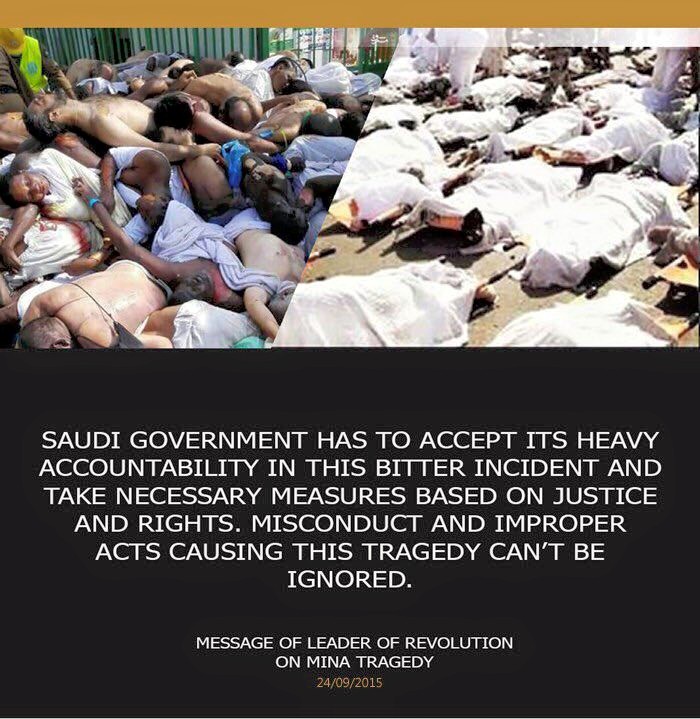 Ayatollah Seyyed Ali Khamenei, the Leader of the Islamic Revolution, has issued a statement following Thursday’s tragic mishap at Mina where a large number of God’s guests [Hajj pilgrims] lost their lives. Expressing sympathy with the victims of this sorrowful incident and condoling with their bereaved families, Ayatollah Khamenei said: “The Saudi government is obligated to accept its heavy responsibility in this bitter incident and meet its obligations in compliance with the rule of righteousness and fairness, while the mismanagement and improper measures that were behind this catastrophe should not be overlooked.”

The full text of the Leader of the Islamic Revolution’s message is as follows:

In the Name of Allah, the Most Compassionate, the Most Merciful

We are for Him and to Him shall we return

Today’s catastrophic disaster at Mina, in which a large number of the guests of the Compassionate God and the faithful people migrating toward Allah from different countries were killed, has caused big grief in the Muslim world and turned their Eid into mourning.

In our dear country too, tens of families who were eagerly waiting for the return of their dear Hajj pilgrims are now mourning their deaths. With a heart filled with sorrow and while sympathizing with the victims of this catastrophe, I offer my condolences to the pure soul of the Great Messenger [of Allah] (Peace Be Upon Him) and the sacred authority, the Master of the Time, Hazrat Sahib al-Zaman (shall we sacrifice our souls for him), who is the main party to this mourning, as well as to all bereft families and mourners across the Muslim world particularly in Iran. I pray to the Beneficent and Merciful God to bestow His special mercy on these dear guests of His and ask for rapid remedy for the injured and those wounded in this incident, and I would like to remind the Muslims of the following points:

1. Officials of my representatives office and the Hajj and Pilgrimage Organization should push ahead with their exhausting efforts for the identification of the dead and providing treatment to the injured and sending them back to the country and providing quick dissemination of information, as they were doing during the entire day today, and all those who are able to help them should do so.

2. Any possible assistance should be extended to Hajj pilgrims from other countries by Iranian officials in Hajj and they must fulfil their Islamic brotherhood obligations in this regard.

3. The Saudi government is obligated to accept its heavy responsibility in this bitter incident and meet its obligations in compliance with the rule of righteousness and fairness. Mismanagement and improper measures that were behind this tragedy should not be overlooked.

4. Those who lost their lives in this incident will be included in this luminous verse of the Quran which says, “And he who gets out of his house migrating toward Allah and His Messenger and then death overtakes him, his reward is indeed with Allah.” That’s great consolation for the grieving. They rushed to meet their Creator after Tawaf and Sa’i and after blissful hours of Arafat and Mash’ar and while performing the Hajj rituals, and God willing, they will benefit from the special grace and compassion of God.

Reiterating my condolences to the mourners, I declare three days of national mourning in the country.

And peace be unto those servants of God who do good.