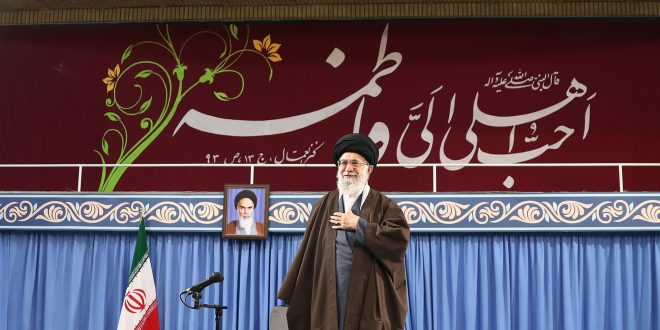 In the meeting, Ayatollah Khamenei said the spiritual status and moral greatness of Her Holiness Fatimah az-Zahra (PBUH) exceeds the bounds of human understanding and added:

“The lofty status of the daughter of the Great Prophet must be heard and learnt from God Almighty and divine messengers, just as the Prophet described her with the lofty expression of the most superior heavenly women and Shia and Sunni both agree on the veracity of this account.”

He pointed to the naming of the birth anniversary of Her Holiness Fatimah az-Zahra (PBUH) as Women’s Day, saying that in Islamic logic, women enjoy a complete framework. He added, ‘Islamic Woman’ is a being that has faith, chastity, spiritual and scientific growth and is influential in society, family manager and source of peace of men and besides these possesses womanly characteristics such as delicacy and readiness to receive divine beams.”

The Leader of the Islamic Revolution said the role model of Muslim women are great women such Their Holinesses Fatimah az-Zahra and Khadijah al-Kubra, the first wife of the Prophet, and added:

“In contrast to the Islamic role model is the perverted Western role model, which in place of all of the outstanding and grand characteristics of Muslim women, has features such as nudity and seduction and pleasing men in itself.”

He said obliging men to wear full attire and encouraging women toward more and more nudity in official Western meetings is an example of leading Western women toward dereliction and debauchery, adding:

“Today, Western women is the manifestation of consumption, makeup, exhibition before men and a tool for sexual excitement.”

Ayatollah Khamenei described issues such “gender equality” in Western rhetoric as superficial and devoid of truth and pointed to the acknowledgement by a great numbers of high-ranking Western women in the past few months to having been subjected to abuse and violence during administrative affairs, saying:

“Through hijab, Islam has closed the door to this point of diversion; therefore, Islamic hijab is a means for women’s immunity not their restriction.”

He stressed that Iranian women bear the flag of identity and cultural independence, adding,

“By preserving their hijab, Iranian women declare their identity and cultural independence to the world and announce this new statement that women can have an active and effective presence in social circles by safeguarding their hijab and chastity and preventing the exploitation of stranger and avaricious men.”

The Leader of the Islamic Revolution criticized those who belittle the family institution and pretend that “sexual equality means women be present in whatever arena where men are present.” He said this endeavour is a betrayal of women and their sanctity and personality, adding,

“Women are respectable and no one is against their presence in social circles and studying sciences and assuming responsibility.”

He added, “It is the Islamic Revolution success that today Iranian women are among the best scientists and cultural figures, because this was not the case prior to the Revolution and there were a very limited number of outstanding women in cultural and scientific circles.”

Ayatollah Khamenei described women as the manager and pivot of the family and said women’s most important responsibility and duty is their motherhood, wifehood and the creation of peace in the family. He urged Iranian women to “maintain and reinforce Islamic concepts and Quranic frameworks about women and keep them away from blight such as prodigality, negative rivalries and following the example of the deviant Western women.”

Continuing, he said forty years of ceaseless and unique enemy plots against the Iranian nation and at the same time the daily growth and progress of the virtuous tree of the Revolution as a source of pride and a sign of God’s grace and added,

“Since several months ago, the enemies of Iran had gathered in think tanks and hatched plots for the last three months [of the Iranian calendar] year, so that in their own assumption, they would finish off the Islamic Republic in the month of Esfand (February 20 – March 20).”

The Leader of the Islamic Revolution added,

“You witnessed how people responded to them in the months of Dey (December 22 – January 20) and Bahman (January 21 – February 19) and the Iranian nation is always ready to cut any aggressor and invader down to size.”

He then stressed that everyone, including Iran’s enemies, is aware of the solidity of the country and its reliance on the people and youth and the path of the great late founder of the Islamic Republic Imam Khomeini and expanded on the dimensions and goals of enemy designs to attack the independent and cultural identity of Muslim women, namely the issue of “hijab”.

Ayatollah Khamenei pointed to the extensive enemy propaganda and whopping expenses to negatively impact the issue of hijab, saying, “They put in so much money, thought, and propaganda for a few girls to be deceived and remove their headscarves here and there and all of their efforts were summed up in this trivial and petty outcome and this is not an issue; however, what alarms me is the raising of the issue of “compulsory hijab” by some of the select.”

“This group of people, which include journalists, so-called intellectuals and turbaned mullahs, are following the same line that the enemy failed to bring to fruition after all those expenses and God willing they did this unwittingly.”

The Leader of the Islamic Revolution dismissed these people’s claims that the edict of the late Imam about women’s hijab did not include all women, saying,

“This statement is wrong, because we were present in those days and know that the great Imam, as in every ill, stood tall against this blatant vice, which had been established by the Pahlavis and their cronies, and said hijab must exist.”

“The Islamic establishment does not intervene when an individual does not wear hijab in the presence of strangers; however, what is done in the streets and in public view is in fact a public action and coaching and creates responsibility for an establishment rooted in Islam.”

“There is no small or big haram (prohibited by religion) deed and what is forbidden by religion should not be openly carried out, because the Islamic lawmaker has obliged the government to prevent public execution of haram deeds.”

He dismissed comments by some individuals that people should be allowed to choose hijab themselves, saying,

“This can be said about all social sins; just like saying that the sales of alcoholic drinks should be legalized and people can drink or not according to their own will. Is this a right thing to say?”

Ayatollah Khamenei stressed that we are proud of the hijab of Iranian women and Iranian women have succeeded in achieving the highest scientific and cultural ranks and having an effective social presence with Islamic hijab and Iranian veil and at the same time housekeeping and carrying out their conjugal duties toward their husbands. He added,

“It is a big mistake that some people seek to circumvent the law to create a false and deviant desire for Western culture.”

On the same topic, he criticized some of the wrongful measures in the field of demographic and education policies, saying,

“Any violation of Islamic policies should be stopped and officials must advance the affairs such that the objectives of Islam are fulfilled not the goals of the enemies.”

The Leader of the Islamic Revolution said divine culture guarantees and ensures the independence and freedom of the Iranian nation and added,

“Dereliction and being a manacled slave to the culture of the West is not freedom; in fact freedom means preserving and following your Islamic faith ideology, culture and example.”

In the same regard, Ayatollah Khamenei pointed to the repetition of the issue of sexual equality in the speeches of Westerners and the West’s emulators and raised this question,

He said sexual equality in Islam means respecting women and not abusing them and preventing violence against women in families and stressed,

“To know what constitutes violence or not, Islamic logic and though must be consulted and not Western teachings.”

The Leader of the Islamic Revolution later issued some recommendations to the eulogists.

He pointed to the malicious hostilities against the Iranian nation and establishment and described the eulogists of the Prophet’s Household as key media in countering those animosities. He addressed the panegyrists, saying,

“You must fulfil your duties by increasing the audience’s knowledge, wisdom and faith, [advancing] political enlightenment, promoting Islamic conduct and ethics, highlighting national unity and spreading brotherhood and kindness.”

The final segment of the speech by Ayatollah Khamenei was in response to the remarks of US and European officials against Iran’s regional presence.

The Leader of the Islamic Revolution added,

In response to European officials seeking negotiations with Iran over its presence in the region, he highlighted the same point and said,

“This issue is none of your business. Is this our region or yours? What are you doing in our region? We make arrangements with regional nations, we have done so, and we have moved forward and we will keep moving forward. People should know these political issues.” 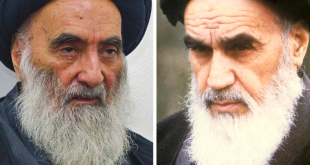