Battle for Mediation: The Political Price for the War in Yemen 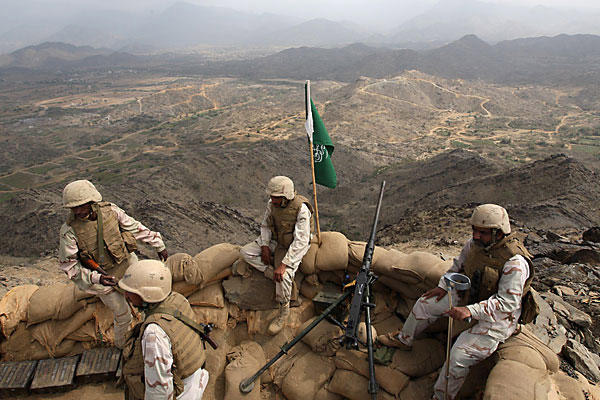 Whilst all wars have a rational “end”, some are less rational than others. The participation of the Saudi and Yemeni establishments in their war against Yemeni Houthis has been a catastrophic error – so catastrophic, in fact, as to verge on political suicide. After months of blind bombing raids, the prospects of any decisive victory disappear further into oblivion with every additional sortie.

“Operation Scorched Earth” – pitched as the sixth war between the Yemeni government and its Houthi citizens – has served to further cement the incompetence of Ali Abdallah Saleh’s government. Its failure to heed from the lessons of past has exposed it to charges of gross impudence within policy circles. Indeed, both Riyadh and Sana’a are condemned of committing the supreme crime in war designs: vanity.

Ever since its declared involvement in the war, the Saudi Kingdom has been frantically searching for an exit strategy. It took more than 70 confirmed fatalities and a growing list of soldiers ‘missing in action’ in the space of little over a month for the Al-Saud royalty to finally fling in the open its first give-away.

On 22 December, Deputy Defence Minister Prince Khalid bin Sultan suggested that the Kingdom had all but done its job, and was therefore halting all major operations. Although he did also offer a sternly worded 48-hour ultimatum to the Houthis to withdraw from the border town of Al-Jabaliya, Saudi Arabia clearly ‘wanted out’; albeit attempting its sign-off with grandiloquent hubris. To Saudi warnings, the Houthis reaffirmed their central demands which have remarkably remained consistent from the outset: ‘Saudi Arabia must put an end to its aggressions, and mustn’t allow its territory to be used by Yemeni forces in the war’.

Such firmness from the Houthis obviously wasn’t quite expected in Riyadh. Wildfire rumours less than a week later reporting the death of the Houthi leader, Abdul Malik Al-Houthi, and recent attempts to equate Yemeni Houthis with Al Qaeda can be viewed as the most recent manoeuvres by Riyadh to alter perceptions regarding the war; primarily, such propaganda is aimed at selling a romanticised image of the Kingdom.

As with all wars, peace-making is a complex business: the Saudis have to emerge victors, at all costs. Quite simply, the Kingdom has to project its forays into Yemen as a resounding victory at the hands of its brave, noble sons – the steadfastness of Houthis, however, has (up until present) given no occasion for victory speeches. One can be dead sure that a meticulous national-PR campaign recounting the heroic feats and victories is gathering dust on the shelves; fettered by the matchless bravery of the sons of Zayd.

The target of Riyadh’s PR-travails is not limited to driving in some sense of inflated national pomp or glowing praise for its countless Emirs, but is instead intended to reinforce a sense of invisibility about the Kingdom. In recounting the rashness of the decision to go to war, Saudi expert Dr. Mai Yamani stated:

“The dilemma for the Saudis is that now the damage will be much greater if they do not crush the Houthis, as this would embolden Al Qaeda. This is the biggest threat facing Saudi Arabia, but its rulers’ ill-considered war strategy has only brought that threat closer.”

Having walked itself into a minefield, Riyadh will now be measuring the backlash of its reckless decision. The increased optimism that militant Wahhabists now enjoy as a result of the Kingdom’s failures is, however, far from the real cost of war.

All wars exact a political price. In the immediate short-term, the Kingdom will in most likelihood have to pay a political price which will further eat into its fading regional influence. This cost of peace will be paid on the battlefield of mediation.

Over recent years, the Middle East has witnessed the unquestionable rise of Qatar and Turkey; two regional players who have pursued pragmatism in lieu of outright loyalty to specific ‘camps’. The steady rise of Qatar in regional equations has drawn the ire of both Riyadh and its close ally Hosni Mubarak. Successful brokering of the sensitive Lebanese Unity government package followed by an admirable stance during the Gaza war both served to build the persona of Doha.

Ankara’s rise on the other hand has been nothing short of astronomic. Following on from Erdogan’s famed Davos walkout, Ankara has focused on developing its stature on the Middle Eastern scene. The past few days witnessed the signing of hefty bilateral deals between Turkey and both of Syria and Lebanon; an indication of the country’s growing buoyancy within the region.

Therefore, in the context of the war in Yemen, any mediation deal brokered by either of Turkey or Qatar is simply an intolerable outcome for Riyadh; a result which would only deepen the wound of Saudi Arabia’s broken pride and signal its’ rapidly declining standing. Yet, the options before Riyadh are incredibly limited. Doha was responsible for brokering the last ceasefire deal between the Yemeni central government and the Houthis – from the view of pure qualification, Qatar is arguably in the best position to act as mediator. But the course of politicians is seldom chosen on merit.

What is certain is that Riyadh would regard Qatari mediation a bitterer pill to swallow than Turkish involvement on the same. In this vein, the visit of Foreign Minister Ahmet Davutoglu to Riyadh early last week can be viewed as a tentative first-step towards an eventual Turkish mediation of the crisis. Indeed upon his return from the Kingdom, Davutoglu indicated that Turkey was ready to act as a “regional actor” in order to put an end to the clashes.

Riyadh thus seems set to pay a heavy price for its madness. In addition to bringing untold embarrassment upon the Kingdom, the prospect of Turkish mediation will have sizeable regional repercussions. Should it come to pass, yet another instance of marked Turkish movement on the Middle Eastern chessboard will madden Washington, Tel Aviv, Riyadh and Cairo. Before all, Israel and its thuggish Netanyahu-Lieberman team will be the more enraged for rather obvious reasons.

The only way out for Riyadh and its allies is another act of madness. The question thus looms; will Obama oblige?

—
Ali Jawad is a political activist and member of the AhlulBayt Islamic Mission (AIM).