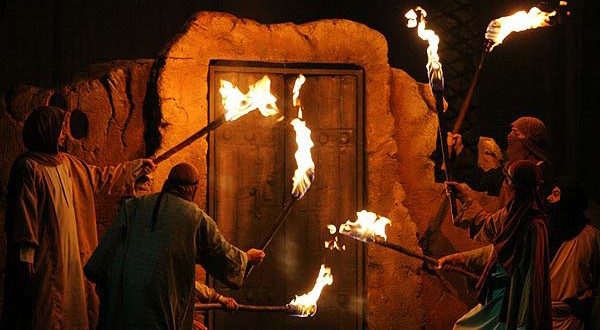 Can you provide reliable Shia and Sunni sources on martyrdom of Al-Sayyida Fatima Al-Zahra (as)? 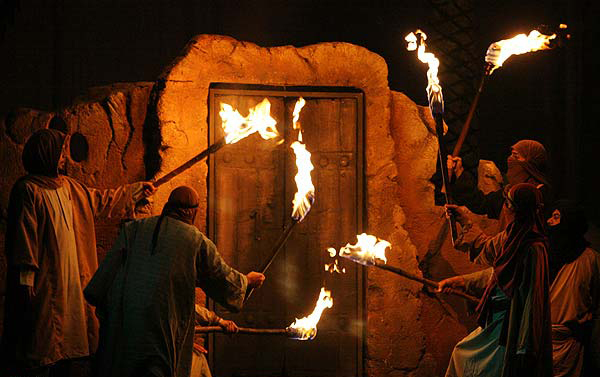 Can you please provide reliable Shia and Sunni sources on the event that led to martyrdom of Lady Fatima al-Zahra (a.s.)?

“One of the denied facts is that they (Umar and his followers) hit Fatima (the blessing of Allah be upon her) although it has been narrated that they flogged her with a strip and a famous opinion that no one amongst the Shia scholars dispute about, is that Umar hit her on her stomach (womb) until she was forced to have a miscarriage, where the miscarried baby was named Mohassan. The narration (of the event) is even famous amongst them (the Sunnis), as well as the narration of their intention to burn her house when a group of sincere companions who had refused to pay allegiance and sought refuge to her house. And no one can deny this narration because we have proven it from amongst the Sunni sources through the narration of Al-Balathari and others, and the Shia narrations are numerous and our scholars indisputably accept them.”
(Talkhis Al-Shafi 3:156)

The following are some of the related narrations from the Shia and Sunni sources:

And those whom inflict harm on the Messenger of Allah will receive a chastising punishment. (Surat At-Tawba, verse 61).

The Messenger of Allah said:

Fatima is part of me, whosoever angers her angers me! (Fat-h Al-Bari fi sharh sahih al-Bukhari 7:84, Sahih al-Bukhari – in the chapter ‘alamat an-nubuwwa 6:491, the last part of Kitabil Maghazi 8:110)

O Fatima! Verily Allah is angered by your anger and is pleased when you are pleased. (Mustadrak Al-Hakim 3:154, Majma’ Al-zawa-id 9:203)

It is also narrated:

2) The sacredness of Fatima’s house

The Messenger of Allah recited the following verse:

“In houses which Allah has ordered to be raised, in them His Name is remembered”. A man approached him and asked him, “Which houses are they O Messenger of Allah?” He replied, “The houses of the Prophets”. So Abu Bakr asked him while pointing to the house of Ali and Fatima: “Is this house included amongst those houses?” The Messenger of Allah replied: “Yes, it is the best amongst them!” (Ad-Dur Al-manthur 6:203, Ruhul Ma’ani 18:174)

The Messenger of Allah used to recite the following verse at the door of Fatima’s house for six months, and according to other narrations nine months:

“Verily Allah chooses to keep impurity distant from you Household (of the Prophet) and purify you a thorough purification.” (Ad-Dur Al-manthur 6:606)

After the Prophet died and people pledged their allegiance to Abu Bakr, Ali and Zubayr used to approach Fatima, and consult her regarding their affairs.

Abu Bakr bin Shayba said: When Umar left, they (Ali and Zubayr) returned to her. She said to them “Umar had just come to me and said that if you were to return here, he will burn the house on you, and I swear by Allah that he will do exactly what he has said.” (Al-Musannaf – Kitabul Maghazi 8:572)

An-Nassabi, commonly known as Ahmad bin Yahya Jabir Al-Baghdadi Al-Balathari (who passed away in the year 270 A.H), the author of Ansabul Ashraaf, narrates:

Abu Bakr sent for Ali to pledge allegiance to him (Abu Bakr), but he (Ali) refused. So Umar came (to his house) with a fire-lamp. Fatimaencountered him at the door (of the house) and said: “O Ibn Al-Khattab, are you going to burn the door on ME?” He said “Yes! And this (burning the house) makes what your father had come with stronger…” (Ansaabul Ashraaf 1:586)

Abu Bakr realised that a group of people who were with Ali (may Allah be pleased with him) did not pledge allegiance to him (Abu Bakr). So he (Abu Bakr) sent Umar to them who called for them while they were in Ali’s house, but they refused to come out (to pledge allegiance). So Umar ordered his men to get wood and said: I swear by the One whom Umar’s soul is in His power, you have to get out (of the house) or I will burn it down on whosoever is inside it!” Someone said to him: “O Aba-Hafs, but Fatima is inside!” Umar replied: “So what!!” And he walked with a group of his men until he reached the door ofFatima’s house and knocked on it. When she heard their voices she cried loudly: “O father! O Messenger of Allah! What is being inflicted upon us after your death from ibn Al-Khattab and ibn Abi-Qohafah?!”

When the people (who were with Umar) heard the voice and the cry of Fatima, some of them left. Umar with a few members of the group remained, forced Ali out of the house, took him to Abu Bakr and told him “Pledge your allegiance!” He (Ali) replied, “And if I don’t then what?” They replied, “By Allah whom there is no other God but Him, we will cut off your head!” (Al-Imamah was-siyasah 13&12)

The famous historian Muhammad bin Jarir At-Tabari (who passed away in the year 310 A.H) narrated:

Umar bin Al-Khattab went to the house of Ali. Talha, Zubayr and some men from the Muhajireen were also inside. He (Umar) said: By Allah, I will burn the house on you unless you go to pledge your allegiance (to Abu Bakr). So Zubayr came out with his sword drawn, but he tripped and the sword fell from his hand, so (the men with Umar) captured him and took him. (Tarikhul Tabari 2:443)

Ahmad, who is known as Ibn ‘Abd Rabbih Al-Undulosi, who is the author of the book Al-‘Iqdul Farid (who passed away in the year 463 A.H) has said:

As for Ali, Al-Abbas and Zubayr, they remained in the house of Fatima until Abu Bakr sent Umar to force them out. He (Abu Bakr) instructed Umar: “If they refuse, then fight them!” So he (Umar) approached them with a burning flame to burn the house on them. So Fatima addressed him and said: “O ibn Al-Khattab! Have you come to burn our house?!” He said “Yes! Unless you do what the people have done!” (ie. pledge allegiance to Abu Bakr).  (Al-‘Iqdul Farid 4:93)

4. The attack on her house occurs

I wish that I did not raid the house of Fatima and that I left it even if the door was closed to (plan) war.  (Al-Amwaal 144)

Abul-Qasim Sulayman bin Ahmad At-Tabrani (who died in the year 360 A.H), the author of the book Al-Mu’jam Al-Kabir, has narrated from Abi Bakr ibn Abi Quhafa:

And I wish that I did not raid the house of Fatima for any reason even if they had the door closed to (plan) war. (Al-‘Iqdul Farid 4:93)

On the day of pledging allegiance (to Abu Bakr) Umar hit the stomach of Fatima until she miscarried Muhassan. (Al-Wafi bil Wafiyyat 6:17)

I wish I did not raid Fatima’s house and that I left it even if the door was closed to (plan) war.  (Sharh Nahjul Balagha li-ibn Abi Al-Hadid 2:46)

Al-Masudi (who died in the year 325 A.H) has narrated in his book titled Muruj Al-thahab:

Abu Bakr said at the time of his death: “I wish I did not seek to raid the house of Fatima”, and he mentioned many things about that incident.” (Muruj Al-Thahab 2:301)

Ibn Abi Darim (who died in the year 357 A.H) has narrated in his book Mizan Al-I’tidal:

Umar bin Al-Khattab said “I swear by the One whom Umar’s soul is in His power, they must come out of the house or else I will burn it on whoever is inside it …!”

A group of the people (who were with Umar) who feared Allah and guarded (the teachings of) the Prophet said: “O Aba-Hafs, Fatima is inside!”

He carelessly screamed: “So what … !” He then approached and knocked on the door, then he hit the door open and invaded it … and Ali appeared to him … at that moment Fatima’s voice was heard from the doorway of the house … she was crying for help … (Abdul Fattah Abdul Maqsood: Ali bin Abi Taleb 4:276)

After Abu Bakr took the allegiance of people by force, using his sword and power, he sent Umar and Qunfuth and a group of men to the house of Ali and Fatima. Umar collected wood and put them at the doorway of Fatima’s house and burnt the door down … (Al-Imamah wal khilafah 160-161)

As for the Shia narrations, it suffices to mention a few of them.

1) Ibn Qawlawayh narrated in his book ‘Kamilul Ziyarat’ in a reliable hadith from Hammad Bin ‘Uthman from Imam Al-Sadiq (a.s.):

On the night of the Prophet’s ascension, it was said to him (the Prophet): “Allah will test you in three things” and he started counting them… then he said “as for your daughter, she will be oppressed and deprived (of her right) and her right (to Fadak) that you will give to her will be seized from her and she will be hit while she is pregnant, and her house (and privacy of her family) will be entered without permission, then weakness and humiliation will be inflicted upon her and she will not be able to prevent it, and she will miscarry her baby from all the hits she will suffer, and she will die as a result of those hits … and the murder of Muhassan bin Ali will be the first crime that the killer (Umar) will be accountable, and then Qunfuth, so they will both attend (the judgement).” (Kamilul Ziyarat 232)

2) Yunus bin Ya’qub has narrated from Imam Al-Sadiq (a.s.) that the Imam said:

O Yunus! My grandfather the Messenger of Allah said “Cursed is the one who will oppress my daughter Fatima after I die, and seize her right and kill her!” (Kanzul Fawa-id 1:149)

3) Al-Kulayni has narrated from Abi Basir from Imam Al-Sadiq (a.s.) who said:

Amir Al-Mumineen (i.e. Imam Ali) said: “Your miscarried babies whom you do not name before they die, will meet you on the Day of Judgement, and the baby will ask it’s father “Did you not give me a name?” Verily the Messenger of Allah (s.a.w.s.) named Muhassan before he was to be born.” (Al-Kafi 6:18)

4) Muhammad bin Harun Al-Talakbari has narrated in a reliable narration from Abi Basir from Imam Al-Sadiq (a.s.) who said:

Fatima was born on the twentieth day of Jamadil-akhira, forty-five years after the birth of the Prophet. And the cause of her death was that Qunfuth, the slave of the man (i.e. Abu Bakr), by the command of his master (Abu Bakr), hit her with his sword, from which she miscarried Muhassan, and she became severely ill from this event. And she did not allow anyone of those whom harmed her to enter her house. There were two of the companions of the Prophet (i.e. Umar and Abu Bakr) who asked Amir Al-mumineen (Imam Ali) to intercede on their behalf (and ask Fatima to allow them to enter). He (Imam Ali) asked her and she permitted (for them to enter). When they entered, they remarked “How are you O daughter of the Messenger of Allah?” She replied “I am well, praise to Allah”. Then she told them both, “Have you not heard the Prophet say “Fatima is a part of me, whosoever hurts her has in fact hurt me, and whoever hurts me has in fact hurt Allah”?” They both affirmed that. She said “I swear by Allah that you have both hurt me.” So they both left the house and she was displeased with them.   (Dala-il Al-Imamah 45)

5) Sayyed Bin Tawoos has narrated in his book Al-Turaf on the authority of Imam Al-Kathim (a.s.) who said: