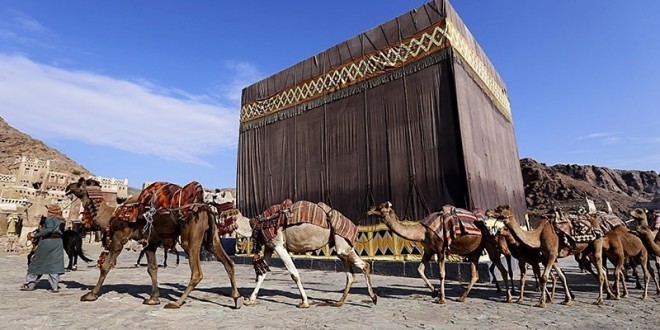 The epic film ‘Muhammad’ on the early life of the Prophet of Islam premiered in Iran this week.

Iran’s most expensive movie, “Muhammad”, which chronicles the childhood of the Muslim prophet, opened nationwide, winning praise from early audiences.

Majidi says the aim of his work, the first part of a trilogy, is to reclaim the rightful image of Islam, which he said extremists have distorted.

“Unfortunately at this time the impression of Islam is of a radical, fanatical and violent religion, which is

not what it’s about,” he said in Montreal, where “Muhammad” had its international premiere, hours after screening back home.

“The barbaric acts of terrorism conducted by terrorist groups under the guise of Islam are not related to Islam,” he said, alluding to beheadings and destruction of cultural treasures by Islamic State militants in Syria and Iraq.

“Islam is a religion of peace, friendship and love, and I tried to show this in the film.”

“Muhammad”, which captures Saudi Arabia more than 1,400 years ago, offers much more than stereotypical trains of Arabs on camels riding across yellow sand dunes.

It takes cinemagoers from the birth of the future prophet up to his teenage years, and is packed with miracles.

The crew of “Muhammad” is indicative of the film’s ambition.

In one scene, an army of tribesmen mounted on elephants charges the holy city of Mecca to heart-pounding music, only to be destroyed by a flock of crows hurling stones.

In another, intensely emotional scene, the boy heals his nanny with a touch of his hand.

“It was very moving for us,” said Mahsa Rasoulzadeh, 40, accompanied by her mother and teenage daughter at Kourosh Cinema in west Tehran.

The theatre was around two-thirds full at an 11:00 am showing on Thursday, the first day of the Iranian weekend, but afternoon sessions were sold out in advance and two more had to be added for after midnight to meet demand.

Abolfazl Fatehi, 21, who came to watch the film in a family group of seven, said he loved it.

“I think this film can be a starting point of research for those who don’t know Islam,” he said.

Mehdi Azar, a 25-year-old worker at the cinema, said that while the film’s length might put some movie-goers off, “it’s attractive enough to draw an audience. It was very attractive visually”.

The film is the second major production on the prophet.

The first, “Muhammad, Messenger of God”, was made in 1976 by Syrian-American filmmaker Moustapha Akkad.

Forty years on, with its cost around 20 times higher than any other Iran-produced film, Majidi’s effort has raised high expectations.

Despite broad early enthusiasm some felt the movie had not lived up to the hype.

“I had heard so much about it… but, to be honest, my expectations were much higher than what I saw,” said Komeil Arjmandi, 23, who is studying film direction.

“I wanted the film to rise higher than Mr Akkad’s movie.”

Yet, officials don’t want the film to be compared with others.

In order to “preserve the dignity” of the prophet, “Muhammad” was excluded from competition in Iran’s major Fajr festival in February and was instead showcased in a separate showing.

While Iran has denounced cartoons of the prophet like those published by French satirical magazine Charlie Hebdo, Shiites are generally more relaxed than Sunnis about depiction of religious figures.

Many showings of “Muhammad” in Shiite-majority Iran have already sold out, but the film has triggered controversy in the Sunni world.

No announcement has yet been made on when the two other parts of the “Muhammad” trilogy, covering the rest of his life, will be produced.