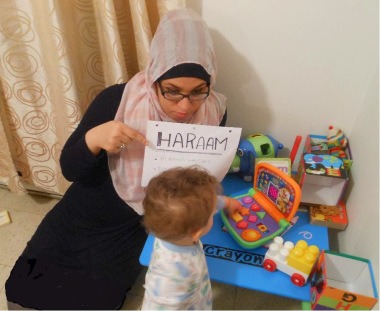 “Everything is Haraam” Parenting

Parents have asked my opinion about Islamic schools and my answer is always this : don’t expect it to raise your children  for you. Although Islamic schools are generally a good environment, they don’t create miracles.

A little background on myself : I started wearing hijab when I was in kindergarden and attended Islamic school until grade 7. I was pretty much the “model student” whom everyone assumed was perfect and innocent. Reality check : I was that kid who would  lie to your face about making “wudu” and would pretend to pray while actually reading comic books in my room.

One thing I remember vividly from  Islamic school is how effortlessly the word “haraam” (forbidden) was tossed around right, left and center.

Haraam is a big word. In fact, it is such a serious deal that claiming something is haraam when it isn’t, is in fact haraam in itself. Yet, we have no problem using it on the same basis that we say “No”.

I have personally suffered from this… Since I grew up believing that mostly everything around me was, not only off limits, but basically on the same level as apostasy, I threw it all out of the window. After I left Islamic school in grade 8. it only took  one year for me to go from being the model hijabi to….well, I won’t go in the details. Let’s just say, I lost my “haraam police” badge at that point. The truth is, I wasn’t raised with  love and understanding of Islam. I didn’t learn enough about the nuances, the wisdom and the reasoning found in therein. Everything was presented to me as black and white, do or die. It kind of messes with your head when you’re under the impression that eating pepperoni is on the same level as murdering someone. You stop taking things seriously.

I know what you’re thinking: “But sister, there are different levels of haraam. We all know murder is not equal to eating bacon…”   Sure, as adults we know that. But as a kid who went through it, trust me that all I heard was, “No, no, no. Bad, bad, bad. Sin, sin, sin. Hell, Hell, Hell. No explanations, it just IS.”

I feel that “haraam” is often used as a lazy, backhanded scare tactic more than anything else, when really it should be a last resort. After all, it’s so much easier to just yell “haraam” than to have a 15 minute conversation with your son about the negative social repercussions of pornography.

My goal is to raise my children with critical minds and have them use their intellect to understand what right and wrong means. Why is eating pork bad for your health? Why isn’t it OK to celebrate Halloween? Why is it actually so bad to disbelieve in God? I want them to question and then understand the wisdom and reasoning behind the rules, and if they don’t get it right away, that’s OK too.

Sometimes, the answer can be just as simple as, “It’s not compatible with our Islamic values.” or “It makes God sad/mad when we do that because….”

I don’t want my children to grow up viewing the World through a “haraam lens” but rather, through a lens of positivity and opportunity. After all, everything is halal (permissible) until proven otherwise, not the other way around. Why are we, as a community, so eager to pronounce things as forbidden?

I don’t believe in the “everything is haraam” parenting method on the simple premise that it doesn’t work. I have lost count of the number of youth I have seen go completely off the tracks when they grew up and left the nest. When you impose harsh and seemingly unrealistic boundaries on a youth, it’s only a matter of time before they rebel and throw everything they “learned” away.

After my period of rebellion, I fell in love with Islam again when I realized how it’s a wholesome lifestyle, and not just a shallow list of right and wrongs. Eventually, learning about the differences of opinion in Islamic jurisprudence made me realize how very little things in this life are black and white, and how risky it really is to brand things as “haraam” in the first place.

This is the kind of wholesome Islam I want to raise my children with. Eventually, I hope  they gain a level of Islamic knowledge to be confident in their decisions, and not have to be in constant fear of engaging in sin. I also want them to be familiar with the concept of scholarly difference of opinion. That way, they’ll be able to understand why Ahmed from Saturday school eats McDonald’s, and we don’t.

In conclusion, I hope I didn’t scare any parents away from enrolling their children in Islamic schools. Going to Islamic school gave me a foundation to fall back on, but the REAL foundation is at home. No one can raise your child for you. If you want your child to grow up with a wholesome understanding of their faith, you’ve got work to do.