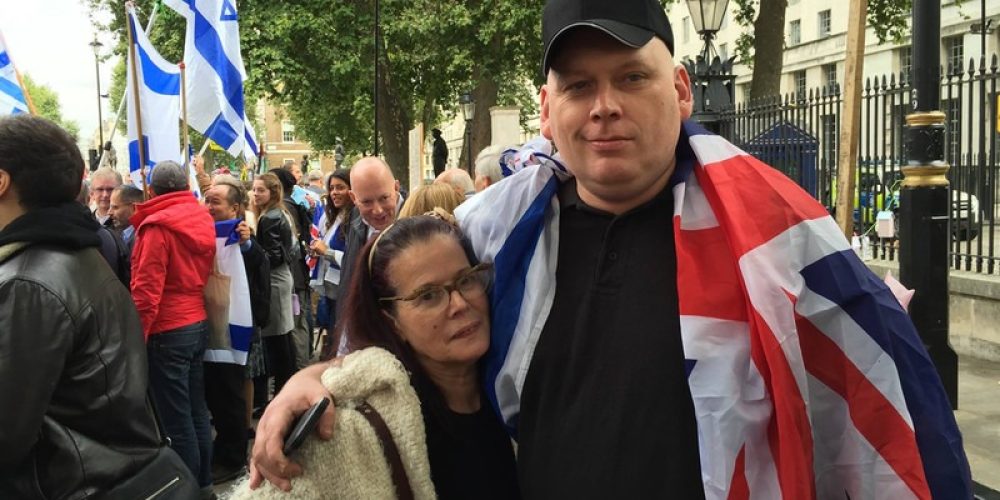 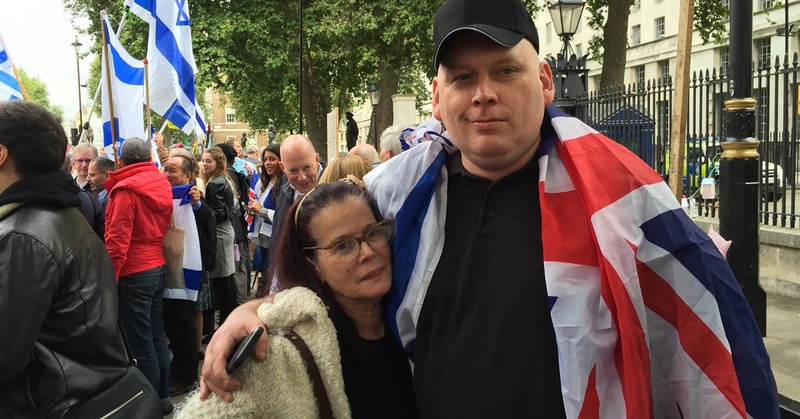 An investigation by The Electronic Intifada has unveiled new links between far-right anti-Muslim group Britain First and the pro-Israel movement.

The cultural and political conference was organized by the Palestine solidarty group Friends of Al-Aqsa, which said the event attracted more than 15,000 people.

Besser, who is described by Britain First as its “intelligence officer,” stood near the entrance to the Queen Elizabeth II conference hall taking photos of people entering.

Video of the picket shows Besser threatening to assault an attendee. Besser shouted to police, “There’s going to be a breach of the peace here … I’m going to hit him in a minute.”

Israel lobby groups had attempted to have Palestine Expo shut down by the government, on spurious “anti-terror” grounds.

Friends of Al-Aqsa chair Ismail Patel told The Electronic Intifada that it was only at the last minute, after his group had promised a court challenge of any government decision cancelling the event, that communities minister Sajid Javid backed down.

Patel said that it was of concern that a member of an extremist group had apparently been monitoring the event: “It worries us.”

Patel said his group took extra security measures due to the picket, and that three people were removed for threatening to cause a disruption.

No record of police employment

Besser works as a security guard, and runs a small business, London Security Patrol. On his social media he says he is a Security Industry Authority trainer – the government’s regulator for private security guards.

A listing for his company also claims that Besser previously worked for London’s Metropolitan Police.

“We would not employ anyone whose known activities may contradict the duty to promote race equality,” a spokesperson for the Metropolitan Police told The Electronic Intifada, citing the ban on police officers joining the British National Party. The spokesperson said that the force’s ban on the BNP covers Britain First, since it was founded as a BNP “splinter.”

She said this vetting is also applied to external contractors and trainers, and that there was no known record of a former or current Metropolitan Police employee or contractor named Paul Besser.

A spokesperson for the Security Industry Authority said: “We are not responsible for registering trainers” but could revoke licenses to train security guards. The spokesperson said the body could not comment on whether Besser was currently SIA licensed.

Neither Britain First nor Paul Besser answered requests for comment. But the group’s own videos and photos confirm Besser’s involvement.

On its Facebook page, Britain First in 2015 described Besser as its “commanding officer for London.” According to the Exposing Britain First blog, the group’s leader describes Besser internally as its “intelligence officer.”

Besser encourages volunteers to use an online “disguise” to gather “intelligence” from “behind enemy lines” and signs messages “OCS” – short for Onward Christian Soldiers.

Britain First is also a registered political party, whose aims include a ban on Islam. It was founded in 2011 by former British National Party activists.

In a BBC documentary in 2015, leader Paul Golding warned of “bloodshed” and “civil war” against Muslims.

One Labour lawmaker has called for Britain First to be banned, after fellow MP Jo Cox was murdered by neo-Nazi Thomas Mair last year.

Multiple witnesses said that Mair had shouted “Britain first” as he shot and stabbed Cox to death. But police described Mair as a loner and said there was no evidence he had been a member of any political groups. Britain First denied any involvement.

Although Britain First is thought to have only a small number of active members, and its performance at the ballot box has been dismal, its Facebook page now has 1.9 million “likes.”

This gives it a large platform to spread its often factually questionable and stridently anti-Muslim message.

Britain First videos – some racking up millions of views – often revolve around violent anti-Muslim provocations, such as the group’s “Christian patrols,” “invasions” of mosques and Halal slaughterhouses.

Some of these antics have landed members in legal trouble. In December, Golding was ordered jailed for eight weeks after he violated a court order by leading an “invasion” of a Cardiff mosque.

In an angry YouTube video published soon after his release, Golding threatened a “day of reckoning” against politicians, journalists and the rest of the “corrupt left-wing establishment.”

“Every lie, every act of treachery will be revisited on you tenfold,” he said.

Over dramatic music, and photos of political figures including Prime Minister Theresa May, Labour leader Jeremy Corbyn and former London mayor Ken Livingstone, Golding promised “leftists” they would meet their “miserable end at the hands of the Britain First movement.” He spoke of his “hatred for traitors,” and promised an “unceasing war against the establishment.”

The video evokes the words of Thomas Mair, who had used his first court appearance after his arrest to proclaim“death to traitors.” Mair hated politicians like Cox who showed compassion for refugees.

When Sadiq Khan was elected London’s first Muslim mayor the previous May, Britain First threatened the Labour politician with “direct action” and said it “considers all Muslim elected officials as ‘occupiers’ ” and would “not stop until all Islamist occupiers are driven out of politics completely.”

In November, deputy leader Jayda Fransen was fined $2,500 for religiously aggravated harassment of a Muslim woman.

Paul Besser himself is listed as an instructor at a knife “defense” program founded by a former army officer.

Britain First videos show that Besser was involved in at least two demonstrations against East London Mosque during London’s mayoral election campaign. In one video, he can be seen filming counter-protesters who were protecting the mosque.

On both occasions, Besser and his fellow far-right activists were chased off by local people.

A video posted online by the Israel Advocacy Movement shows Besser taking part in an attempt to prevent a Palestine solidarity demonstration from marching through London in June.

The posting does not name Besser or his role, designating him only a “Britain First Jewish activist.”

The group has cited Besser “who is himself Jewish” as a defence against rumours they had been involved in a planned anti-Jewish demonstration in North London, called for by neo-Nazi elements.

This attempt to reach out to pro-Israel groups on narrowly anti-Muslim grounds is a similar strategy to other far-right groups in recent years.

Internationally, the alliance between Zionist and white supremacist groups has been growing. Steve Bannon, former senior adviser to US President Donald Trump, who is close to the “alt-right,” is set to speak at the Zionist Organization of America’s annual gala in November.

The English Defence League supposedly had a “Jewish division” at one stage. Its leader, Roberta Moore, left to found the tiny Jewish Defence League UK – named after the violent anti-Palestinian racist group founded in New York.

Moore was once photographed protesting with former vice chair of the Zionist Federation Jonathan Hoffman, at a counter-picket in support of an Israeli cosmetics shop in London some years ago.

Hoffman was also present alongside Besser at the picket against Palestine Expo. Hoffman declined to answer questions for this article. It is unclear whether he was aware of Besser’s Britain First links at the time. Earlier, Hoffman had denied Besser’s links to Britain First.

Hoffman regularly appears at Palestine-related events in London, where he makes a habit of heckling, shouting abuse and attempting to disrupt meetings.