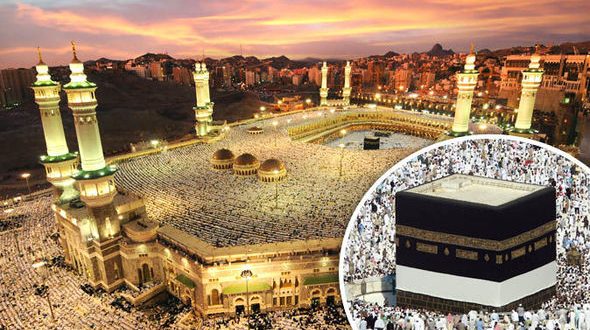 Hajj: A Journey of Love

‘And proclaim the Hajj to all the people: they will come to you on foot and on lean camels, coming from distant places’ (22:27)

That blessed season has returned once more. The tablecloth of glory begins to open, just as the lunar year comes to a close. The Divine call of Abraham once heard only by deserted mountains, draws millions to that same barren valley thousands of years later.

Whether or not we are performing the pilgrimage this year, let us ponder upon some of the lessons that we aught to learn from the Hajj.

1. The circumambulation of the blessed Ka`bah is a reminder that one’s entire being is to revolve around Allāh. Today’s world is one in which man’s lower self is given the status of Lordship.

It is man’s whims that are considered sacred. The message of the Hajj is of absolute opposition to the culture of Kufr that dominates our time.

2. The running between the mountains of Şafā and Marwah is a reminder of Hājar’s desperate quest for water to quench the thirst of her infant. No earthly being stood witness to this most instinctive motherly act of sacrifice except the silent mountains. However this very act of motherly love pleased the Lord to such a degree that He ordered mankind to run in the footsteps of that blessed lady until the Day of Judgement. Where are the liars who claim to honour women by stripping them of their femininity, to witness the glory that Islām awards a lonely lady… for simply being a mother?!

3. The prayer behind the Station of Abraham – in which his footprints are enshrined – is a reminder of the necessity of Leadership. After completing the circumambulation of the Blessed House, the pilgrim is ordered to perform two units of prayer, positioning himself behind the footprints of Abraham.

Why cannot one pray in any location he desires, so long as he faces the Ka`bah? By positioning the footprints of Abraham, who was appointed as an Imām for mankind (Qur’ān 2:124), between himself and the House of his Lord, the pilgrim is reminded that the only way to reach his Lord – which is the purpose of his creation – is by following those whom the Lord has vested with the authority of leading mankind. No era is empty of a Divinely chosen leader, accessible for the Ummah to follow. It is incumbent upon us to find ours and follow him.

4. The heavenly breath of Abraham stirs hearts from the furthest points of the globe, transcending colour, tongue and geographical boundaries. Male and female, young and old, black, white and a thousand shades in between; all stand shoulder to shoulder, facing a single direction, performing the very same rituals, in servitude to a single God.

‘Indeed this community of yours is one community, and I am your Lord. So worship Me’ (21:92)

Imagine if all those who made the pilgrimage heard the same message and returned to their lands with a clear vision as to the goals that need to be realised. Imagine if the pilgrims of the House took this unique opportunity to interact with their brothers and sisters from other parts of the world and become aware of their affairs, sharing their challenges and assuring one another that we are all a single unified hand against the enemies of Allāh.

But alas! The Istikbār [1] has succeeded to a great extent to ensure that no such phenomenon comes into being. With the installation of hypocrite regimes in the lands of revelation, the only message that pilgrims hear during the magnificent Hajj is that the worship of the dead is a grave sin and invoking them at their graves is a heresy and that considering them partners to the Almighty amounts to disbelief: matters that are of no relevance to the Ummah’s condition whatsoever and do absolutely nothing to help us move forward.

But by the grace of Allāh, the voice of guidance is always present, no matter how hard some strive to silence it.

‘They desire to put out the light of Allah with their mouths, but Allah will perfect His light though the faithless should be averse’ (61:8)

If the insolent traitors, who flaunt their being the guardians of the blessed sanctuaries, succeed in blocking the light of Allāh from reaching the ears and hearts of the Hujjāj at the House and the Sanctuary of the Beloved, the voice of truth echoes loud and clear from a different direction. Every year, Imām Sayyid `Alī Khāmene’ī issues a message during the days of Hajj, drawing the attention of the Hujjāj to issues that are actually relevant to the Ummah today.

One of the points that his Eminence continuously emphasises is the necessity of Muslims to be united, irrespective of ethnicity, colour and even school of thought. As such, we are encouraged to pray with our Sunni brothers and sisters, especially while in the two holy cities. This is the very echo of the Qur’ān’s call to unity. In a world in which the enemy’s greatest weapon against us is our being disunited, anyone who serves that agenda has aligned himself with the forces of the Shaitān and exited the guardianship of Allāh, the Exalted.

5. After completing the rituals of the `Umrah in Makkah, the pilgrim leaves the sanctuary of his Lord to begin the rites of Hajj at the furthest point from the Haram. The Wuqūf [2] in the desert land known as `Arafāt is the first rite of the Hajj. Step by step, the pilgrim is brought closer to the sanctuary of the Lord once more: from `Arafāt to Muzdalifah [3] and from Muzdalifah to Minā [4], after which he may once more enter the blessed sanctuary. This journey reflects the journey of man through existence: he begins in a state of closeness to his Lord, is distanced to the lowest and most distant of realms (‘Dunyā’ literally means ‘that which is low’), then slowly brought back to the Divine presence once more.

However, this is in no terms a futile journey. For it is in the darkness of woldly oceans that man collects pearls to store in the cave of his heart, ready to present them on the Day of Meeting. It is in the desert of `Arafāt that man gains Al-Ma`rifah – inward knowledge and consciousness – which is that very treasure that elevates him to the Station of Divine Khilāfah [5].

‘One who knows himself, knows his Lord’
(Related from the Prophet Muhammad (ص))

It is for this very Ma`rifah that man was created. As such, while the Dunyā is indeed the Lowest Realm, it is also of paramount importance. For it is in this realm alone that man can realise the purpose of his existence. In the worlds to follow he simply reaps that which he has sown during his time on earth.

The Dunyā is our `Arafāt. It is in the desert of distance from Divine proximity that – by following the Unlettered Prophet – we are to discover who we truly are. And if we do such, we have achieved our purpose on this earthly plain and this very ‘Dunyā’ has become a means of Taqarrub [6] to the Mighty and Exalted.

The Wuqūf in the Land of `Arafāt also constitutes the most important element of the Hajj, to the extent that it has been related that the Beloved of Allāh said: ‘The Hajj is `Arafah’

6. The stoning of the three walls, representing the Shayātīn [7], is a vivid reminder of the presence of the enemy. Before man even entered the earthly sphere, his enemy was planning his destruction.

‘O Children of Adam! Do not let the Shaitān tempt you, like he expelled your parents from paradise…’ (7:27)

The three Jamarāt [8] possibly represent the three enemies of man, the greatest being his very own lower self, the second being the Shayātīn from among the Jinn and the final being the Shayātīn from among mankind. One of the greatest tools in the hands of the enemy is Al-Ghaflah (negligence), a slumber like state in which man is made heedless of the enemy’s very existence. The Qur’ān continuously demands that we be from those who remember the reality of matters. It is only the light of remembrance (Adh-Dhikr) that can save man from the darkness of heedlessness (Al-Ghaflah).

7. The sacrificing of the animal on the Day of Eid is a replication of Abraham’s willingness to sacrifice that which he held most dear, in the love of God. Allāh, the Exalted, had no need for Ishmael’s blood. Rather it was Abraham’s elevation through this Divine test that was desired: his uncompromised submission and absolute servitude to the Only One Worthy of Worship is what we remember on the occasion of Eid Al-Aďhā.

Abraham is, as the Qur’ān states, a role model for us to follow:

What will we sacrifice to show our love for Him?

There is nothing more dear to man than his very own being. And this is the very Ishmael that he must sacrifice in his Jihād for Love. The Great Mystic Teacher Āyatullāh Al-`Użmā As-Sayyid `Ali Al-Qāďi is related to have said: ‘between yourself and Paradise there is but the distance of one step: that step is your very own (lower) self’

Contemplating the various dimensions of Hajj – spiritual, physical, socio-political etc – one cannot help but marvel at the magnificent religion of Islām. Unlike other schools of thought which restrict guidance to only one aspect of man’s being, Islām seeks to guide him in his entirety. It maintains that spirituality is inseperable from political and social matters and that the path to heaven is through this very world. Just as the pilgrim is to seek his Lord in the midst of the chaos of Hajj, it is in this very world of distractions that man must find his Beloved.

‘The heart is the sanctuary of Allāh so do not place in the sanctuary of Allāh, other than Allāh’
(Related from Al-Imām Al-Sādiq (ع))
—-
Footnotes:
[1] Istikbār: Literally ‘arrogance’. The term is a reference to arrogant regimes who manifest the Satanic characteristic of rebellion before the Almighty.
[2] Wuqūf: The act of staying in the land of `Arafāt during the specified period as part of the rituals of Hajj
[3] Muzdalifah: A desert region between `Arafāt and Minā where pilgrims spend the night after completing the Wuqūf in `Arafāt
[4] Minā: A desert region adjacent to the Blessed City of Makkah
[5] Khliāfah: Vicegerency
[6] Taqarrub: Nearness
[7] Shayātīn: ‘Devils’; the plural of ‘Shaitān’
[8] Jamarāt: The three stone walls representing the three devils, at which pilgrims throw stones as part of the rites of Hajj