Honouring Sheikh Nimr: You can kill a Man, but not an ideology

An innocent man, Sheikh Al-Nimr, was executed by the brutal Saudi regime immediately after New year festivities. Sheikh Al-Nimr was a faith leader, reformist and human rights activist in Saudi Arabia, who had long campaigned for an end to the discriminatory laws against the Shia minority community of the country. Sheikh Al-Nimr never advocated violence; in fact, in an interview with the BBC in 2011, he said he was supporting:

“The roar of the word against authorities rather than weapons … the weapon of the word is stronger than bullets, because authorities will profit from a battle of weapons.”Sheikh Nimr al-Nimr

Sheikh Nimr had always been at the forefront of seeking peaceful and non-violent reform in Saudi Arabia, using legitimate means such as protests and petitions, to seek justice for the citizens of his country. 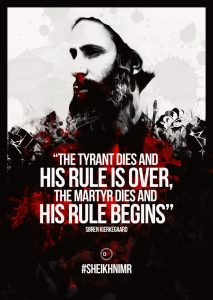 In 2012 he was shot multiple times and taken into solitary confinement, in 2013 he was sentenced to execution for “disobeying the ruler” and “leading and participating in demonstrations” in the Kingdom of Saudi Arabia, and in October 2015 the appeal against his execution was denied by the courts and King Salman agreed for the execution to go ahead. His entire trial was flawed from the moment it began, in some instances he was not present at his own trial, he did not have access to his lawyer, and many international human rights organisations, including Amnesty International expressed serious concern about the fairness of the proceedings, conducted in the country’s Specialised Criminal Court. The Specialised Criminal Court was established in 2008 to try terrorism cases but has increasingly been used by the Saudi government to silence and punish peaceful human rights activists who advocate constitutional and political change in the country. Three youth activists Mohammed Al-Sheuikh, Mohammed Al-Suwamil and Ali Saeed Al-Rebh were also executed in the first week of 2016.

The time has come for us all to realise that our silence is consent, that our silence legitimises the actions of tyrants. You do not have to practice a certain faith to condemn tyrannical leaders and regimes, you do not have to necessarily agree with the views of an individual who is at risk – you just have to be human. Many people refused to speak out against the sentencing of Sheikh Al-Nimr despite the fact that the Holy Quran specifically says:

“Oh you who believe, persistently stand out firmly for justice”(The Holy Quran 4:135)

Till today, the nephew of Sheikh Nimr, Ali Mohammed Al-nimr remains incarcerated by the Saudi regime. Ali was a child when he was arrested for partaking in pro-democracy protests. In 2015 the judiciary of Saudi Arabia confirmed that Ali and other innocent youth protesters will be executed and then crucified. It is important to note that Ali Al-Nimr, Dawoud Al-Marhoon and Abudllah Al-Zaher, three of the Shia youth awaiting execution were denied a fair trial. We call on human rights defenders to sign all existing petitions, organise/attend demonstrations, and to urge elected government representatives to use all means possible to ensure these defenseless protesters and activists in Saudi Arabia are released unconditionally.

(This article was originally featured here)