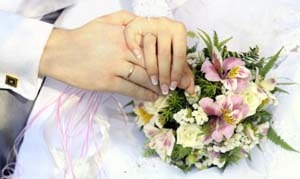 How should wedding ceremonies be conducted?

Question: We have seen and heard about many accidents that have happened during wedding ceremonies and changed them into ceremonies of sorrows. Would you please guide us as to how we can avoid such bad accidents in order to make the ceremonies of joy the best moments in the lives of spouses?

The answer: The ceremonies of marriage, especially those which take place during the night of wedding, are based on joyous traditions that leave sweet memories in man’s life. Therefore, spouses care a lot for these ceremonies. They take pictures to remain with them until the last days of their lives and to remind them of those special hours, which are different from any other hours of their life.

How nice are those moments and especially the influence left in spouses’ hearts by the words of this supplication, which is read by the marriage official in the midst of the songs of the relatives who gather around the bride and bridegroom:

Such a beautiful scene from amongst all the scenes of life deserves the best efforts and cooperation of relatives so that these ceremonies are carried out with joy and delight in the best way. However, unfortunately, in some of these weddings, quarrels take place by some irresponsible persons that do away with the joy of the young spouses who will not experience this occasion again with the same pleasure.

Such quarrels take place due to ignorance, bad education, whims, drunkenness, mixing of sexes which provokes lusts, and making passes on others that leads to disputes and suspicions, and consequently many troubles are caused.

Blessings and happiness do not come to marriages that begin with unlawful acts or encourage opportunities to commit unlawful acts. Handicaps in newborn children and disagreements that lead to divorce or griefs and distresses are the results of such unlawful actions during weddings. Exciting songs, transparent clothes that display women’s charms, bare faces with flagrant makeup before non-mahram men…all of these will extinguish the marital happiness sooner or later. Let people not think that it is harmless to celebrate the joys of a night or two in one year! Everything has its enduring effects, and how often it is that a simple matter troubles the situation and frustrates a marriage whereas its beginning was simple and trivial.

Hence, since religion and its moral teachings are very important, we continuously insist on and invite all classes of society to revive themselves in a modern and attractive way and in a language that is understandable by the youth.

Besides all that, the wedding ceremonies should be carried out accurately. Supplications and charity to the poor should not be ignored because they ward off misfortunes.