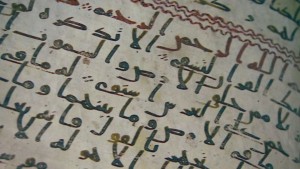 Part of the seventh-century Quran manuscript held by the University of Birmingham.

In recent weeks, the Times ran two stories referencing the Qur’an that caught people’s attention. The first was an expose on ISIS and slavery, which initially ran with the headline “Koran encourages rape.” The second was its reporting on the discovery and dating of the Qur’an fragment at the university of Birmingham, which was entitled “Koran discovery could rewrite Islamic history.” Together, these two articles say a lot about a pattern of reporting about Islam that is prevalent in today’s media; driven by motives of profit, controversy is preferred over serious scholarship.

The first story, originally published in the New York Times under the equally controversial title “A Theology of Rape”, takes ISIS’ perverse interpretations of Islamic law at face value and attempts to find a basis for them in the Qur’an and classical legal tradition. Despite countless Muslim scholars condemning ISIS as un-Islamic (see here for example), little to no space in the article is given to rebutting their erroneous reading of the Qur’an.

The second story, this time originating in the Times itself, discusses the carbon dating of the Qur’an fragments recently discovered in the library of the University of Birmingham. Championing the views of revisionist historians such as Tom Holland, the article says that these fragments of the Qur’an might pre-date the Prophet Muhammad himself and ‘could rewrite the early history of Islam.’ Again, little space is given to more mainstream experts to voice their opinions.

These are far from the only articles in the mainstream press to misrepresent Islam or to use sensationalist language but what sets them apart is their utter disregard for the most basic accuracy in their representation of the debate. For example, in the case of the Qur’an manuscripts, the carbon dating most likely reflects the age of the parchment and not the ink, which tells us nothing about when the text was actually written. In fact, as Professor Brown points out, far from rewriting early Islamic history, these parchments more likely confirm its broad strokes. So why does the Times run with such a melodramatic headline? And why do these stories spread so quickly across the web?

There is a very simple reason for this: clickbait. In his seminal, Manufacturing Consent, Noam Chomsky describes a number of “filters” that news must pass through before it reaches us, the audience. One filter is commerciality; media corporations are profit-making ventures. In various ways, they rely on reader/viewer traffic to make money. The fact that these two headlines are (a) dramatic and (b) tapping into the current antipathy towards Islam and Muslims guarantees they will attract readers (even Muslims who will click on these articles to see what they are saying).

This “free-market” dynamic drives the media’s coverage of not just Islam but international and domestic affairs; just look at the about-turn of Britain’s right-wing press when confronted with refugee children drowning and washing up on Europe’s shores. Is there any doubt they abandoned their anti-refugee rhetoric for a more sympathetic tone because criticising dead children is bad for sales?

To counter this phenomenon, it is essential that we educate ourselves and are able to provide thoughtful and articulate responses to these market-driven media attacks. Moreover, at a time when it is possible to start your own media outlet on the shoestring (remember that the Huffington Post started as a blog!), we must continue to develop our own independent media to compete with the corporate mainstream.