I Learned From Husain… 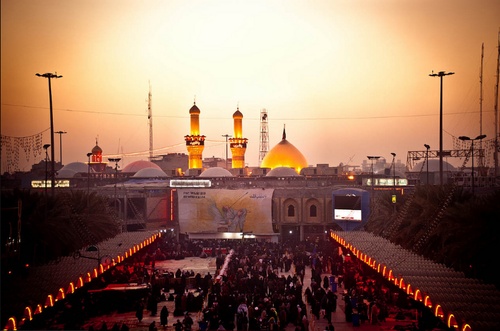 Once upon a time a man by the name of Ghandi testified that, “I learned from Husain how to be oppressed and gain victory.”

To that I add…I learned from Husain that dying with dignity in support of your divine principles and truthful beliefs is much better than living with shame and submitting to the pressures of society and symbols of evil.

I learned from Husain how to offer the eternal and ultimate sacrifice in submission to the Almighty God with utmost patience and determination.

I learned from Husain that self-reform and purification of the Nafs is the end-goal behind the message of Islam and mission of the Holy Prophet (SA).

I learned from Husain that performing Salah sincerely to the Almighty Creator is the origin and essence of the Deen for which Imam Husain (AS) fought to establish and maintain its sanctity and it is accepted only after recognizing and supporting the divinely appointed Imam of our time.

I learned from Husain that so long as we recognize that Allah (SWT) is with us and witnessing all the injustice and oppression that we go through, that is all that matters and the pain and suffering is relieved.

I learned from Zainab how to have steadfast patience and perseverance after witnessing and experiencing the peak of oppression while supporting the oppressed wholeheartedly such that the message and legacy and dignity of the oppressed is preserved and remembered till the end of time.

I learned from Abul Fadhl Al Abbas how to become a true brother who sacrifices with love and unlimited respect and submission to our Master and Imam and to exert all our efforts to provide and protect our dependents till our last limb is severed.

I learned from Muslim ibn Aqeel when he refused to assassinate Ibn Ziyad though he had the opportunity to do so that loyalty and faithfulness are the desired attributes of a true believer.

I learned from Ali Akbar that if we stand in the position of truth and Haqq, it doesn’t matter whether we fall in the path of death or death meets us on our way.

I learned from Qasem that death in the way of Allah (SWT) is sweeter than honey and that it is even sweeter when martyrdom is achieved at a young age.

I learned from Ali Asghar that the animosity against Imam Husain reached such a high level that even the hearts did not soften and the most despicable of them killed an infant son in the arms of his father, and that the sacrifice of Imam Husain was accepted by Allah (SWT) as not a drop of blood fell down when he threw it up.

I learned from Al-Hurr how to make true Tawba (repentance) and rid myself of the inner desires of this world and instead choose eternal happiness of the Hereafter by making the most valuable decision of supporting and defending the divinely appointed Imam.

I learned from Muslim ibn Ausaja that the most valuable Wasiya that we can make to our family and friends is to urge them to serve Imam Husain and give up one’s life in his support till the last breathe.

I learned from Habib ibn Mazahir how to be a true friend and stand up with that beloved person at the time that he most needs it as Habib left everything behind including his own family to present himself before his master Husain despite his old age.

I learned from A’bes how to love Husain insanely and openly without paying attention to the opinions and criticism of others.

I learned from Joan how to earn spiritual proximity to Imam Husain and elevate in high divine ranks regardless of race, color, or looks.

I learned from the righteous companions of Imam Husain (AS) that the best type of companionship and the best of martyrs are those who support, fight, defend, and give up one’s life and blood in obedience, love, and submission to Abi Abdillah (AS).

I learned from Sakina the extent of love and sacrifice that the purified AhlulBayt (AS) have for their followers and devotees, when her father advised her to sacrifice the sip of water for the forgiveness and intercession of their Shia.

I learned from Ruqayyah that intense love and grief and separation from the most beloved may cost you your life in a split-second.

I learned from Imam As-Sajjad that the grief of Ashura does not end with the end of the tragedy and the sorrow of Karbala will forever bring tears to the eyes till the soul departs the body.

I learned from Umm Layla that the prayer of a pious mother for her child is accepted even in the most difficult of situations.

I learned from Umm Rabab that exercising Muwasaat to her husband and the Imam of her time is accepted and highly recommended, as she refused to stay under the shade of sun after witnessing the body of Imam Husain being exposed under the heat of the sun for 3 days without burial.

I learned from Dhul-Jannah, the horse of Imam Husain (AS), that serving a pious master is a pleasure which equates all of life and without that service, life is not worth it.

I learned from the Shia and devotees of Imam Husain (AS) that despite the passage of centuries from the event of Ashura, the killing of Husain has left an unhealed wound and intense fire in the hearts of the believers that will never ever die or cool down.

I learned from the tragedy of Karbala so many lessons, morals, and pearls of wisdom that no pen can write, no tongue can count, and no mind can encompass.