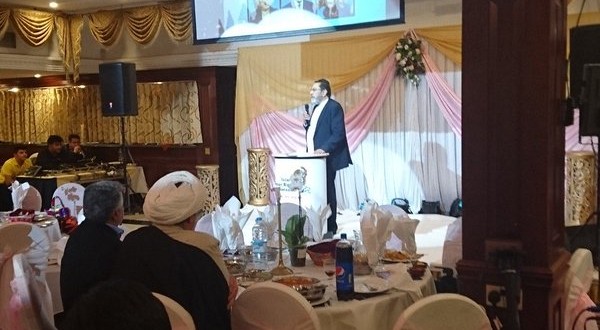 Islamophobia Award given to David Cameron and Donald Trump

The Prime Minister David Cameron has been voted Islamophobe of the Year at the annual Islamophobia Awards ceremony organised by the Islamic Human Rights Commission (IHRC).

Cameron was chosen by public vote and the prize was awarded to him at a gala dinner in London last night. However, the Prime Minister didn’t turn up to receive it.

The awards aim to subvert Islamophobia through comedy while simultaneously addressing a serious and significant issue in a creative manner.

Cameron won the award after he announced a £20m fund in January to teach Muslim women in the UK to speak English in order to “tackle segregation” and help them “resist the lure of extremism.” The scheme was widely pilloried within the Muslim community for picking on a small minority of women who have no link to extremism whatsoever.

The IHRC’s Massoud Shadjareh told 5Pillars: “Politicians should be challenging Islamophobia instread of going with the flow or paying lip service to it.”

The overall Islamophobe of the Year was won by U.S. Republican Party Presidential frontrunner Donald Trump who has called for Muslims to be banned from the United States.

“It is bad enough that anyone can come out with such arrogant, unapologetic bigotry and hate speech but I think what is really frightening is that Donald Trump is supported by such a large number of voters in what is the most powerful nation in the world” Shadjareh said.

The International Award went to the racist, Islamophobic French magazine Charlie Hebdo after it published a sickening cartoon which depicted the drowned Syrian toddler, Aylan Kurdi, growing up to become a sexual abuser.

Sky News’s Kay Burley won the media award for an interview with CAGE’s Cerie Bullivant during which she abruptly dismissed the suggestion that what she was saying was both racist and Islamophobic.

The U.S. TV series Homeland won the film award for its depiction of Muslims as terrorists.

And right-wing commentator Douglas Murray was awarded a special “Blue Peter” badge for trying so hard to get an Islamophobia award but always failing. Massoud Shadjareh said he felt “sorry for him” and wanted to “reward him for his efforts.”

Meanwhile, some positive awards were handed out to recognise efforts to combat Islamophobia.

Channel 4’s Jon Snow was given an award for broadcasting the truth about what is happening in Gaza. The National Union of Students’ Black Students’ Campaign won an award for opposing the government’s PREVENTcounter terrorism strategy. And Women in Exile won an award for helping refugees in Germany.