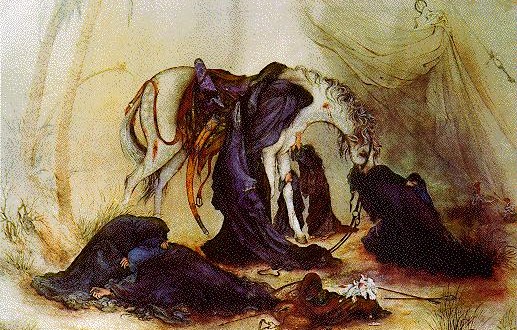 After the tragedy of Karbala, Imam Zainul Abideen (peace be upon him) was often asked what the most difficult and painful experience of Karbala was. One would assume that after witnessing more than 70 friends and family members being martyred, his uncle Abbas’s both arms being severed, his father’s head being decapitated, and his six-month-old baby brother’s neck being pierced by a three-prong arrow, that Imam Hussain’s son would surely find these unspeakable and barbaric acts of the enemies of Islam as the most painful. However, we see that our Imam always replied to those who asked with the same statement, “Ash-Sham, Ash-Sham, Ash-Sham…”

Every Muharram, we cry and lament the tragedies of Karbala in order to keep the story of Imam Hussain alive, to learn the principles of justice and sacrifice, to become better believers, and to not be among the oppressors. Yet we see Muharram after Muharram that our Hijab as Muslim women is no different to what it was before Muharram.

At times, one may think that the so-called followers and supporters of Lady Fatima and Lady Zainab (peace be upon them) are committing oppression towards them. Oppression is to do injustice. These women gave their entire families for the sake of this religion. And for most of us, we don’t even have the courtesy of valuing that. Lady Fatima’s family was killed so that we today have true Islam in our grasp. Do we not care at all about Lady Fatima’s family being destroyed?

According to some narrations, Lady Fatima is present wherever the tragedy of her son is mentioned. In order to do justice to Lady Fatima and the holy women of Karbala, and if we wish to make them proud this Muharram season, let us consider the following points.

These otherwise magnificent sisters for one reason or another have not been observing Hijab even though it becomes obligatory upon girls at eight and a half years of age. Some have courageously tried to observe Hijab yet did not succeed, while others plan on insha’Allah concealing their beauty one day, just not today. Amazingly though, all that is needed is a small initiative to move towards the right direction, and subhan’Allah, Hijab will be easy! Allah says in a Hadith Qudsi, “When a believer takes one step towards me, I take ten towards him. When a believer walks towards me, I come running.”

In the cities of Kufa and Damascus, the holy women of the Prophet’s household (peace be upon them) were paraded around without their veils, with their sacred beauty visible to unrelated strange men to gawk at. Their hair was visible, they had been looted of their jewels from their ears and hands, their necks were shown, they were chained up as though they were prisoners of a heinous crime, and they were pushed around and dealt with by the men of Yazid ibn Muawiya. These are the women who were the pearls of Prophet Muhammad…who had been kept safe and always protected.

If today we claim to lament and grieve the suffering of these women, surely it behooves us to not insult their memory and observe the Hijab that they were so mercilessly deprived of. Indeed, that is the least we can do to express our sympathy and prove how real our tears are.

To the Part-Time Hijabi

This group of sisters is great at doing what they do best, and that is Hijab. In fact, some of these sisters have such great Hijab talent that when they practice Hijab, they make the full-time Hijabis look like amateurs. However, there’s only area in which these sisters seem to falter. At times we see them covered at a dinner party at the Shaikh’s house, and other times, we can’t recognize them if we ever happen to run into them at the shopping center. Some days these sisters understand the beauty of covering up, how doing so demands self-respect, and that we as Hijabi women do not let strange unrelated men take a bite out of our beauty, in addition to the fact that we do not wish to break Allah’s laws. But on the other hand, these sisters are capable of waking up one morning completely hating the Hijab. It’s as though somebody killed the “Hijab is my right to protection” angel within her.

These sisters should be saluted for at the very least observing Hijab on the days they do. But we sincerely do encourage such sisters to consider becoming full-time Hijabis. Why? Because it has been narrated that Allah loves his creatures 70 times more than a mother is ever capable to love her child. If doing it for the rewards or saving one’s self from facing punishment in this life and the next doesn’t entice the part-time Hijabis, then perhaps realizing that in addition to saluting the women who sacrificed their Hijab in Karbala to keep true Islam alive, we will be pleasing the One who loves and cares for us more than anyone else, Allah!

This group of believing women, who are almost on track when it comes to Hijab modesty, have the hardest part mastered, and that’s the head scarf. However, observing Hijab does not end there. We too must learn how to improve our Hijab in every way, every Muharram. Here are the most common “problem areas” which Hijabis usually don’t know about, forget, or need reminding in order to help perfect our Hijab.

Fully Covered clothes: Sometimes a perfect Hijabi may unintentionally falter in her Hijab by wearing clothing items that are “in fashion”. Short sleeved tops, large necklines, three-quarter harem pants, long shorts which visibly reveal those parts of our skin which need to be covered, etc. are a no-go zone. Besides the fact that wearing such clothes isn’t exactly too Halal, if prayer time sets in, then the only way these sisters’ prayers will be accepted is if their clothes magically grow in length.

Wrists: Many of us don’t understand what the big deal is with covering our wrists, as “it is pretty much a part of the hand.” Interestingly enough, in Japanese culture, female entertainers known as Geishas intentionally uncover their wrists in front of men as a method of enticing them. Most Islamic stores actually sell “sleeves”, which are great to wear under tops as they are an easy-to-use item which instantly improves our Hijab. Keeping in mind how the holy women of Karbala had their wrists chained and handcuffed will surely help us cover our wrists, insha’Allah.

Feet: According to the majority of scholars, the feet are also a part of our Hijab and need to be covered in front of non-Mahrams. The most convenient thing to do is to wear natural skin-colored socks (which are not transparent) while wearing flats and sandals. For those sisters who like to wear toe-divider sandals, most Hijab stores usually sell toe-divider socks which are almost always available in natural colors. Remembering how Imam Hussain’s women were forced to walk on the hot sands of the deserts of Iraq will give us strength to cover our feet, insha’Allah.

Loose-Fitting Clothes: Tights, skinny-leg jeans, chest-shape revealing tops, and hip-sucking skirts are the clothing items that make up most of our wardrobes. The best way to dress in public is by wearing those clothes in which prayer would be acceptable. And if one ever has doubt as to what is classified as too tight or just right, just ask either your father, brother, husband, or son what looks tighter, and they will surely provide you with a reliable opinion.

Shocking Colors and Makeup: Unfortunately, the idea that Hijab intends to not attract attention to ourselves is misinterpreted by some of us. While covering up our body is one part of Hijab, another part is to not make ourselves so completely attractive and head-turning. Ideally, most of us can do this by not wearing shocking colors and Hijabs in addition to not painting our faces in all seven colors of the rainbow. Remembering how Imam Hussain began to miraculously recite verses of the Qur’an on top of the spear in the marketplace of Kufa in order to distract the people from looking at the ladies will surely help underscore this point.

Transparent Clothing and Hijab: At times in the warmer weather, we find it more convenient to wear cardigans made of light material and summer-friendly colors. It is one thing to wear fully-covering, loose, and neutral-colored clothes but what isn’t too smart is wearing such Hijabi outfits if it’s all see-through. If one can understand the reason why people don’t hide their treasures in clear transparent containers, then surely wearing non-see-through Hijab outfits will make sense, insha’Allah.

And if all else fails, let us think of how Imam Hussain’s five year old daughter Bibi Sakina was frantically crying her heart out, kicking, and screaming to escape from those cruel men who violently stripped her of her Hijab and even her earrings from her tiny ears. No doubt her story has proved to be so powerful that it even has the potential to make non-Muslim women want to cover. Insha’Allah it won’t be too long before all believing women will be honored to make Bibi Fatima and Bibi Zainab proud and truly value, respect, and properly practice the Hijab in order to raise our status in the eyes of Allah and the Ahlul Bayt not only in these holy days but every day of our lives.