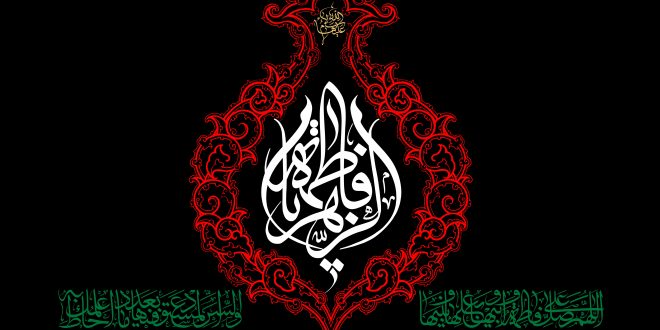 The Mother of her Father

History not only always speaks of the `great ones’, it only attends to them. Children are always forgotten. Fatima is the youngest child in the family. Her childhood passes in a storm. Her birth date is debated. Tabari, ibn Ishaq and Sirah ibn Hashim mention five years before the Prophet’s mission. Morravej al Zahib Masoudi mentions the opposite, five years after the Prophet’s mission. Yaqubi takes the middle, but not exactly, by recording, `after the revelation’. Thus, there is a difference of opinion among the recorders of the Traditions. The Sunnis, then say, five years before the mandate of the Prophet and the Shiites say five years after his mission.

We leave this discussion to the scholars so they can enlighten us as to the exact date of her birth. We are con­cerned with Fatima herself and the reality of Fatima. Whether she is born before or after the mission of the Prophet does not concern us here. That which is clear is that Fatima remained in Mecca alone. Her two brothers die when they are infants and Zaynab, her oldest sister, who acts as the mother of this beloved child, goes to the home of Abi al Aas. Fatima bitterly accepts her absence. Then it is Roqiyyeh and Umm Khulthum’s turn. They marry the sons of Abu La­hab, and Fatima remains even more alone. This is if we ac­cept her birth as having been before the mission of the Pro­phet. If we accept the second, then, essentially, from ‘the time she opened her eyes, she was alone. At any rate, the beginning of her life coincides with the heavy mandate of the Prophet. It is filled with great struggles, difficulties and punishments whose shadows fall upon the house of the Prophet.

While her father bears the mandate of consciousness for mankind upon his shoulders and suffers the enmity of the enemies of the people, her mother nurses her beloved husband. With the initial experiences of childhood, Fatima tastes the suffering, sadness and anger of life. Because she is very young, she can move about freely. She makes use of this freedom to accompany her father. She knows her father has no life of his own to be able to take hold of his child’s hand and walk freely and easily down the streets and into the bazaar. He always goes alone. In the wave of the town’s enemies and enmity, he swims with dangers on all sides. The ‑small girl, who knows her father’s fate, never lets him go alone.

Many times she sees her father standing amidst a crowd of people. He speaks to them softly and they, in turn, harshly send him away. Their only answers are to make fun of him and show him enmity. He feels lonely and friendless again: But quietly and patiently, he gathers, another group together. He begins his speech all over again. At the end, tired and having brought forth no result, like fathers of other children who return home from their jobs, he also returns home seeking a bit of rest and then returns once more to his work.

History reminds us that once when he had gone into the Masjid al haram, and is called bad names and is beaten, Fatima, a small child, is standing alone a short distance from the scene. She watches and then returns home with her father.

The day when he has prostrated himself in the mosque and his enemies throw the intestines of a sheep at him, suddenly, little Fatima, reaches towards her fa­ther, picks it up and throws it away. Then with her small, loving hands, cleans her father’s head and face, comforts him and returns him to their home .

People who see this thin, weak girl, alone, beside her champion father, see how she comforts him. She sup­ports him through his troubles and sufferings. With her pure, child‑like behavior, she sympathizes with him. It is because of this that she comes to be called ummi abi­ha, the mother of her father.