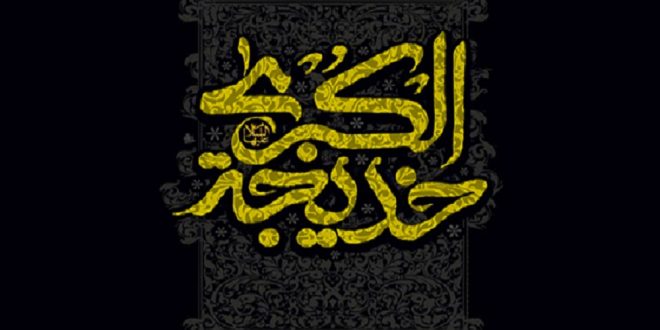 “Muslims may forget it but Islam cannot forget that in its infancy, it were Abu Talib and Khadija who protected it. They made Islam invulnerable. Abu Talib protected the sapling of Islam from the tempests of misbelief and heathenism; and Khadija irrigated it with her wealth. She did not let the sapling of Islam die from draught. In fact, she didn’t even let it wilt from neglect. Protecting Islam was, for Abu Talib and Khadija, their foremost duty. Islam was their first love, and it was a love which they passed on, as their “legacy” to their children. If they – Abu Talib and Khadija – had protected the tree of Islam from its enemies in the lifetime of Muhammad Mustafa, and had “irrigated” it with vast quantities of gold and silver, their children and their grandchildren protected it, from its enemies after his death, and irrigated it with their blood. Their blood was the most sacrosanct blood in all creation. After all, it was the blood of Muhammad Mustafa himself – the Last and the Greatest of all Messengers of Allah, and the Chief of all Apostles and Prophets.
Khadija was an “eye-witness” of the birth of Islam. She nursed it through its infancy, through its most difficult, and through its most formative years. Islam was given shape and design in her home. If any home can be called the cradle of Islam, it was her home. She “reared” Islam. If any home can be called the “axis” of Islam, it was her home; Islam revolved around her home. Her home was the “home” of Quran Majid -the Book of Allah, and the religious and political code of Islam.
It was in her home that Gabriel was bringing Revelations from Heaven for ten years.
Khadija has collected more “firsts” in the history of nascent Islam than anyone else. She was the first wife of the last messenger of Allah. She was the first Believer. She was the very first mortal to declare that the Creator was only One, and that Muhammad was His messenger. Next to her husband, she was the very first individual who heard the Voice of Revelation. She was the first person who offered prayers to Allah with her husband. Whenever he went into the presence of Allah, she was his constant companion. She was the first Mother of Believers. She was the only wife of Muhammad Mustafa who did not have to co-exist with a co-wife. All the love, all the affection and all the friendship of her husband, were hers and hers alone -exclusively!
When Muhammad Mustafa proclaimed his mission as the messenger of Allah, and told the Arabs not to worship idols, and called upon them to rally under the banner of Tawhid, a tidal wave of sorrows broke upon him. The polytheists began to thirst for his blood. They invented new and ingenious ways of tormenting him, and they made many attempts to stifle his voice forever. In those times of stress and distress, Khadija was a bastion of strength for him. It was only because of her and Abu Talib that the polytheists could not disrupt his work of preaching and propagating Islam. She made, in this manner, a most important contribution to the survival and propagation of Islam.
Khadija set basic standards that spell domestic peace, harmony, happiness and fulfillment, and she upheld and reflected them in her life. She demonstrated that the key to a family’s strength and happiness is the degree of emotional closeness between its members. She spelled out the rights and duties of husbands and wives. The standards set by her, became the “blueprint” for family life in Islam. Muhammad Mustafa and Khadija spent twenty-five years together, and in those years, they formulated the “laws” that make a marriage successful and a life happy. Since then, even in temporal terms, the rest of the world has not been able to find better laws. Islam incorporated the same laws in its own programme.
Khadija turned the abstractions of idealism into reality. Her life with Muhammad is concrete evidence of that fact. What she gave to the world was not merely a set of principles or theoretical ideas but an experience, rich in moments of pure enchantment with Islam, and subtle rhythms of love for Allah and His Messenger.”
Source
Share

The Mother of her Father History not only always speaks of the `great ones’, it …