The first part of this series discussed the Balfour Declaration signed by Arthur Balfour a century ago, and how the rights of the Palestinians were usurped because of this very document. The second part of this series explored the roots of Zionism and how the destructive Israeli policies directly correlate to colonialism; and the final part of this series will analyse the impact of Israeli terrorism and the importance of embracing our Islamic responsibilities when witnessing the struggle of our Palestinian brethren.

To begin, the mainstream media are very clever when it comes to displaying any news regarding the current state of Palestine – especially the BBC. We always hear of Palestinians “stabbing” and “attacking” IDF soldiers, but we never hear of what transpired before this. We seldom hear stories of how IDF soldiers terrorise children that travel to school on a daily basis – why? Because logic will dictate that this will make Israel look bad in the eyes of the world – and of course, we can’t have that now… (!) But it is time we reclaim the narrative and expose the brutality perpetrated by Israeli soldiers, ministers, politicians and their sympathisers, most importantly it’s time we recognise and understand the culture and power of resistance. When evil and enmity is causing moral corruption on the earth we live on, we must understand our duties. Appeasing the oppressors, or comprising our beliefs is something we cannot do – at any cost. This is why I struggle to fathom how interfaith initiatives involving Zionists fulfil any purpose; because in reality if we take away the fancy words and terminology, interfaith initiatives basically comprise of people sitting together and having a cup of tea (and a biscuit) discussing certain things that sound important; with no end goal. If anything, this gives Zionists the ‘go-ahead’ to continue with their evil ideology and perpetuation of terrorism. We cannot collude with those that harbour such a demonic ideology, rather we should work amongst ourselves and help each other group from strength to strength to tackle such ideologies. Let us not forget that this is eloquently mentioned by Imam Musa ibn Ja’far (as)

“To participate in the activities of the oppressors and to endeavour to achieve their evil objectives and to help them is equal to infidelity and to knowingly lean towards them is a Greater Sin and deserves Hell.” [1]

When it comes to identifying the root cause behind the injustices perpetrated towards those in Palestine, our association with Zionists essentially legitimises the oppression and torture inflicted upon the Palestinians, for it is the Zionists that stole the land from the Palestinians, and continue to murder and torment Palestinian families. Likewise, it is upon us to be cautious in which personalities and companies we endorse and support, there are various corporations that fund Israel, thus by boycotting certain companies would be a form of resistance – can you imagine if we all boycotted every single company that funds Israel, and purchased our products from other sources –  the result would be magnificent! You can check out this site, and see which companies are on the list.

In order to understand our roles and responsibilities, we need to constantly remind ourselves of the outcome we’re hoping for. For example, when working towards a deadline to submit, you set out a plan for yourself, and you give yourself time to understand the task at hand, and time to work towards the end goal you wish to attain, similarly, as activists if we remind ourselves of the goals and of our final outcome – we can collectively be victorious.

Palestine belongs to the Palestinians, our goal is to help reclaim the stolen land.

The Holy Quran emphasises our duties and responsibilities repeatedly, but how many of us actually exhaust our efforts in this regard? You see, the problem is, we often become far too invested in ourselves that we neglect the world around us, but it’s never too late – and there’s so much we can do collectively and individually. Given that the vast majority of us are social media users, let’s use it to support the Palestinian cause. As an activist, sometimes we forget the importance of educating and propagating the message – arguably the most important element of activism. We organise protests and demonstrations, yet we fail to educate those that are unfortunately unaware of the crisis. So, I would implore everyone to dedicate some of their time to enlightening others on the social media platform in regards to the Palestinian conflict. Twitter, Facebook and Instagram are used by millions (if not, billions) of users every day, and given the deliberate misinformation (aka fake news) that is spread consecutively – we need to do our utmost best in this day and age to spread the truth, across various platforms.

This week, over 60 UK parliamentarians urged the British government to take action against Gaza’s worsening humanitarian emergency; and whilst this is a great step, we need to continue to lobby our MP’s and other government representatives, to ensure our demands are met and the people of Palestine are given their dignity and freedom. 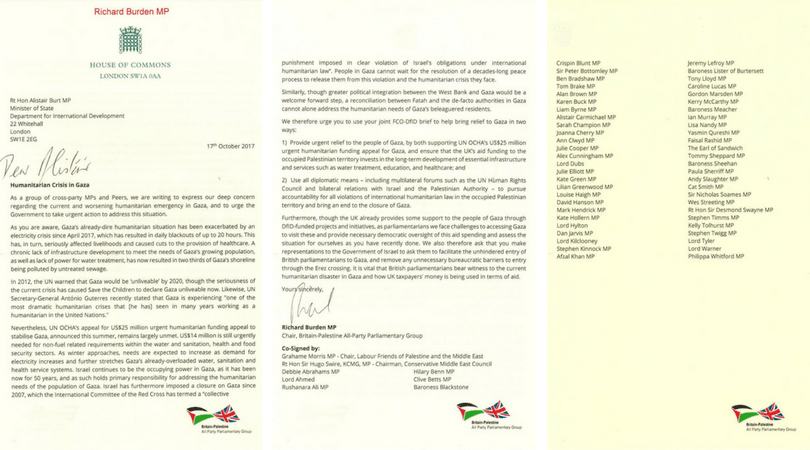 As constituents, we have the right to communicate with our MP’s and local elected representatives, and we need to continue to mount pressure on our government when it comes to the issue of Palestine. Politicians such as Jeremy Corbyn will always support such causes, but we need to work towards ensuring other MPs follow in the same footsteps. When writing to your MP, demand a written response, if you’re unhappy with the response they provide – write back to them again, but never give in or allow them to silence you. Our pressure and resistance are mandatory.

Why is the Muslim world silent?

You would think that a group of people who share your faith that are being oppressed would be assisted by their brethren – but not in the case of Palestine, sadly – purely because oil, dollars and power holds more priority for some Muslim leaders and nations. However, when it comes to The Islamic Republic of Iran this is not the case, for the Supreme Leader Ayatollah Sayed Ali Khamenei has always called on Muslims to stand by the Palestinians, and has always stated that Zionists pose a bigger threat to the region than we can imagine. Therefore our foresight when it comes to socio-politcial and economical issues is vital.

“Today the issue of Palestine is the most fundamental issue of the world Islam and it is intertwined with the destiny of non-Palestinians throughout the world of Islam. Government officials of Islamic countries should not think that if they leave the people of Palestine in the brutal clutches of their enemies, Israel would leave Muslim governments alone after it swallows up Palestine – of course, such a thing will never happen.” – Sayed Ali Khamenei [2]

Both statements emphasise the importance of our Islamic responsibilities when it comes to Palestine. Whilst Saudi Arabia and Israel maintain their ties and ideology, let us look to Iran for inspiration in supporting the cause effectively. To conclude, we often feel pressured into ignoring political issues and feel that we may be silenced, but having full reliance in the Almighty is paramount, especially when a plethora of evil entities are working to destroy our beliefs and our fundamental principles. When it comes to the issue of Palestine, stand up and speak out fearlessly.