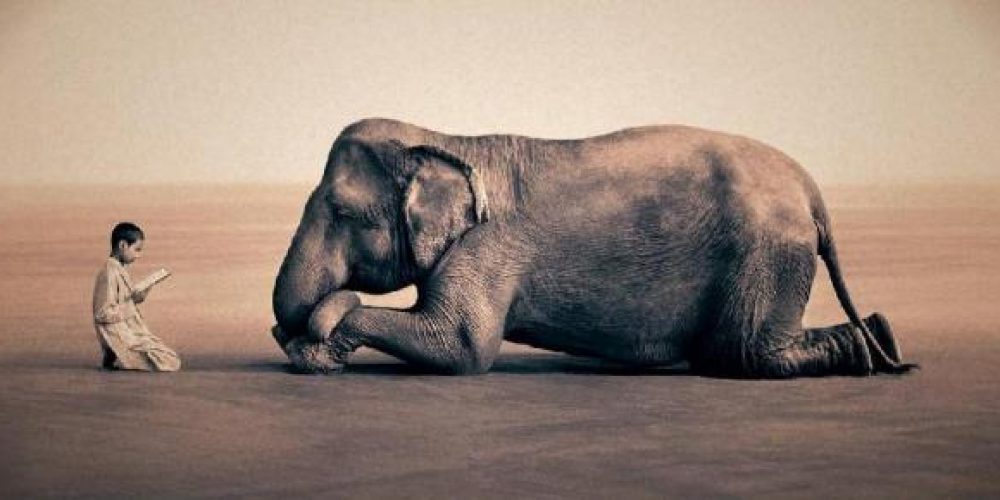 Man and Animal; The Distinction

Man himself being a kind of animal, has many things in common with other animals. At the same time he has many dissimilarities which distinguish him from other animals and make him superior to them.
The main and basic features distinguishing man from other living beings, on which his humanity depends and which constitute the source of what is known as human culture, pertain to two spheres: attitudes and inclinations.
Generally speaking the animals are endowed with a quality of perceiving and knowing themselves and the outer world, and in the light of this knowledge they strive to secure what they want and desire.
Like other animals man also has many wants and desires and in the light of what he knows and understands, he makes efforts to secure and realize them. Man differs from other living beings in that he knows more, understands better and his wants and desires are of a higher level.
This characteristic of man distinguishes him from all other animals and makes him superior to them.

Awareness and Desire in Animals

An animal knows the world through its external senses only. That is why, firstly, its knowledge is superficial and seeming. It does not penetrate the things and has no access to their internal relations. Secondly, it is partial and particular, and is neither universal nor general. Thirdly, it is regional, for it is confined to the living environment of the animal, and does not go beyond that. Fourthly, it is limited to the present and is unconcerned with the past and the future. As animal is not aware of its own or world’s history, it neither thinks of the future nor does it plan for it.
From the viewpoint of knowledge, an animal cannot come out of the framework of the exteriors, the particularity, the living environment and the present time. It never escapes from these four prisons. If by chance it does, it does so instinctively and unconsciously, and not by its own choice and will.
Like the range of its knowledge, the level of the wants and the desires of an animal also has a limited scope. Firstly, all its desires are material and do not go beyond the limits of eating, drinking, sleeping, playing, mating and building a home or a nest. For an animal there is no question of any spiritual needs, moral values etc. Secondly, all its desires are personal and individualistic, pertaining to the animal itself or, at the most, to its mate and the young ones. Thirdly, they are regional related to its living environment only. Fourthly, they are instantaneous, pertaining to the present time.
In other words, the dimension of the desires and inclinations of an animal’s existence has the same limitations as the dimension of its perceptive existence. From this point of view also, an animal has to live within specific limitations.
If an animal pursues an objective which is outside these limitations and which, for an example, pertains to its species in general and not to one individual or pertains to the future and not to the present, as is observed in the case of certain gregarious animals like bees, it does so unconsciously, instinctively and by the direct order of the power which has created it and which manages the whole world.

Awareness and Desire in Man

Man’s domain both in the sphere of his knowledge, information and outlook and in the sphere of his desires, wants and inclinations is very vast and lofty. Man’s knowledge passes from the exterior of the things to their inner reality, their mutual relations and to the laws governing them. His knowledge does not remain confined to any particular place or time. It surpasses all such limitations.
On the one hand, his knowledge extends to the events which took place before his birth, and on the other, it extends to other planets and stars. He gets acquainted with his past as Well as his future. He discovers his own history and that of the World, which is the history of the earth, the sky, the mountains, the rivers, the plants and the living organisms. Not only he thinks of the remote future, but also applies his thought to infinities and eternities, some of which he recognizes. Man goes a step further from identifying the individuality and particularity, and with a view to control nature, discovers universal rules and general truths prevailing in the world.
From the viewpoint of his ambitions and aspirations also man holds an outstanding position, for he is an aspiring, high thinking and idealistic being. He seeks objectives which are not of material and profitable nature; objectives which are in the interest of entire humanity and not confined to himself and his family or to any particular region or to a particular period of time.
Man is so idealistic that he often gives more importance to his creed and ideology than to any other value. He may consider service to others to be of more consequence than his own welfare, and may regard a thorn stuck into the foot of someone else as being stuck into his own foot or even his own eye. He feels sympathy with others and shares their joy and grief. Man becomes so devoted to his creed and sacred ideology that he easily sacrifices his life for them.
The human aspect of the human culture which is considered to be its true spirit is the outcome of such feelings and desires.

Basis of the Distinction of Man

Man’s vast and extensive conception of the world is a product of the collective human effort made through so many centuries. The information so acquired has been piled together and developed. This information after it has been processed and regulated has come to be known as “science” in the wider sense of the term, which is the sum-total of human ideas about the cosmos. It includes philosophy, a product of the collective human effort which has been given a special logical form.
Spiritual and higher human tendencies are born of man’s belief in certain realities of this world and his devotion to them. These realities are neither individualistic nor material. They are comprehensive and general involving no question of any economic gain, and are in their turn the outcome of certain conceptions of the world either presented to mankind by the Divine Prophets or produced by a sort of idealistic thinking initiated by some philosophers.
In any case the higher spiritual and super-animal tendencies of man if based on a doctrinal and intellectual infrastructure take the name of faith.
Hence we come to the conclusion that knowledge and faith constitute the main and the basic difference between man and other living beings and that knowledge and faith form the basis of man’s humanity which depends on them.
Much has been said on the distinction between man and other species of animals. Some hold that there is no basic difference between the two. According to them the difference of knowledge is that of quantity or at the most of quality, but not that of essence. They attach little importance to man’s vast, wonderful and marvellous achievements in the field of knowledge, which have attracted the attention of the great philosophers of the East and the West.
This group of scholars maintains that from the point of view of his wants and desires man is no more than an animal.1 Some others believe that the main difference is that of life. Man is the only fully living animal. Other animals have no feelings, and are not conscious of pleasure and pain. They are just semi-living machines. Therefore the true definition of man is that he is the living being. 2
Other thinkers do not believe that, and maintain that there are basic differences between other living beings and man. It appears that each group of these scholars has concentrated on one human characteristic and distinction. That is why man has been defined in so many different ways. He has been described as a rational animal, an absolute-seeking being, an unending being, an idealist, a seeker of values, a metaphysical animal, an insatiable being, an indefinite being, a responsible being, a forward-looking being, a free agent, an insurgent, a social order loving being, a beauty-loving being, a justice-loving being, a double-faced being, an amorous being, an obligated being, an intuitive being, a being believing in double standard, a creator, a lonely being, an agitated being, a fundamentalist, doctrinaire, a tool-maker, a supernaturalist, an imaginative being, a spiritualist, a transcendentalist etc.
Obviously each of these descriptions is true in itself, but if we want to find out an expression inclusive of all the basic distinctions, then we should say that man is an animal endowed with knowledge and faith.