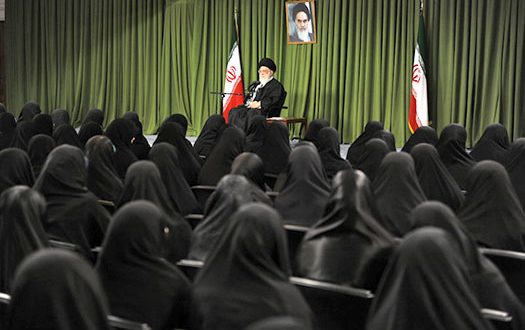 “The Islamic view of women brings about dignity, honor, growth and an independent identity for women. This is our claim and we can prove it with very compelling reasons. In an Islamic environment, a woman achieves scholarly growth. She achieves personal growth. She achieves ethical growth. She achieves political growth. She becomes a pioneer in the most essential social issues. Yet she remains a woman. Being a woman is an advantage, a source of pride. Isolating women from womanly environments and characteristics will not bring about any honor for women. Housekeeping, raising children and taking care of one’s husband must not be considered a source of disgrace for women. Western culture made the family collapse. Today one of the great problems of the Western world is the breakup of the family and the increase in the number of abandoned children. The West will suffer from the consequences. Social developments build up over time. The West will be harmed most by this problem and the flashy materialistic civilization of the West will collapse along the fault lines of this problem.”
[Jul 11, 2012]

Women are the combination of delicacy and sharpness

“The corrupt Western world tried to impose its wrong and misguided redefinition of women on the people of the world – which was degrading to women. They tried to convince the world that in order to develop a personality, women have to look attractive to men. What kind of personality is that? They said women have to give up their modesty and morality and use their physical appeal in order to gain the approval of men. Is this humiliation or respect? Influenced by Zionist elements, the ignorant and intoxicated Western world presented this idea under the guise of respect for women. And some people were taken in. The greatness of women does not depend on their ability to attract the attention of immoral men; this is not an honor for women. It will not bring about respect for them. It will only bring about humiliation. The greatness of women depends on their ability to preserve their God-given modesty. Their greatness depends on combining this ability with pious dignity and a sense of responsibility. They should use their feminine delicacy and the sharpness of their faith appropriately. The combination of delicacy and sharpness is particular to women. That is the advantage that Allah the Exalted has bestowed on women. Therefore, the Holy Quran mentions the names of two women as examples of religious faith for both men and women. “And God sets forth, as an example to those who believe, the wife of Pharaoh” [The Holy Quran, 66: 11]. “And Mary the daughter of Imran” [The Holy Quran, 66: 12].God mentions the wife of Pharaoh and Mary as two examples of faith. These are some signs that point to an underlying Islamic ideology.”
[Apr 21, 2010]
Share