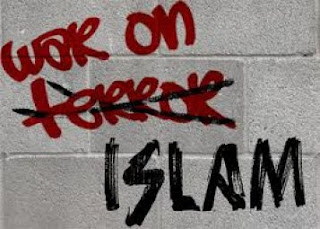 When my kids threw a fit after I suggested they take treats to school to celebrate the Eid holiday with classmates, I threw one back.

“You should be proud of you are!” I chided but in a crescendo with more colorful language and while forcefully putting dinner plates into the kitchen sink.

I know I overreacted–my eldest daughter later agreed to do a class presentation on Eid in conjunction with a Muslim classmate–but their reluctance stoked my fear that growing up in an Islamaphobic world was doing a number on their self-esteem. Was this hue and cry the first sign their pride in Islam was cracking under the constant barrage of Muslims-are-violent-backwards-uncivilized-terrorists media propaganda?

If anybody had doubts that a psychological war (mainstream media, radio talk shows, Hollywood, politicians, think tanks) was being waged on Islam, recent films maligning Prophet Muhammad (S) and the religion should put that to rest. American film “Innocence of Muslims” was translated into Arabic in August and has ignited protests this week across the Muslim world. Earlier this month the United Kingdom’s television Channel 4 broadcast the documentary “Islam: The Untold Story,” which claims there is little evidence about the origin of Islam or life of Muhammad (S).Indeed, the religion of Islam, which calls for political, economic and social systems based on the universal principles of truth, peace and justice is considered a contemporary threat by the 1% who monopolize the world’s wealth and power and want to keep it that way.After the fall of communism, the “class of civilizations” to quash this religious ideology was put into high gear by falsely accusing Muslims of the attacks on 9/11 to gain public support for military ventures in Muslim lands as well as to instill guilt, humiliation and self-hate in the Muslim mind.

“This is a political movie,” said the writer of “Innocence of Muslims,” whose true identity is in question. “The US lost a lot of money and a lot of people in wars in Iraq and Afghanistan, but we’re fighting with ideas.”

Imam Abdul Alim Musa of Masjid Al-Islam in Washington is among the Muslim leaders in America who understand this. That’s why he established the Islamic Institute for Counter Zionist American Psychological Warfare in 2010.

“You cannot stop the West from making these anti-Islamic movies,” Musa said. “What we can do is improve our communication and educational processes to teach what Islam is and not what Islam is not.”

The latest wave of media propaganda demonizing Islam comes as countries in the Muslim East make new inroads in their struggle to free themselves from centuries of colonialist, imperialist and Zionist rule, with its oppressed masses turning to Islam to bring freedom, peace and justice to everyone.

“A human being should flow like a river who does not ask about the nature of the land it flows on, whether it is fertile or infertile,” said scholar Sayyed Fadlallah when encouraging his students to strive for social justice for all.

God teaches us that only a free, confident mind can bring liberation from others and submission to Him alone. He recounts how Moses, the foster son of Asiya (one of the four perfect women of all times) tried to rouse his people–who had endured generations of oppression under Pharaoh–by reminding them of who they were before the onslaught of slavery.

Quran: “And [remember] when Moses said to his people: ‘O my people, call in remembrance the favour of God unto you, when he produced prophets among you, made you kings, and gave to you what He had not given to any other among the peoples.” (5:20)

Likewise, today’s Muslims must reinvent ourselves into who we were taught to be by the Prophet (S) before the West came in as foe (enslaving our minds into passivity through domination) or friend (activating violent elements in our societies to bring change as in Afghanistan, Iraq, Libya and now Syria).

When I found out the “1001 Inventions From Muslim Civilisation” exhibit was on display at the National Geographic Museum in Washington during our visit there earlier this month, I made sure my kids saw it. And they loved it, especially the interactive games simulating Muslim contributions, such as the Spaniard Abbas ibn Firnas’ attempt to construct a flying machine.

While walking out through the museum gift shop, I asked the girls to pick up some brochures to show their friends when they got back.

“Noooooo!” came the reply in unison.

It’s going to be an uphill battle, I suppose, but it’s one we have to keep fighting.