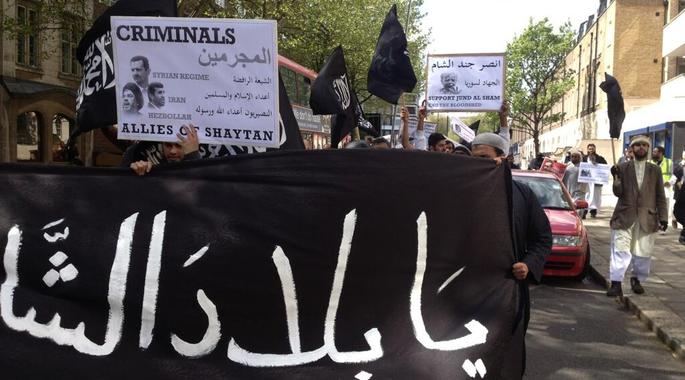 Salafi protestors marching against Shia Islam, alongside Anjem Choudary, a radical Salafi leader, clashed with other Muslims in London’s Edgware Road on Friday 10th May.
A video filmed by CoelusMedia begins with Choudary addressing the camera discussing the incarceration of an unnamed individual, but then quickly shows scenes of a violent scuffle and attack on Edgware Road. The original video upload was entitled, “Muslims fight Muslims on the streets of London during a Syrian demonstration on the Edgware Road”.
Choudary, who is famous for leading the now proscribed “Islam4UK” group as well as several other splinter organisations, led a march entitled ‘The Shia Enemies of Allah” from Regents Park Mosque which was due to end at the Syrian Embassy. Protestors marched with hard-line Salafist placards and Alqaeda flags, many of which read, “Support Jund Al Sham”.
Flag-wielding demonstrators can be seen in the video (below) aggressively hitting someone with their flagpoles, while many run around and track down one man, thought to be of the Shia Muslim faith, who is shown bloodied after the initial clashes.
In another portion of the film, one protestor is heard telling another not to attack a passerby because he was Sunni. 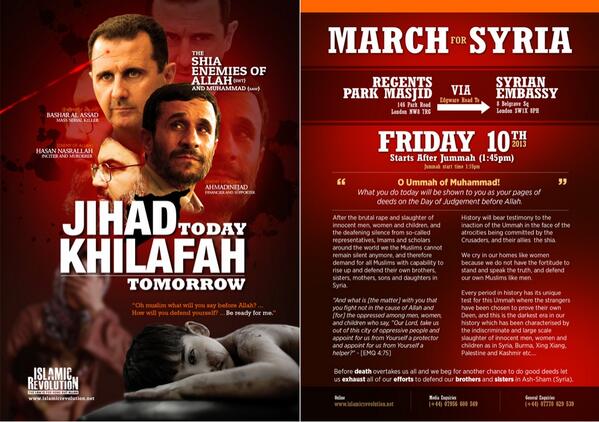 The protestors were marching in opposition to Syrian President Bashar al-Assad, who they are known to deplore for his Alawi faith. Protestors also took up the cause against Iranian President Mahmoud Ahmadinejad and Hezbollah leader Sayyid Hasan Nasrallah, who they deem as “Shia Enemies of Allah” for their Shia Muslim faith.

The protestors are known to be hard-line Salafists, who have previously praised terrorism, advocated Khilafah in Britain, and disturb ceremonies honouring British troops.

The Jund al Sham group that they were marching in support of is thought to be a relatively Salafi jihadist group in Syria, which announced its formation in the Syrian city of Homs on December 23rd 2012.
At the beginning of the video, Choudary can be heard interupted in mid speech saying, “One second, one second. There’s a fight taking place.”
Police intervened in the scuffles, while several are thought to have been injured and can be seen bleeding in the video below.
httpv://www.youtube.com/watch?feature=player_embedded&v=R6agkChVOI8