Every year, millions of people from around the world commemorate the tragedy of the martyrdom of the grandson of Islam’s last prophet, Hussein ibn Ali. Dedicated pilgrims flock to the holy sites of Iraq, Karbala in particular, in massive numbers to offer their condolenses and visit the beloved martyr at his burial site. The story of Karbala has inspired a culture of service to the visitors of Karbala. This is a photo essay that circles around the service to those visitors of Imam Hussein, with visitors and servants alike sharing their thoughts on the man that is survived by his legacy, Hussein ibn Ali. 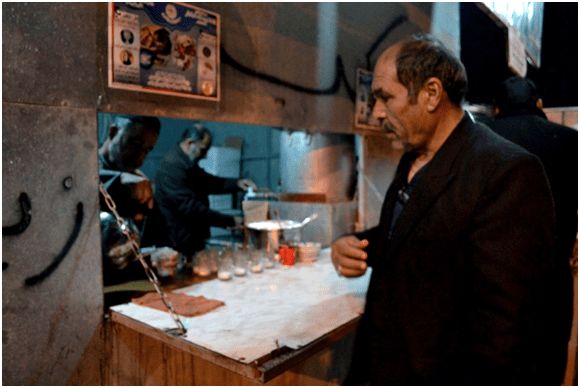 “The pilgrims cannot arrive to Hussein without this service…Imam Hussein is for humanity, not for Sunni or Shia, for all,” said Abu Ali from Basrah, Iraq, back right. Abu Ali serves tea on the road between Najaf and Karbala, a road that millions walk on every year to reach Karbala by foot. 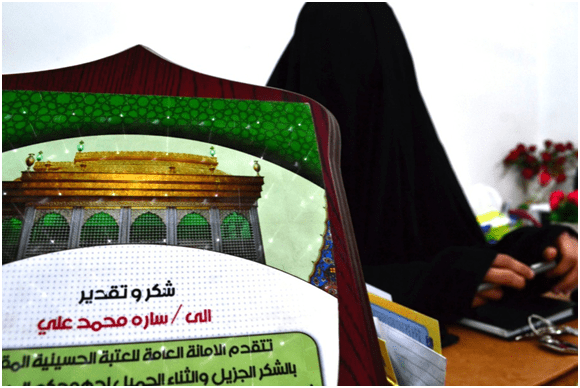 ”I graduated as an engineer but I applied to work here after graduation. I liked to serve Imam Hussein even though (my service) isn’t adequate. Imam Hussein is a revolution of the centuries, past and present, day after day, year after year, this revolution will continue and renew, as if the tragedy happened in recent time. The millions of visitors that come to Imam Hussein must have an effect on all those who witness the scene, this scene will be a motivation for witnesses to come and visit in person,” said Sarah Mahmoud Ali Alabdi, from Karbala, Iraq, director for Center of Hawra Zainab, a department for the benefit of girls and women under the Imam Hussein Shrine. 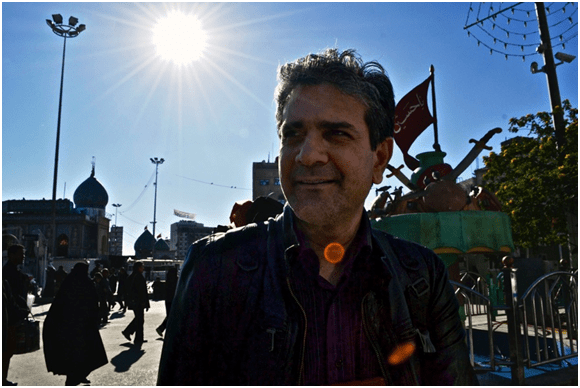 “I have come for the visitation of Imam Hussein…I don’t remember my first gathering (majlis), but I have been attending from the time I was in my mother’s lap,” said Agebe from Tehran, Iran. 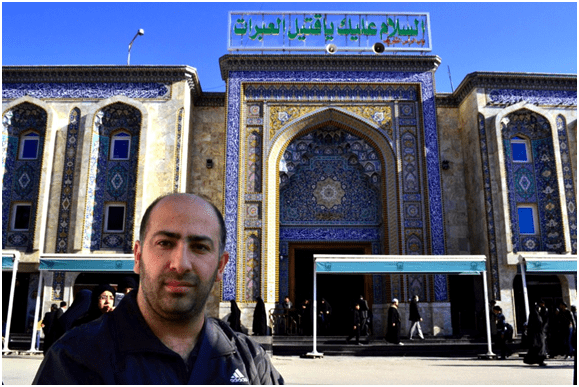 “Imam Hussein is a messenger of peace, love, blessing, and giving,” said Hassan Ahmad from Lebanon. 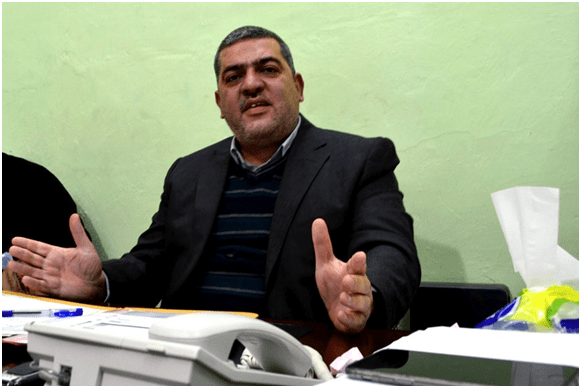 “For fourteen centuries, the enemies of Imam Hussein have attempted to stop the followers of Imam Hussein but his memory remained, look at his ever lasting memory today and their (enemies) depleting memory…(with this memory), we feed between 10,000 and 20,000 people a day (during the visitation days) and yet, the tents beat us in this regard, the service from Basra to Karbala beats us in serving meals daily,” said Hajj Mustafa Abudega from Karbala, Iraq, director of Hospitality Services for the Imam Hussein Shrine. 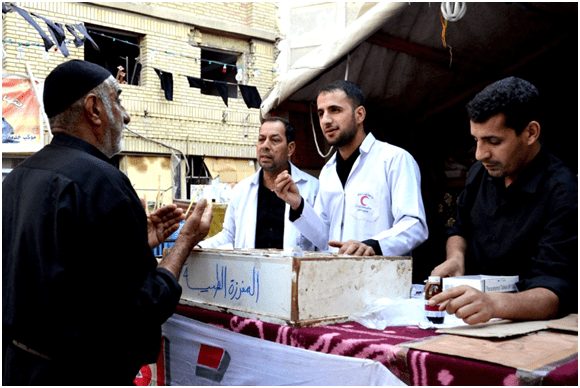 “Love of Hussein (brought me here)…it is our inspiration in the beginning and in the end, and the visitors of Imam Hussein are the guests of the Iraqis. We save up all year long to buy medicine to treat the sick (visitors). Whatever we serve, it is insufficient,” said Dr. Ammar Jassim Ibrahim from Baghdad, Iraq center. 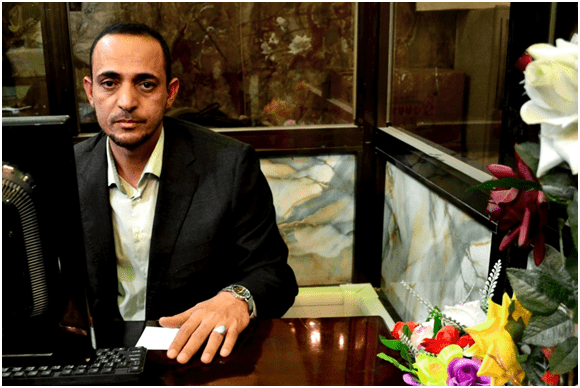 “After the fall (of Saddam) in 2004, we were honored to work here and serve the visitors and Imam Hussein. If it were not Hussein, there would not have been Islam (today)…he sacrificed with his blood, with his children, with his family, for the path of statement ‘There is no God but God, and Muhammad is His messenger.’ The enemies before wanted to return to the times of ignorance before Islam, to return people to the worshipping of many gods…(but) Imam Hussein was victorious, and we are working in this place today, because it is Imam Hussein who held together Islam,” said Hasan Ali Kadhim Aljaboori from Karbala, Iraq with the Media Unit of Imam Hussein Shrine which distributes thousands of publications in different languages all over the world. 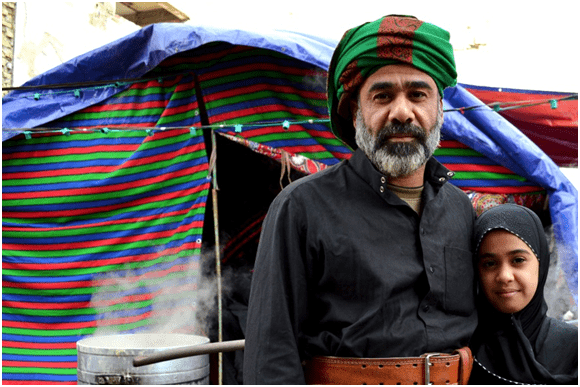 “Service of the visitors is honorable, Aba Abdallah (Imam Hussein) is our model of sacrifice, martyrdom, parenthood, and in this service, I feel comfort. What ever we give is not enough. From five thirty in the morning with the prayer, we wake up and until about one or one thirty in the morning, we don’t sleep, we just stand. We make breakfast, lunch, dinner, and then we prepare sleeping accommodations for the visitors, but I swear by God and by Imam Hussein, I wish these days (of service) would extend another five days. We feel that a day of service is only an hour of service,” said Abu Tofuf with his daughter, from Amara, Iraq who serves visitors in Karbala, Iraq during the annual Arba’een (or 40th day after the death of Hussein ibn Ali) pilgrimage. 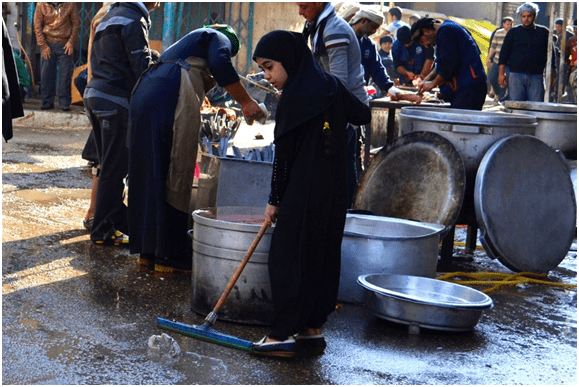 “I don’t want the pilgrims to get dirty,” said Tofuf from Amara, Iraq serving the visitors in Karbala, Iraq. 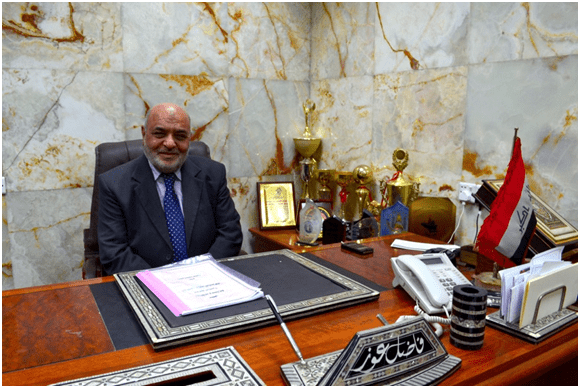 “The position of Imam Hussein is that he would pray for his enemies’ forgiveness, that is who he is…he is for humanity. Before (this) I used to work in business and my life was an ordinary one of prayer, fasting, and visitation (of Imam Hussein), but after 2003, I took up this position to serve the Imam. It is an honor that is of benefit for this world and the next. I am responsible for the workers of the Imam (Hussein Shrine). I listen to their concerns and supervise their service weekly. We train them in morals and Islamic jurisprudence. We serve even to the simplest of needs for the visitors, and we ask our workers to deal with the visitors with respect and wisdom. The workers understand that in this service of the visitors of Imam Hussein there is a potential threat of death (from enemies), yet they view this as an opportunity,” said Hajj Fadl Awz, from Karbala, Iraq, department head within the Imam Hussein Shrine.
Written by: Aseel Machi
Special thanks to Mulla Ammar, Butool Jafri, and Zainab Hasan.