It is quoted from the Prophet of Islam to have said: “Fast, you’ll be healthy”. An Egyptian pyramid inscription in 3800B.C also reads: “Humans live on one-quarter of what they eat; on the three-quarters live their doctor!”

The three fathers of Western Medicine; (Hippocrates, Galen & Paracelsus) prescribed fasting as the greatest remedy and the physician within. Life Magazine in its September 1996 issue considered fasting: the healing revolution.There are more than 500 medical journal articles available on therapeutic fasting on the internet.

The outstanding physicians named fasting as being; the medicine for the 21st century. They believe the human body is designed to heal itself, if only given the opportunity. Dr. Otto Buchinger; Germany’s great fasting therapist after more than 100,000 fasting cures says: “Fasting is, without doubt, the most effective biological method of treatment.. it is the operation without surgery… it is a cure involving exudation, redirection, loosening up and purified relaxation.”

He furthers therapeutically; fasting cures many of our modern illnesses, including the following: allergies, cardiovascular disease, chronic diseases of the digestive system, degenerative and painfully inflammatory illnesses of the joints, myriad disturbances in one’s eating behavior, glaucoma, initial malfunction of the kidneys, tension and migraine headaches, as well as skin diseases. Preventively, it’s designed to cleanse, and to regenerate, rejuvenate and restore a person’s sense of well-being, in body, mind and soul. As Doctor Buchinger would conclude: “When the body fasts, the soul is hungry; when the body becomes lighter, the soul also craves relief.”

Dr. Joel Fuhrman in Fasting and Eating for Health notes: “Fasting has been repeatedly observed to alleviate neuroses, anxiety and depression.”

Fasting marvelously decomposes and burns all the cells and tissue that are aged, damaged, diseased, weakened or dead, a process called in medicine autolyze or self-digest or detoxification.

Michael Rosenbaum, M.D., Director of the California-based Orthomolecular Health Medicine Medical Society, notes on the significance of fasting as a detoxification program: “The hidden cause of many chronic pains, diseases and illnesses may be invisible toxins, chemicals, heavy metals and parasites that invade our bodies . . .Chances are slim that your doctor will tell you that toxins may be the root cause of your health problems. He or she may not even know about how these toxins are affecting your body . . . As your cells go, so goes your health. If your cells have been invaded by toxins and dangerous chemicals, your resistance to disease is diminished. Clean and nourish your cells, and you’re on the road to better health.”

When by fasting you stop the input of nutrition for a while, then a flurry of cleansing starts up, the rugs are lifted and the dirty dishes are brought out of the cabinet where they were stashed. Cleansing begins in earnest. U.S Congress approved $20 million in 1998 for funding of the National Institutes of Health’s fledging office of Alternative Medicine. This went up to $50 million in 1999 and to $68.7 million in 2000 which shows the growing interest of the Congress.

Those fasting sometimes experience side effects during the first days. The side effects may vary from fatigue, malaise, headaches, vomiting to the symptoms of cold and flu. These reactions are sometimes called in medicine healing crises, which are temporary and caused due to elimination and cleansing of toxins. A fasting person should be patient and let this period pass.

I should however stress that there are circumstances, which exempt people from fasting as mentioned in detail in the books of Islamic Jurisprudence, e.g. a diabetic who not only needs to take regular medication but their diet is very strict through out the day, hence should not fast, or else not only his/her fasting is void, it is even considered sinful. Similarly, a pregnant woman is exempt from fasting if it is going to either harm her or the baby. In general, the rule is that fasting is forbidden, if the person is confident that fasting will be physically harmful to them. 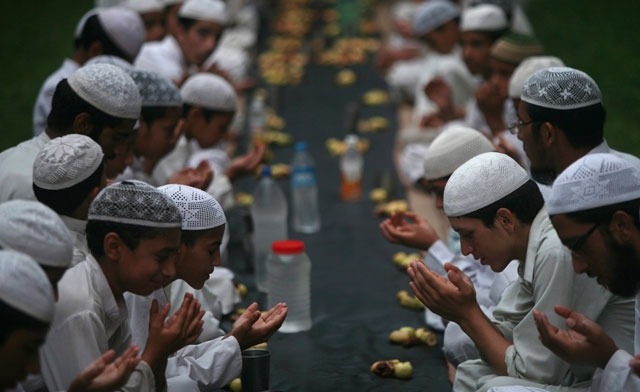 “Truly! Allah wrongs not mankind in aught; but mankind wrong themselves.”10:44

A man wrote a letter to Imam Askari (a.s) asking him: “For what reason did Allah make fasting compulsory?”
The Imam (a.s) wrote in reply: “God has made fasting compulsory so that the rich shall find the pain of hunger so they have a mercy upon the poor.”

Starvation and its related diseases causes one person per second to die on this planet, 75% of them being infants and children under the age of 5.

“A massive tragedy is unfolding in Ethiopia as thousands of starving people are expected to die. Without help, many expect the death toll to be in the millions. Yet little is being done in the U.S.”

According to the same newsmagazine in the last famine, there were approximately one million deaths.

Now compare the above news with the following:

‘More than half of U.S adults (20+) are overweight. Nearly one-quarter of U.S adults are obese.’ And the figures are drastically increasing. This is despite all weight-loss programs in these countries.

According to Wolf & Colditz in ‘Current estimates of the Economic Cost of Obesity in the US 1998’: “Economic cost in the U.S related to the overweight in 1995 was the total of $99.2 billion. And according to the same source Americans spend $33 billion annually on weight-loss products and services. This includes low calorie foods, artificially sweetened products; such as sodas and memberships to commercial weight-loss centres.

And if you want to know whether you are among those over-weight people in a time when starvation causes one person per second to die, here is your scale.

The biggest problem facing the world today is not people dying in the streets of Mumbai, Zimbabwe or Ethiopia; it is rather the lack of a sense of caring for those disadvantaged people whose rights have been usurped by others. Fasting provides the opportunity for the faster to feel and find for himself or herself the pain and agony that a poor person is going through. A fasting person can also keep his or her money, usually spent on lunch, away to feed a group of poor people with. Thus, Zakatul-fitreh is compulsory and is regarded as the compilation of fasting.

Nonetheless, some fasters sleep during the day as much as they can to avoid the so-called pains of fasting, and upon sunset enjoy a feast greedily and hence lose the entire medical, social and spiritual benefits of it.

Reduction of crimes during the month of Ramadhan is another social benefit of fasting.

Despite all the abovementioned benefits of fasting, we believe the main benefits of religious fasting are its spiritual rejuvenation and healing.

Fasting is prevention from certain things most of which are not only normally permissible but also even quite essential in our lives. By fasting we avoid food and drink which are the main nutritional sources for our body. This challenge against permissible and normally useful inputs is to give us the strength to avoid taking things that are harmful, including toxins, for our body and soul. In other words, I am able to fast against Halal food and soft drink over a month, should I not be able, by far, to fast against intoxicants and Haram foods over a year?

This is in spite of the fact that the first are my essential needs and the latter are not. A religious fasting is not just a physical diet program. When we fast from food we are expected to also fast from all harmful and forbidden actions and intentions. I may call this process a spiritual detoxification.

Fasting, if made with the intention of closeness to God, ascends one from the kingdom of animals to the realm of angels. You therefore, close your physical mouth to open your spiritual mouth. You fast your body to let your spirit feast with mysterious morsels. When you fast, you empty your stomach from the bread to fill it up with Unique Glorious Pearls.

Fasting is the Heart of Servitude

Source: Fasting and the Holy Month of Ramadhan