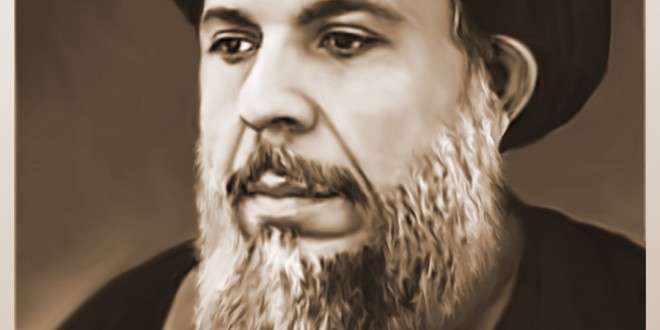 Ayatullah Baqir-al-Sadr, during the final days of his last Ramadhan, gave a powerful speech to Religious Scholars. This speech is translated in the book ‘Trends of History in the Qur’an’ by the same author. Some excerpts follow as this is not the whole speech, just some parts. The Grand Ayatollah Martyr Sayyid Muhammad Baqir Al-Sadr was executed on April 8th 1980, by the Ba’athist regime. The distinguished leader Ayatollah Sayyid Muhammad Baqir Al-Sadr was a co-founder of the Islamic political movement in Iraq established in the late 1950s.

“Every love which occupies the centre of the heart of a person is of either of the two kinds. We call the perfect love the double grade love and the love which is not so perfect, the single grade love. To begin with, (single grade) love becomes the basis of man’s sentiments, feelings, emotions and desires. After attending to his job or immediate need, man soon returns to his object of love, because love occupies the centre of his thoughts, feelings and sentiments.”

“In the case of double grade love, man’s entire attention is drawn by the object of his love and nothing can divert his attention from it. He is never inattentive to the thought of his beloved.”

“Both these kinds of love are found in the case of the noble love of Allah. Single grade love appears in the hearts of the pious believers whose hearts are free from the impurities of the base affairs of this world. As soon as they are free from their immediate engagements, they return to the question which is the object of their love.”

“As for double grade love, it is found in the hearts of the Prophets and Imams. You all know Imam Ali ibn Abi Talib, in the vicinity of whose tomb we live (Najaf). This great man has said “I never saw a thing but I saw Allah before it, after it and along with it”. (Qablahu, wa ba’dahu wa ma’ahu).”

“In fact, this was because love of Allah occupied his great heart and conscience in such a way that it concealed everything else from him. Even when he saw human beings, he saw Allah. When he looked at Allah’s bounties, he remembered Him. This bond with Allah was always present before his eyes, for it was Allah alone whom he truly loved and to whom his hopes and aspirations were directed. He never allowed anyone to divert his attention from Allah”.

“Love of the world also reaches the stage where man does not see anything but the world before it, after it and along with it. Whatever he does, he does it for some wordly gain. He cannot devote himself to pious deeds for more than a few days. This is double grade love of the world. Imam Sadiq has said, “This world is like sea water. The more one drinks of it, the more one gets thirsty.”

“It was love of Allah that was the basis of Imam Ali’s courage and bravery. His courage was not that of a ferocious beast. It was the courage produced by the faith and love of Allah. He was over 60 when he fought against the Khwarij and in a single engagement killed 4000 of them. He was also at the height of bravery in regard to being patient and not pressing his rightful claim. He kept quiet when he was required by Allah to overlook his right. At that time, he was in the prime of his life. His conscience was aflame with the fire of youth. But Islam had told him to keep quiet and be patient, despite the violation of his rights.”

“After all what is this world of ours? It is a collection of imaginery and fictional things. Harun-al-Rashid’s world was very imposing. We curse him day and night. We say that we are better, more pious and more God-fearing than Harun was. Has the world of Harun-al-Rashid been offered to us and have we rejected it? If not, how can we claim to be more pious than him. The world offered to us is not that of Harun. It is much less limited and comparably insignificant. It is transient and shorter and not as vast and extensive as that of Harun. For the sake of this world, he imprisoned Imam Musa-e-Kazim. Are we sure that if we get that world, we would not throw the Imam into prison? Have we tested ourselves and put this question to ourselves? Has the world of Harun ever been offered to us so that we know we are more pious?”

“In our world, there can be no truth except that of Allah’s good pleasure. Had the Imam worked for worldly gains, he would have been the most miserable person. Yet when he worked for Allah, he said on his deathbed “By the God of the Ka’aba, I am a successful person”. This world is not for the students of theology. A student looking for this world can get neither this world nor the next. Therefore, it is incumbent upon us, as students, to confine our efforts to seeking the next world for this world has no value to us”.

“We should think any moment as possible for our death. At the time of his death, my father was not as old as I was (1). My brother died at a younger age than I did. I have now completed the span of my lifetime (2).”

“We ask Allah to purify our hearts, and to brighten them with faith. May He turn our mind more towards seeking His pleasure and fill or hearts with His love, His fear and belief in Him. May he help us according to the teachings of his book, Ameen.”
Ayatullah Baqir Sadr.

Like all other prayers, the prayers of the month of Ramadan draw us towards the …