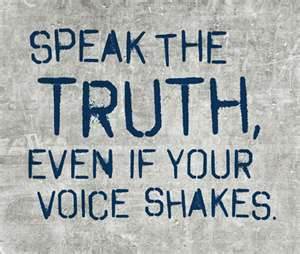 Stand Up and Speak Out

Though she’s had her name smeared, her car egged and her phone pranked, a non-Muslim friend of mine continues her battle against Islamophobia, serving as an inspiration for Muslims who claim to be custodians of the truth but increasingly don’t dare speak out for fear of repercussions in a post-9/11 world.

My friend let her fingers do the talking this summer when she discovered a newspaper was spewing lies about Islam and Muslims in the midst of a new mosque going up in our town. She started calling companies advertising in the paper and told them she was boycotting their goods. When some responded by pulling their ads from the weekly publication, her troubles started.

But the intimidations did not stop her commitment to speaking the truth (haqq in Arabic), which is a virtue of human behavior, a necessity of human society and an innate God-given quality we must all recognize, declare and struggle for within ourselves and in society as God repeatedly reminds us in the Quran, which mentions the word haqq more than 300 times.

In this time of rampant worldwide oppression, where webs of lies, deception and falsehoods permeate the media airwaves, Hollywood movies and political debates in order to justify the continued exploitation of the masses, it is essential we fulfill our obligation to expose the truth about the realities of this world.

Ali, husband of Fatima (one of the perfect women of all times), said: “Know that – may God have mercy on you – you are living at a time when those who speak about right are few, when tongues are loath to utter the truth and those who stick to the right are humiliated. The people of this time are engaged in disobedience…their learned men are hypocrites, and their speakers are sycophants.”

God inspires us to speak the truth to power by giving us examples of heroes throughout history who persevered and attained victory despite being mocked, shunned and attacked by the establishment, much as truth-tellers are today.

“They speak the truth before those people who hate it,” says scholar Muhammad Baig. “That’s when it really counts.”

One such person was Prophet Moses, foster son of Asiya (another perfect woman). He was told by God he was chosen to be a Prophet because, “I found no one better and more truthful than you.” In addition to having deep reliance on God, Moses teaches us that we must develop perseverance before speaking up to help stay commited to the truth during the inevitable backlash.

The inscription on the ring of Moses: “Have patience that you may be rewarded. Speak the truth that you may succeed.”A media outlet currently under siege for propagating the truth and exposing corruption and injustices is Press TV, a 24-hour English language news network owned by the Islamic Republic of Iran Broadcasting and headquartered in Tehran.  Earlier this month the European satellite provider Eutelsat SA pulled the plug on several Iranian satellite news channels on the orders of the European Commission of the European Union, which was ironically awarded the Nobel Peace Prize days earlier.

“They want to silence these channels because they talk the truth,” says Mohsen Saleh, a professor at Lebanese University.

Maybe I should get my friend to put in a few calls to Eutelsat….

Ayatullah Baqir-al-Sadr, during the final days of his last Ramadhan, gave a powerful speech to …