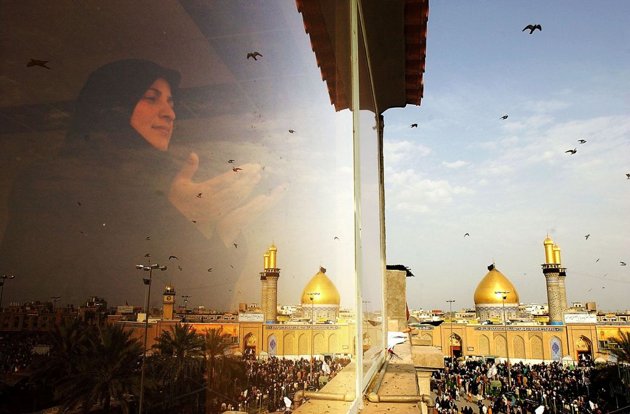 A woman is a divine being who, in the revolutionary school of Imam Khomeini – which represents pure Islam –, is promised freedom and human qualities more than men. Throughout history and under the ruling of profanity and polytheism of the old and new trends, women have always been led into enslavement. The pure materialistic and even abject portrayals of women in various historical times have manifested themselves in the worst possible form at the current time.

The outcomes of the plots designed and implemented by devilish functionaries have turned the divine aspects of women upside down. The victory of the Islamic revolution of Iran with Imam Khomeini’s leadership offered a different viewpoint toward women. A glance at the situation of women before and after the Islamic revolution clearly shows that the previous criteria and measures entangled the individuality of women to the extent that consumed their traits as facilitating tools to fulfill men’s unlawful desires; whereas, after the triumph of the revolution, a lot of stress has been placed on maintaining the nobility and development of women.

An extensive look at history shows that various social communities imposed a lot of cruelty and injustice on women one way or the other. According to Imam Khomeini, the historical oppressed situation of women is categorized into two eras: “the Age of Ignorance” and “the Pahlavi era.” At both times, the plight of women had been greater than men or, in some occasions, incomparable to them. “During the reign of Reza Khan which was the beginning of Pahlavi’s Age of Ignorance, he –as the protégé of the West- made a huge effort to corrupt the culture and history of Iran. The women were subjected to his despotism more than men; in the beginning, women voluntarily and later under compelling circumstances were captivated through deceptive models the government offered. They took advantage of women by fulfilling their satanic purposes and unlawful needs. It is obvious that the women who opposed even slightly to the current opinions and situations imposed by the governors of the time would be bothered eventually due to the despotic nature of the government, and they would be deprived of their natural rights on the pretense of defending the freedom. On the other hand, based on this approach, the social presence of women was summarized into the commercial use of the presence of women in the society.”

Women had two positive and influential roles in the victory of the Islamic revolution; the first role was their direct and positive participation in the fight itself, and their second role which had a greater impact was their ability to show patience, cooperation, and endurance against the hardships of the struggle. Many women in the Islamic revolution encouraged their husbands, and in the revolution, the fighters’ wives were the ones who stood firm against the problems. In the last couple of years of the fight for revolution, the role of women in the triumph of the Islamic revolution and the great upheaval of the people were noticed all of a sudden, and women initiated the first heroic demonstration and displayed their active and notable participation in the highly perilous combat zones.

In general, the value of mankind in the viewpoint of Imam Khomeini is defined through “humanity” which is emphasized by the Qur’an, too. The status and individuality of human beings as well as their rights of freedom have a structure which has been provided by the Islamic teachings and the brilliant commandments of Qur’an. Outside these holy borders, the human status of mankind is manipulated by the carnal desires of dishonest people, and it will not have a genuine definition and content anymore. Ayah 43 of surah Ale Imran reads: “O Maryam! Keep to obedience to your Lord and humble yourself, and bow down with those who bow.”

According to the great leader of the revolution, Fatimah and Zainab (peace be upon them) are two appropriate role models whom Muslim women should follow in every arena, since they are the two women in whom the human identity is manifested. They are the honor of the family of revelation and shine over the summit of Islam. Fatimah is a woman whose virtues are at the same level as the infinite virtues of the Prophet Muhammad and his descendants.

The woman whom many –with various viewpoints – have talked about but their words fell short on praising her. The lady of the World of Islam is a holy and spiritual woman and a true human being. She is the true face of humanity and the women. She is a divine and heavenly being who has appeared as a woman; a woman who has gathered all the characteristics of prophets within herself. She is the one who has commenced her spiritual journey from nature, and through the power of God and the training of the Prophet Muhammad, she has reached such a stance that no one can compete with her. This woman has been the purpose of the creation and the interpretation of “hayya ala khair al-amal” is referring to “doing good to her and her children”.

Regarding the status and greatness of women in Islam, Imam Khomeini has stated: “The prosperity and wretchedness of mankind depends on women since they are the educators of the human beings; women shape real human beings through their proper training, and all the happiness and good deeds originate from women.” He also adds: “If brave women are taken away from nations, the nations will succumb to defeat and decadence.”

The ten-year  superb leadership of Imam Khomeini caused the accessibility to his opinions to go beyond pure theories, and both the theories and the practical examples became available to everyone. This advantage makes Imam Khomeini’s thoughts superior to the thoughts of the other Muslim thinkers and connoisseurs. In a quick glance, the sublime measures of the social life of women can be identified in his point of view. It is quite surprising to see that the status of women is placed higher than men in this faith related arena.
In the Islamic point of view which emphasizes on the potential of women to develop themselves, participation of women in the social and political matters is not prohibited and it is a sign of maturity and faith; however, the participation of women requires some formalities. As Imam Khomeini has stated: “Today, women should perform their social and religious duties and maintain public modesty and accomplish political-social activities with respect to public modesty.”

Motherhood is the primary stance of women in the society and is responsible for the survival of the human societies. At this stand, women are considered at the same level with the prophets. This concept, unfortunately, has lost its true value in the material standpoint. The insight of Imam Khomeini examines the heart of the matters and explains them to common people with a simple rhetoric. In his point of view, women are in charge of the purification and constructiveness of the society.

The corruption of human societies –the western societies in particular- and lack of solidity in families, as well as not abiding with the moral principles, stem from ignoring the motherhood responsibilities. The happiness and the wretchedness of nations and countries have profound and genuine ties with the presence of women. A woman can be the origin of the happiness for a society and the blessings of her being can establish the endurance of a society. The opposite of this situation is true as well. Based on Imam Khomeini’s view, the fundamental role of women in the survival of societies has been greater than the role of men and he has expressed it beautifully in the following statements: “Men are producers of nations and women more so; and the appropriate structures of countries are built through the capable power of women.”

Contrary to some opinions, Hijab, or Islamic cover, protects women from inappropriate gazes and prevents their human personality and worth from being treated like a tradable good in the society. Under the protection of Hijab, the nobility and individuality of women is preserved. Imam Khomeini expresses his opinion in regards to Hijab and its role in the society: “Of course, the type of Hijab that Islam requires you to observe is to protect your values. What God has commanded, either for men or women, is to protect their true values from the satanic temptations which might be implemented on them by the expansionists. Hijab is for reviving these values.”

With regards to the role of women in the society, Imam Khomeini has said: “In the Islamic government, women along with men can actively contribute to the erection of an Islamic society as human beings and not as objects. Neither women are allowed to lessen themselves to a low stance nor do men have the right to think of them in that context.”

Source/Click here for the whole article