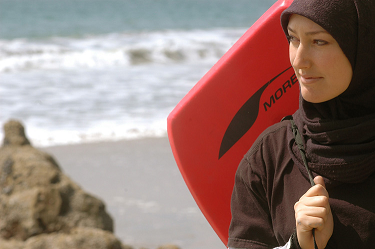 British Muslim women who wear the hijab feel generally better about their body image than those who don’t wear the hijab suggests research published in the British Journal of Psychology today.
The research, conducted by Dr Viren Swami from the University of Westminster and colleagues looked at body image issues amongst British Muslim women.
Dr Swami explained: “In the West anxiety about body image, for women, is so prevalent it’s considered normal. This study aimed to explore how these attitudes differ within a British Muslim community.”
A total of 587 Muslim women aged from 18 to 70 years from London participated in a number of tests. From this group 218 women stated they never used the hijab and 369 women said they used some form of the hijab at least now and then.
Participants undertook a number of questionnaires that asked them to rate their own feelings of body dissatisfaction, how much pressure the media put on them to be attractive and how religious they were. They were also asked to match their own figure to a set of female silhouette images that ranged from emaciated to obese.
The results showed that women who wore the hijab generally had a more positive body image, were less influenced by the media’s beauty ideals and placed less importance on appearance.
Dr Swami said: “Although the results showed only a small difference between those who wear or don’t wear the hijab it does suggest the hijab offers Muslim women a small protective effect in terms of feeling positive about their body image. It appears that those who choose to wear it are better able to distance themselves from the Western thin ideal.
“These results may have useful implications for intervention programmes aimed at promoting healthier body image among Muslim women in the West. For example, by identifying those aspects of hijab use that are associated with more positive body appreciation in future studies, it might be possible to isolate factors that can be targeted in intervention programmes.”
The journal, entitled “Is the Hijab Protective? An Investigation of Body Image and Related Constructs Among British Muslim Women”, can be accessed here.
The Society publishes 11 academic journal titles in conjunction with our publishing partner Wiley-Blackwell. The British Journal of Health Psychology publishes original research on all aspects of psychology related to health, health-related behaviour and illness across the lifespan. Visit the Wiley online library for more information.
—
Source: BPS