The Challenge Against Indifference 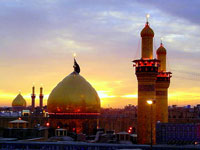 Through his supreme sacrifice, Imam Hussain (a) rejected the logic of indifference; he commanded the need for action, underscored human dignity and affirmed the God-granted gift of freedom

Among the greatest blessings bestowed to humanity are the related gifts of reason and freewill. Through these faculties, human beings are able to determine their choices, chart their destinies, transcend the narrow limitations of the ‘present’ and envisage a more perfect ‘future’. In their absence, terms like social justice and human perfection are rendered devoid of meaning—or at least curtailed in their significance.
It is of little surprise therefore, that the religion of Islam consistently emphasises human freewill and stresses on the vital role of the intellect. In a host of verses in the Holy Quran, one observes repeated expression of both these elements. This charter of reason and freewill arose in the midst of an oppressive historical context qualified by superstition, ignorance and suppression.
For instance, when discussing the universe and its wonders, Islam urges contemplation and reflection over the signs embedded in a balanced, purposeful and ordered system. In contrast, the Jahiliyyan worldview revolved around the vagaries of superstition according to which the universe was governed by strange creatures and demi-gods. On the social plane, Islam’s revolutionary message discarded the tribal yardsticks that buttressed a system that seethed with oppression. Islam asserted the equality of humanity and likened its members to the ‘teeth of a honeycomb’; any nebulous claims that justified social distinctions or discrimination had to be combatted in order for both individual and society to remain true to the Divine message.
Through word and deed, the Holy Prophet (s) gave the human being a status of intrinsic dignity that was fundamentally incompatible with the injustices of Makkan society—a society in which the value of an individual was contingent on the distinction of his/her tribe, or lack thereof.  One the other hand, Islam gave individuals a collective, universal identity based on core tenets and values. It released human beings from the fetters of resigned fatalism; it reversed the dominating paradigm from a narrow tribalism to a collective identity that introduced a universal—and indeed revolutionary—sense of responsibility.
Some decades after the death of the Holy Prophet (s), the Islamic community was plagued once more by an indifference that sapped its energies and imprisoned the individual to the whims of authority. The Prophetic saying: ‘he who wakes in the morning unconcerned about the affairs of other Muslims is not a Muslim’, which connected submission to Islam with vigilance, awareness and a striving activism was all but effaced from the psyche of the Ummah.
In this climate of docility, Imam Hussain (a) rose to spark the community out of its state of slumber. Through his resounding uprising, the icon of revolutionaries destroyed the foundations of an oppressive rule that sought to hide its monstrosities behind an adulterated interpretation of faith. It is interesting to note that the discourse adopted by the killers of the grandson of the Holy Prophet (s) was underpinned by a logic that reduced the individual to a mere spectator and plaything for those in power—of course, under the false façade of Divine will.
In the court of Kufah, Ibn Ziyad rebuked Muslim ibn Aqeel with the words: “O outlaw! You have seceded from your Imam and have sowed the seeds of discord among Muslims”, for his so-called acts of ‘instigation’. Before him, Muawiyah described the appointment of Yazid as “a destiny from among Divine destinies” and hence “no one [enjoyed] any volition” in the matter. One can trace the hallmarks of this line of reasoning in a number of theological schools that sprung up during the Umayyad era.
In this respect therefore, Karbala is a supreme restatement of the liberatory essence of Islam. Through his supreme sacrifice, Imam Hussain (a) rejected the logic of indifference; he commanded the need for action, underscored human dignity and affirmed the God-granted gift of freedom. A true Muslim could simply not choose to sit by in silence as oppression rampaged.
As we enter the month of spiritual and revolutionary struggle, it is crucial that we scrutinise our individual selves and societies. Knowingly or not, we often succumb to a defeatist rationality that allows an unhealthy climate of indifference to foster. One cannot over-emphasise the crucial role of Islamic lecturers, educators and organisations in this regard. It is not sufficient for centres and mosques to be passive receptacles for traditional gatherings; rather, their proper role is to infuse a confident, self-aware and dynamic identity to individuals and communities.
In connection, this year’s Muharram commemorations will be coupled with a nationwide Ashura Awareness Week campaign during which, each and every individual has the choice of standing up as an emissary of the message of Karbala. Such initiatives are critical in order to enliven the beating pulse of the community. The logic of the Holy Quran is clear: faith must be coupled with righteous action. To combat indifference, lip-service is not sufficient; words must be augmented with concrete action.
—
Ali Jawad is a member of the AhlulBayt Islamic Mission (AIM).
Source: AIMISLAM
Donate Now
© 2003 - 2022 - Ahlulbayt Islamic Mission (AIM)