The Magnificence of Lady Fatimah [pbuh] 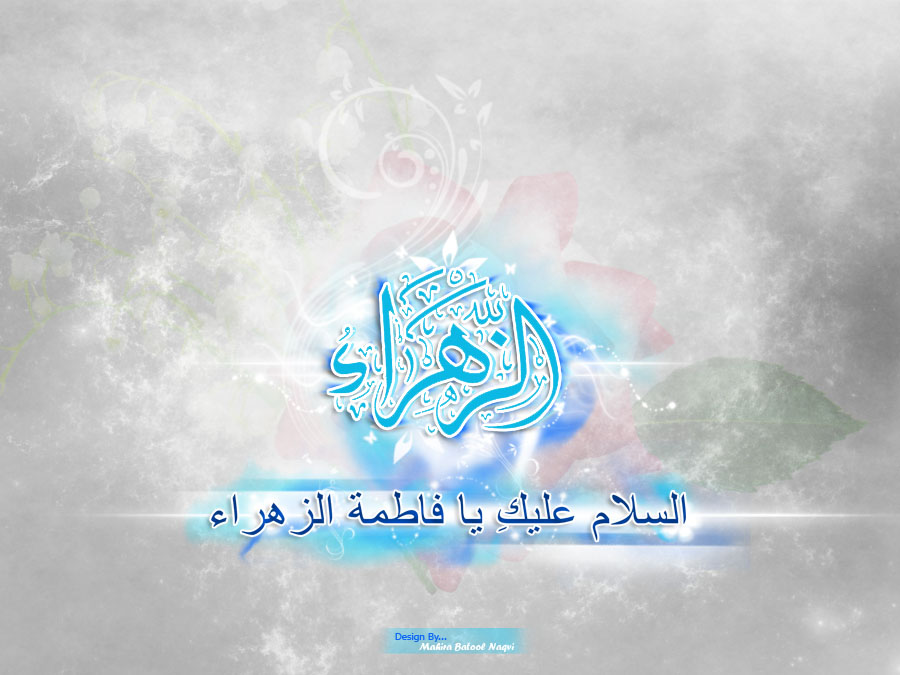 By Ayatullah Sayyid Ali Khamenei
According to the predominant [historical] accounts, the noble daughter of the Prophet [p] was born in the fifth year preceding the biʿthah1. Therefore, the age of Faṭimah al-Zahrāʾ (upon whom be peace [p]) at martyrdom would be eighteen years. It is also mentioned that the birth of this noble lady was during the first or second year of the biʿthah, thus making her maximum age-span either twenty two or twenty three years. If you were to consider all the barriers that could [possibly] surround a woman (especially in that era, when the barriers were greater), you will realize the magnificence that noble lady had established in such circumstances and within a brief age span.
Of course, I cannot speak about the spiritual, metaphysical, and divine aspects of this noble lady, for I am incapable of comprehending those matters; even if an individual were able to comprehend them, he would be incapable of describing and elucidating them in their totality. These spiritual aspects [constitute] another dimension [entirely]. Moreover, it has been related by Imām al-Ṣādiq [p] that, ‘Fāṭimah was muḥaddathah,‘ meaning that the angels would descend upon her, communicate with her and enjoy her company. There are numerous narrations related to this matter. The [belief] that she was muḥaddathah is not confined to the Shīʿa alone. Rather, both Shīʿa and Sunnah believe that there existed, or possibly [existed], individuals during the early Islamic era who could communicate with the angels. The manifestation of those individuals in our narrations is Fāṭimah al-Zahrāʾ [p]. It is mentioned in the aforementioned narration that the angels would come to Fāṭimah al-Zahrāʾ [p], speak to her, and recite the verses of God (āyātullah) to her. Just as there is an expression in the Qurʿān concerning Mary [p], in the following verse:
“إِنَّ الله اصْطَفَاكِ وَطَهَّرَكِ وَاصْطَفَاكِ عَلَى نِسَاء الْعَالَمِينَ”
“Allah has chosen you and purified you, and He has chosen you above the world’s women.” [3:42]
The angels used to address Fāṭimah al-Zahrāʾ [p] by saying, ‘O Fāṭimah, God has chosen you and purified you, and He has chosen you above the world’s women.‘
These spiritual characteristics are deeply related to the practical virtues which reflect the exertion of Fāṭimah al-Zahrāʾ [p] in this regard. This [spiritual] status is not granted free of cost nor without a reason, for the act of the human has an immense effect on gaining virtues and spiritual merits.
[Fāṭimah was] the girl who was born amidst the flames of the Prophet’s bitter struggle (jihād) in Mecca, and who supported and consoled her father at Shuʿb Abī Ṭālib2. She was a girl of seven or eight years of age – maybe more or less by a few years (depending on the varying [historical] accounts), and yet she endured those circumstances. Who was there to remove the anguish from her in those circumstances? Khadījah and Abū Ṭālib [had] passed away, and the Prophet was alone, without [any source of] solace. In addition to hunger, the three years at Shuʿb Abī Ṭālib was also characterized by thirst, cold, and heat. These were difficult years of the Prophet’s life; during this time, a number of Muslims lived on a mountain in a state of forced exile. In those circumstances, this girl endured these hardships. She was like a savior to the Prophet; a mother to her father, and an eminent nurse for that profound person. She consoled the Prophet [p], endured pain, worshiped God, enhanced her faith, disciplined her soul, and opened her heart to Divine light and knowledge. These are the factors that cause an individual to reach perfection.
Following the hijrah3 – and during the initial years of taklīf4 – Faṭimah al-Zahrāʾ [p] married Ali bin Abi Taleb [p]. Everyone knows the simplicity and condition of poverty that Faṭimah al-Zahrāʾ [p] experienced after marriage while she was the daughter of the premier of the Islamic world and the governor over [Muslim] people.
One becomes greatly bewildered when contemplating and pondering over the status of the pure Zahrāʾ [upon whom be peace]. The bewilderment does not result from wondering how this individual was able to reach such a status of spiritual and physical perfections during the age of youth – though this fact is also bewildering! Rather, [one is astonished] at the how Islam was able to, through its superior nurturing, enable a young woman to obtain such an esteemed stature in those difficult circumstances. The magnificence of this being – this honorable individual – elicits astonishment and bewilderment. Similarly, [one cannot help but be in awe at] the magnificence of the Message [of Islam], which forged a being of such high stature and honor.

The life of Faṭimah al-Zahrāʾ [p], in all its dimensions, was filled with action, pursuit, spiritual sublimity, and perfection. Her young husband was always at the war front, and the troubles of life and the surroundings made her a referal to which Muslims and people appeal. The girl who was the appointee of the Prophet [p] spent her life with utmost patience during those circumstances. She raised her children (Hasan, Husayn, and Zaynab), assisted her husband Ali [p], and gained the pleasure of her father, the Prophet [p]. When the [Islamic] conquests and [gaining of] the spoils [of war] first began, the daughter of the Prophet [p] did not take a speck of worldly pleasures, ornaments, or the outward beauties and commodities that the hearts of young ladies and women are [so often] inclined to.
The worship of Faṭimah al-Zahrāʾ [p] was exemplary. Hasan al-Baṣrī, one of the [devoted] worshipers and ascetics in the Islamic world, says in regard to Faṭimah al-Zahrāʾ [p]: “The daughter of the Prophet [p] worshiped God and stood in the miḥrāb of worship to a degree that her feet swelled.” Imam al-Ḥasan al-Mujtabah [p] says that his mother stood [in] worship to God during one night until the morning (dawn). Furthermore, Imam al-Ḥasan [p] said that he always heard her praying for the believers, the people, and the general problems of the Islamic nation, [so] he asked her when morning came, “O mother, why do you not pray for yourself just as you pray for others?” whereto she replied, “O son, the neighbor is given precedence over [one’s] house.”
The struggle of this noble lady in various fields is exemplary; in defending Islam, Imamate and Wilayah (Divine vicegerency); in defending the Prophet [p]; In companionship with the greatest Islamic leader, the Commander of the Faithful [Ali] whom was her husband. The Commander of the Faithful [p] once said in regard to Faṭimah al-Zahrāʾ [p], “She never [once] angered me nor did she disobey me.” Being as grand and majestic as she was, Faṭimah al-Zahrāʾ [p] was a wife in her house, a woman as Islam conceives, and an esteemed scholar in the [vast] ocean of knowledge. ʿAllāmah al-Majlisī says in regard to the speech which she gave in the Masjid of Medina after the departure of the Prophet [p]: “The profound scholars and experts of eloquence and rhetoric should sit down and elucidate the words and phrases of this speech,” for this is the extent of its value. As for [the speech’s] technical/artistic beauty, it is similar to the most beautiful and esteemed words [found] in Nahjul Balāghah5, and of the same [lofty] standard as The Commander of Believer [p]’s words. Faṭimah al-Zahrāʾ [p] went and stood in the Masjid of Medina and [gave an] improvised [speech] before the public for about a whole hour; [expressing] the best and most beautiful phrases [with the most] sincere meanings. This was her worship, eloquence, rhetoric, wisdom, knowledge, understanding, struggle, and conduct as a wife and mother. Moreover, [we must admire] her beneficence towards the poor. One time, the Prophet [p] sent an old poor man to the house of The Commander of the Faithful [p] and instructed him to tell them what he needs.. Faṭimah al-Zahrāʾ [p] gave him a [piece of] leather that al-Hasan and al-Husayn would sleep on, as she had nothing else [in her possession]. She instructed him to take it, sell it, and live off of its provision. This is the character of Faṭimah al-Zahrāʾ [p], which is comprehensive in all aspects. Indeed, she is an example for the Muslim woman [to follow].
________________________________________
[1] The year which prophet Muhammad [p] was sent to the people with the Message from God.
[2] A location in Mecca where the Prophet (p) and a number of Muslims remained in exile for approximately three years.
[3] The year of prophet Muhammad [p]’s migration from Mecca to Medina which counts as the first year of the Islamic Calender.
[4] Jurisprudential puberty whereat the individual becomes responsible towards God for performing the legislated and ordained duties prescribed by religion.
[5] A book which consists of compiled speeches and wisdoms attributed to the Commander of the Faithful Ali [p].  It is translated into English under the title of “The Peak of Eloquence.”
—-
Source: Shia Translation