The Martyr will free you

Every act of the human being has a spiritual reality to it. All your decisions leave an impression on your soul. Narrations tell us that when we sin, a black dot appears on our hearts and when we partake in good deeds, a white dot appears. If we sin too much, soon our heart will become completely engulfed in darkness and we will blinded by this wold. This is the constant battle of good and evil within us. And these dots appear through our actions, even actions which are permissible for us as Muslims leave a their mark. Every experience of pleasure, whether food drink or intimacy with a spouse, creates an impression in the soul and may increase the love for that activity. The more pleasures and luxuries the soul experiences the more it gets used to it, and so its love and attachment to this world begins to grow. And the more the soul is directed towards this world, the more it leans away from God. Soon a complete materialistic world view forms, and he becomes a person of the earth.

On the other hand if someone has a bad experience of something he begins to resent it. It leaves a bad impression on the soul. The stronger the impression the greater the ill feelings towards that thing will be. Let’s use the example of you moving to another city – once you move there imagine you faced all kinds of loneliness and hardships. The harder it is to live there the more you will dislike it, and if there is a better city you would want to go there. You will want to escape the bitter taste of the city you are in. If you are unable to make the journey away from the city, then you will send your heart to the place it desires. Apply this to this world, and you will see that these tribulations are designed to make you leave this world. Don’t be attached to it. Your longing would then urge you to want to go to a better place, of peace and tranquillity. You will distrust this world eventually, and you will resent it. You will not be able to leave this world, but your heart will be sent elsewhere, to that place of peace.

RasoolAllah (S) is narrated to have said that the ‘love of this world is the head of every wrong’. It is the source of all evil. It would make sense then that when God loves someone he would want to turn him away from this world out of his mercy through these hardships which will purify him. You would turn away in disgust from this world and turn your heart to God. Don’t you notice in difficult times that you remember God evermore?

Indeed God has so little regard for the unbeliever that should he ask of Him the world and that which is in it, He would give that to him.” – Imam Sadiq (as)

Compare that to the hadith of when Gabriel came down with the keys to the world and all that is within it and offered it to the Prophet (S) and told him if he accepts it nothing would diminish from his hereafter, but the Prophet (S) refused it out of his humility to God and chose poverty. He did that because in his eyes, this dunya has nothing to offer. It is worthless. Why would he trouble himself with it?

This world is not the place of punishment and reward. The oppressors oppress, and the rightful stand firm in justice; this is the zone of trial. The hereafter is when we will be judged and this world is where we will be separated for that judgement. The Prophets suffered the most in history – look at how the people of God suffered throughout their journeys. One who is closer to God – it is true – will suffer more out of his love for him. Your suffering is determined by your faith. The suffering is the separation.

The closer one comes to God, the more hardships he will encounter in his life. Everything comes at a price, as does love. If you fear an increase in your love of God will bring you more hardship to take you away from this world then that’s okay, stay there, you have come to your limit and at least you know it. But for those asking always for the higher levels with the Beloved…. Know that the price you pay for this love could range from the loss of all your wealth to your closest loved ones, such is the path of the lovers. Such is the path of Muhammad (S), Ali (as), and Hussain (as). If you’re ready to love despite all consequences, then love with all your heart.

The world is suffering greatly, and it needs the people of love more than ever. People are losing their lives all over the globe, and their families’ resolves are being tested. The people of love have stepped up to ignite us.  Mahmood, who we called Houda, lost his life in the Beirut bombing on Thursday leaving his family in utter pain, as all the innocent lives lost in recent days have done around the world. In the July 2006 war in Lebanon, my family and I fled to the mountains where we stayed with families we hadn’t met before, but became one family under the night sky which would light up over Israeli bombings. Many of us thought we wouldn’t live past those days. It was then that I met Houda. He was the life of the gathering every day and night, he would be so calm about everything that was happening. He was 17 years old then, I was 15. I remember how we would walk around the village early in the morning as he would make me laugh to my stomach and forget there was even a war going on.

Houda and I lived past that experience. Our families survived the war and we lived on, safe. 9 years later, on that fateful Thursday night, Houda was delivering some food to people in Beirut right where and when the bomb exploded and took his life. My heart sunk whilst looking through his pictures and remembering dear memories. I watched as they applied the dirt over his grave. I saw his mother saying her final words to her son. His wife to be sat by his grave, holding a picture of his face, her tears strolling down her cheeks – they were meant to marry this summer. His family are now to be tested as people of love; their hearts are now ready to leave this world so that they may be in union with their loved one. Houda’s martyrdom freed him from this dunya, and will spark the fires of freedom within the hearts of the people who remember and love him. Let your heart go to where he is.

He now goes to where Asiya, the Pharoahs wife would always desire so desperately to go. She could have had anything she wanted as she stood by the most powerful man in the world. But she refused it all. Instead of her castle, her palace, she asked God for one thing:

‘bayt’ was the word used in Arabic for house, but it doesn’t mean the houses we know. Bayt refers to a simple small room, a small home. Asiya asked for a small room rather than having the entire Egyptian empire at her fingertips – as long as that small room was near Him. With Him.

Houda, you were the survivor. The happy one. The one who made us smile. Our memories are engraved deep in my heart. I hope to see you again one day, and just like you would walk me around the village to calm me down, I ask you to walk with me on the Sirat on the day of judgement to calm me down then too. You’re a martyr now Houda, congratulations on your martyrdom old friend, may God give your family patience. May God give your mother patience. 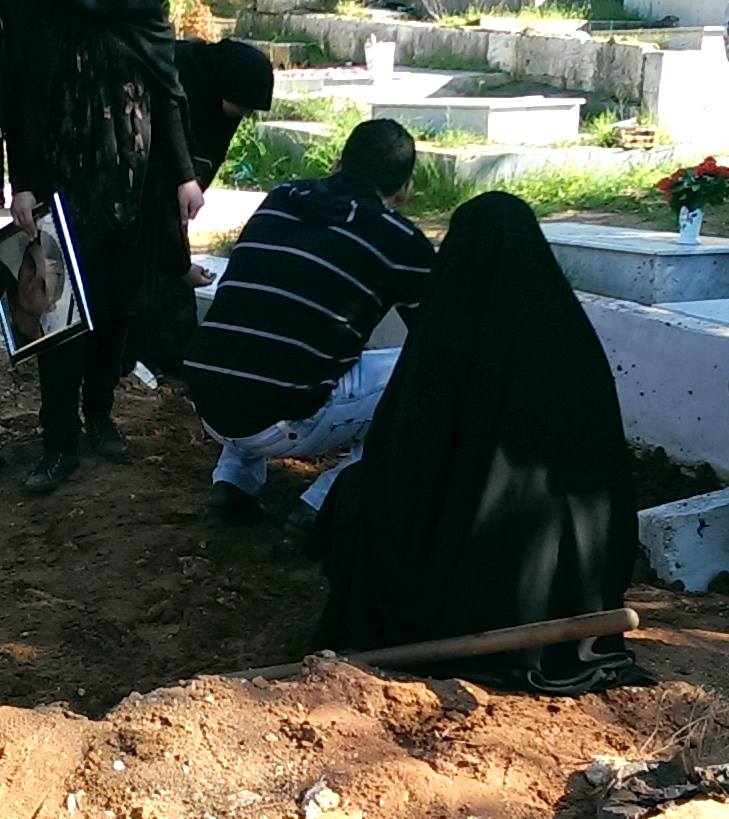 Houda who lost his life in the Beirut bombing, was lowered into his final resting place. The woman standing over the dirt that covers him and holding his picture was his wife to be – they were supposed to marry this coming summer.