The Signs of a Person With Character 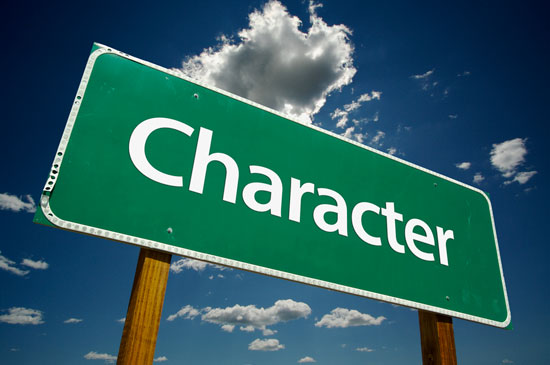 [Imam Ja’far b. Muhammad] as-Sadiq (as) has said: “There are three things which show the character of a person: good etiquette; swallowing one’s anger and lowering the eyes [to that which one is not permitted to look at].”1
The word “كرم” in sometimes used in the ‘Arabic language to refer to the traits of munificence, charity, and generosity. In the verses of the Qur`an and the traditions, it refers to the character or temperament and the spiritual worth of a person. For example it has been mentioned in the Qur`an that:

“Surely the one with the most character, worth, noblest of traits and ethical values amongst you in the sight of Allah is the one who is the most Allah-Conscious (one with Taqwa).”
According to the tradition we started our discussion with, the person with character is the one who possesses the following three traits:
1. A good demeanour: Having pleasant encounters with others, enjoyable to be around and observing the proper etiquette are all things that come under the heading of a good demeanour. In addition, these are things which have been emphasized in the verses of the Qur`an and the traditions, and one of the miracles of the Prophet (S) was his good demeanour and etiquette.
If a person with character is given something or has something taken away from him, he does not let this get to him and is able to control himself. However, as can be seen in a person who has no character or has a negative disposition, even if a small amount of difficulties abound him, he becomes childlike and immature and begins to argue with everyone!
2. Swallowing the Anger: The word “كظم” refers to closing the mouth, as anger is like a fire raging inside a person which is manifest when one speaks. It engulfs the one who is in his presence and is at the receiving end of the anger and it is for this reason that the word “كظم” has been used for ‘anger’ and the act of swallowing one’s anger is one of the traits of a person with character. Of course there is also a form of ‘sacred anger’ and this is necessary to have.
3. Lowering the Eyes [to that which a person should not be looking at]. The word “غمص” refers to closing one’s eyes, however the word “غضّ” is in the meaning of lowering the gaze and look.
What must we lower our eyes from? The meaning of lower one’s eyes or refraining from looking at certain things has a very wide meaning to it:
1.       Refraining from staring at people whom one is not related to by blood or marriage (Maharim);
2.       Turning a blind eye to the shortcomings of the people;
3.       Turning a blind eye to the minor mistakes of the people;
4.       Abd refraining from staring and desiring the gold and glitter of the transient world.
We pray that we can all struggle to enliven these characteristics within ourselves and pray that Allah (SWT) gives us the Divine providence to be able to possess these traits!
—–
Source: Al-Islam.org