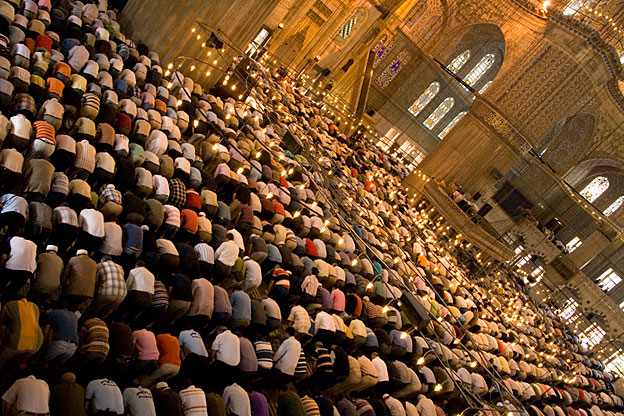 Interview with Shiekh Salim Yusufali on the significance of the blessed months of Rajab, Sha’ban, and Ramadan.
1) Why are the three Islamic months of Rajab, Sha’ban, and Ramadhan considered as the “spiritual season?”
Allah has created the physical universe in a way that throughout the year, we typically experience different seasons. Each of these seasons has its own particularities; in one time of the year, He wishes for it to be cold and dark, while at another times, He showers the land with rain and displays His blessings in the form of spring beauty. The change of seasons is Allah’s will and reflects Divine wisdom in creation and is beyond our control. However, if we know what each season holds in stake for us and prepare accordingly, our worldly experience will be better.
The Qur’an and the Ahl al-Bayt (a) have taught us that in the same way the seasons differ from each other in the physical world, such is the case when it comes to our ability to receive special blessings from the spiritual world during different time periods in the Islamic calendar. Among the most important time periods throughout the year to strengthen our connection with Allah lies ahead of us in the months of Rajab, Sha`ban, and Ramadhan.
In a tradition, we are told that the month of Ramadhan is “springtime for those who are needy.” [1] Just as one might prepare during the latter part of winter for the upcoming spring by doing spring cleaning, those who want to truly benefit on a spiritual level from the month of Ramadhan ought to make the most of the months of Rajab and Sha`ban. In one of his poems, the renowned poet Hafez, states: “Drink for three months and be abstinent for nine!” ‘Drinking’ is a word that such mystical poets would use to describe one’s awareness of Allah and his/her responsibilities to Him. Scholars have interpreted Hafez’s words to mean that if one is particularly aware of his responsibilities to Allah during the months of Rajab, Sha`ban, and Ramadhan, then he/she will be able to reap the benefits of having done so throughout the rest of the year.
2) What are some recommended acts we can do during Rajab and Sha’ban?
Before mentioning recommended acts, it’s important to remind ourselves of the importance of our obligations to Allah. We often think of the Shaytan as deceiving us by inviting us towards sin, but doing so is not his only tactic. Sometimes he attacks us by calling us towards recommended acts that can lull us into a false sense of spirituality and make us heedless of important duties we are neglecting because they may be less appealing to our nafs. Amir al-Mu’mineen (a) states: “There is no proximity to be attained through recommended acts when they negatively affect the obligatory acts.” [2]
Having said that, the months of Rajab and Sha`ban offer tremendous opportunities to achieve spiritual proximity by means of special a`amal (acts) that the Ahl al-Bayt (a) have taught us. Performing these acts can help give us determination to fulfill our obligations, and they are a means of watering the seeds that are planted through performing obligatory acts. These acts have been compiled in books of a`amal such as Sayyid ibn Tawoos’ Iqbal al-a`Amal and Shaykh Abbas Qummi’s Miftah al-Jinan. Among them are the following:
Rajab-

3) Why is it important to take advantage of the time we have during these special months?
The arrival of these months is filled with opportunity, and we ought to seize the moment; but as Imam Ali (a) puts it, “Opportunity passes away quickly the way clouds pass.” If we know of the potential of this month yet don’t make the most it, Allah only knows whether we will be alive to take advantage of these months next year, and if we are alive, whether we will have the motivation and ability to take advantage of them.
4) Prophet Muhammad (s) has stated in a tradition: “Rajab is Allah’s month, Sha’ban is my month, and Ramadhan is the month of my Ummah.” Can you give us insight into what this means?
In one sense, all three months are Allah’s months, the Prophet’s months, and the months of the Ummah. And in some traditions we are told, for example, that Ramadhan is the month of Allah, and that Rajab and Sha`ban are the months of the Prophet. When the Ahl al-Bayt (a) give special associations to the months as described in the quoted tradition and others, they are describing the reality of the spiritual universe as has been unveiled for them. Perhaps we can understand some of what they mean by looking at some of the traditions regarding these months. The month of Rajab is a month where Allah pours down His blessings and it offers unique opportunities to remember Him, and perhaps this is why it is His month. Sha`ban is a month that the Prophet (s) was particularly fond of, and he would perform special acts during this month. The month of Ramadhan is a special occasion for the entire Ummah, and it has a well known place within the Islamic culture.
5) What is the relationship between these special months and the Imam of our time (a)?
The Imam of our time (a) is the Hujjah of Allah upon the earth, and the channel through which Allah dispenses all of His grace upon us; therefore, we should know that any opportunities and blessings we are gifted with during these months are directed our way from the Imam of our time (a). Keeping this in mind as we go about our daily activities will help strengthen love of the Imam (a) in our hearts.
Also, the Imam (a) is our guide and exemplar. We can be sure that he, too, is performing special acts during these months, and at least a couple of the du’a and ziyarat we are instructed to recite during this month are narrated from him.
The 15th of the month of Sha`ban marks the birthday anniversary of the Imam (a), and is an opportunity for us to celebrate his blessed presence and remind ourselves of the responsibilities we have towards him.
6) There are ahadith that talk a lot about how fasting during these months guarantees a believer heaven. For example, the Prophet (s) has said: “Shaban is a month dedicated to me. Whoever keeps one fast during my month will definitely go to heaven.” Imam al-Kadhim (a) has said: “Rajab is the name of a river in heaven, which is whiter than milk and sweeter than honey. Whoever fasts in Rajab shall be able to drink from that river.” So why is fasting in particular so important during these months? Why is heaven guaranteed?
There are numerous traditions regarding the merits of fasting during these months, and some days among these are particularly emphasized, such as the 27th of Rajab and Thursdays in the month of Sha`ban.  Some points to keep in mind:
Heaven “being guaranteed” may refer to the tremendous reward associated with this act, when it is performed in the most perfect form. It does not, however, negate the possibility that this reward can be destroyed through future sins, nor does it relieve us of the obligation of repenting for past sins.
According to a tradition of the Prophet (s), one who is not able to fast for a particular day in the month of Rajab, but wishes to receive the reward associated with fasting for that day, can alternately recite the following tasbeeh 100 times:

One of the urafa of contemporary times would recommend to his married students that whenever they keep recommended fasts, they should do so in companionship with their spouses. If their spouses were not keen on fasting or not able to do so, they would not do so either; because after all, one who fasts tends to disrupt the normal routine at home, and this can create unnecessary trouble for others. There is much insight to be gained from his wise words.
7) There are numerous amounts of recommended a’mal to do during Rajab, Sha’ban, and the month of Ramadhan. What are some practical ways to organize oneself to do as much as they can? Should we focus on any particular duas/a’mal more than others?
Some of the particularly emphasized acts for Rajab and Sha’ban have been mentioned above.  We should also keep in mind the tradition from Imam Ali (a):  “A little that one performs consistently is better than a lot which tires him out.” The serious seeker should be looking to consult with one who has expertise in such matters to determine the best spiritual program for him/herself. Such a program will ensure that whatever gains are made in this time period are reflected even beyond in the form of enhanced taqwa.
[1] Wasail al-Shiah v. 10 p. 318
[2] Nahj al-Balagha Epithet 39
—————————–
Source: Elhaam.org