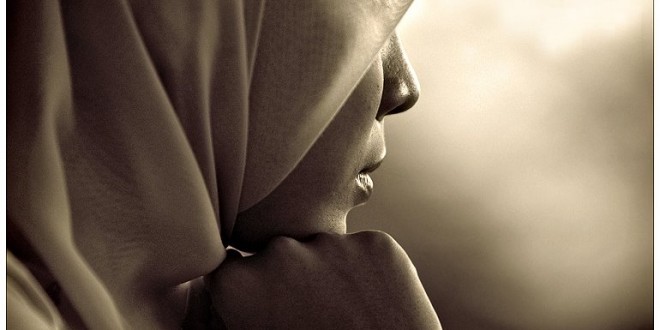 Hijab: A single word which has become enough to cause controversy, havoc and an eruption of emotions within us.

The Struggles of a ‘Towel Head’

I felt compelled to write this after attending a discussion recently, whereby one of the topics were whether men should be allowed to advise women on hijab. It gradually became more heated and it was interesting to hear the views from both sides. One comment, however, struck me. It was a rhetorical and somewhat patronising question posed to the sisters about what struggles exactly do we face. I agree that in comparison to our sisters in France and other countries, in which keeping a simple scarf on your head is a daily battle, that the problems us “hijabis” face here are not as dramatic. However, that does not eliminate the obstacles that we are constantly tackling in order to maintain decent hijab here in London. Some get it easier than others but I for one suffered and fought to keep it on & so the comment saddened me and for once, completely silenced me.

I come from a very religious background but my parents raised me and my 4 sisters as individual thinkers and gave us the freedom to understand what was right and wrong. My father would talk to us gently about the hijab and I found myself too eager to wait and wear it at the age of 9. The day I walked into school with a white headscarf on was the day that I coincidently lost almost over a half of my friends. As a child, I was confused and upset. I sat down in class & a girl asked me “Has your dad shaved your hair off because you’ve been naughty? Is that why you’re wearing a towel on your head?”. I was pestered for wearing it and as well as that, they all thought that my incredible & understanding father was an oppressor. I couldn’t decide which saddened me more at the time. I’d come home crying and my parents would remind me of how brave I was being and how happy my grandmother Fatima Al-Zahra (as) was of me. That meant the world to me so I persevered, but it only got worse. Weeks went by and the bullying continued.

It was almost too much on my 10th birthday when a boy pulled off my hijab in front of the male teachers and ran off. I tried to chase him but he pushed me and that point, I just curled up into a ball and cried. His parents apologised to mine but it didn’t stop him doing it a second time. At 11 years old, it was also pulled off my head by a girl in my class. What was more astonishing was that when I chose not to cry this time and instead complained to the head teacher with all confidence, I was called disrespectful for accusing the girl of being a racist. Swimming classes soon started and out of my own will, I chose to stay in another class every week while mine went to swim. The teachers sat me down every time and asked me the same questions, “Is your father forcing you out of it?”, “You do know that he’s stealing your childhood from you?”. The consistent bullying was from the elders too and I as much as I tried to tell them that I chose not to attend because of my religion, they still thought I was a liar and an abused child. In conclusion, primary school was hell for me but by the end of it, I found myself replying to those teachers and children with all courage because although I suffered, I swear to God, there was a force that kept me going and injected me with strength.

I entered secondary school with an attitude towards my hijab that nobody could challenge. Those obstacles that I tackled at such a young age had a huge impact on my personality and made me a very confident and opinionated teenager.  The school that I attended had a high population of Muslims and so wearing it was easy Alhamdulillah. Most of the staff, not all, were understanding and didn’t challenge my views like they were at primary school. Soon, I was at college and the doors to a whole new world were opened to me. I chose to wear an Abaya in those 2 years to push myself to improve. The challenges I faced there were of a completely different sort. Seeing some of the hijab styles around me led me constantly fighting the voice of the devil within me. It was so attractive at times and tempting to try out. Summertime would come & there were half-naked students at every angle. That’s when the eyes were on me the most and I experienced the Jihad of hijab. One girl turned around and asked in a very loud voice in class once “Narjis, aren’t you hot in that!?”. I turned to her and smiled because my hijab truly protected me at college. There was this great amount of respect that I received from the non-Muslim male students at college and I cherished that because I felt that I was doing it the proper way.

Now most guys say that they don’t really know of the difficulties hijabis face but I’ll give you an idea of what we are challenged with daily. When we wake up in the morning to get dressed and leave, we ask ourselves a million questions such as, “Are those jeans wide enough?”, “Is my dress long enough?”, “Is my Abaya going to show my body if it gets windy?”, “Is my Shela (scarf) too colourful?”, “Can you see my figure in this?”, “Is my perfume too strong?” and so on. Yes, it gets tiring and I often find myself going back and forth and starting over. After finally deciding on what is appropriate, we head off. Sitting on the Tube or the bus, we are constantly pulling down our dresses or Abayas, adjusting our scarves, pulling down on our sleeves, hiding any loose hairs etc. Once we leave, we have to constantly monitor our behaviour and think before any action, something you may argue that every Muslim must do. However, with the Hijab on, we are placed in the front line in terms of representing Islam. Speaking in a proper manner, not laughing aloud and walking with a friendly yet stern face – all things we aim to do in public.

Another issue which has become less of a problem as years pass is the bearing of racist remarks thrown at us, such as the infamous “towel head”, “terrorist”, “immigrant”, “Paki”, you name it. This is more apparent outside of London but it still hurts when we have to encounter such people and hard to tolerate. It can literally affect your entire mood for the day unless you force yourself to ignore them eventually. There is also a demonic inner voice which tries to steer us away from the right path & seems to get louder when the sun is out. We see women walking freely in their short dresses & their hair out whilst were contemplating on how good it must feel to go out like that. Trust me, it’s tough. But, we remind ourselves of how much this hijab is only doing us a service by protecting us from the eyes of lusty men and out way of demanding respect from the world.

In conclusion, to say that the hijab is easy and that we face no or little challenges is quite an unrealistic and unfair statement to make. There are pressures from all angles and we’re fighting ourselves before anyone to maintain this Islamic dress code. I believe that I speak on behalf of all the Muslim sisters when I say that the hijab is somewhat difficult. That being said, when the passion for it is there, it’s strong. Once you have completely grasped the meaning of the hijab and practise it, you develop an immense love for it, despite the hardships that come with it here in the West.

Also, in these past few months or so, there has been much focus and negative attention on the hijab here in the West within the Muslim & non-Muslim communities. The notion of adopting the Islamic dress code is being criticised and jeered upon even by those from us and within us. We’ve witnessed a revolution in the hijab & an unacceptable manipulation of it. Even worse, we’ve witnessed this saddening phenomenon of Muslim girls taking off their hijab completely. Unfortunately, our judgemental communities have done little to defeat this and deal with the problem. You find that the approach many brothers and sisters use is an aggressive one and puts a halt to any progress or improvements in hijab. If you genuinely seek the betterment of your Muslim sisters, then understand that when you attack them, it’s only natural for them to retaliate or defend themselves, even if what is being said by you is true. Consequently, people see useless and embarrassing debates all over Twitter or Facebook about how haram skinny jeans are & how aggressive guys are being. Don’t get me wrong, I don’t agree with the complete modern transformation of the hijab today. But remember, every time you make such a remark publically that the entire world can see it, not just the sister you’re aiming to guide. How does that make Islam look? Suppose there was an open-minded non-Muslim that was curious about the Hijab but then saw the tweets under the #Hijab trend? Wouldn’t that deter them from reading further if there is such negativity coming from Muslims about it? Think about the positive impact that an encouraging Hijab tweet could cause as opposed to such a negative remark. Also, whatever happened to giving your brother 70 excuses? And, if you cannot find an excuse for him, look for some flaw in your perception? Assume that sister with the poor hijab has just joined the religion of Islam, just started wearing the hijab, is the only hijabi in her entire family or simply does not know how to wear it the proper way. If you honestly desire their guidance then do it the right way! Public humiliation is never the way forward.

Beginning to adopt the hijab is an enormous, important and life-changing stage in a woman’s life. We are in a constant state of worship & Allah (SWT) has truly preserved us by gifting us with the hijab. Let’s salute our sisters for wearing it when the influences of Western fashion are ever increasing. There has been too much negativity surrounding this issue and were running out of time. Are we waiting for more sisters to take it off completely? Yes, the hijab we are seeing is FAR from perfect or even adequate and sometimes even quite distressing. But, it’s up to all of us to change this and move towards adopting the hijab, both the female and male, which would please Allah (SWT). This can easily be done by altering our attitudes and working towards progress together. We need more events for the encouragement and the improvement of the hijab and less abusive attitudes. We need more self-improvement workshops and less Twitter debates. Slowly but surely, we will achieve change.

A Shawl of Diamonds, lowered from paradise, on my head you proudly rest.

“You deserve the Paradise; don’t sell yourself for anything less”.

You are my Hijab, my Crown of Liberty.