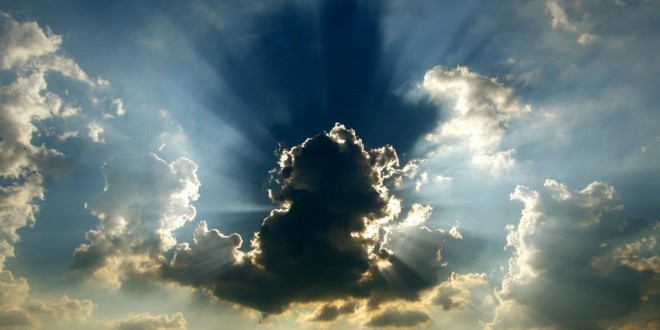 The Sun Behind the Clouds

Al-’Allama al-Majlisi ’s Thoughts on the Ahadith Identifying the Twelfth Imam as “The Sun Behind the Clouds”.

One of the common narrations relayed to convey the role of Imam Mahdi (AS) during his occultation is the analogy of the ‘Sun behind the Clouds’. In this text, Allamah Majlisi sheds the light on this tradition and provides key points to explain the meaning and significance of the meaning behind this similitude.

In what follows, is a sample of traditions, which compare the Twelfth Imam (a) to the sun behind the clouds during the period of his occultation. Thereafter, follows the commentary on these traditions by al-’Allama al-Majlisi.

• Imam al-Sadiq (as) is attributed to have said the following, as reported in the Amali of Shaykh al-Saduq, who records the tradition by means of a chain that terminates at al-A’mash: ‘the earth has not been devoid of a representative of God, since God created Adam (as); a representative that was either visible and well-known or invisible and concealed.

• The following tradition is reported in the book al-Ihtijaj from Shaykh al- Kulayni who in turn reports from Ishaq bin Ya’qub, that a message arrived for him from the Sacred Precinct through the intermediary of Muhammad bin ‘Uthman, which said: ‘As for the reason for the occurrence of the concealment, God, the Exalted, the Majestic says:

You who believe, do not ask about matters which, if made known to you, might make things difficult for you…‛ (5:101)

All my forefathers had to bear the burden of the pledge of allegiance to the tyrants of their time, however when I will rise, whenever that will be, there will not be the pledge of allegiance of any of the tyrants on myself. As for the question of benefiting from me, during my concealment, then that will be similar to the benefit obtained from the sun when the clouds hide it from sight. Indeed, I am the security for the inhabitants of the earth just as the stars are a security for the inhabitants of the heavens.

So refrain from questioning regarding that which does not concern you. Do not burden yourself with that which has been made sufficient for you; (instead) increase the supplication for the hastening of the relief for in that lies your relief. Peace be on you Ishaq bin Ya’qub and on those who follow the guidance’.2

• The following tradition is recorded in the book Ikmal al-Din wa Itmam al- Ni’ma of Shaykh al-Saduq with a chain that ends at the companion of the Prophet, Jabir bin ‘Abdillah al-Ansari who asked the Prophet (saw) as follows: ‘will the Shi’a benefit from the Qa’im (as) during his concealment?’ He replied: ‘Indeed! By the One who charged me with the office of Prophethood, they will benefit from him and be enlightened by his light and guardianship during his concealment just as mankind benefits from the sun even when the clouds have enveloped it’.3

Al-’Allama Muhammad Baqir al-Majlisi comments on these traditions as follows:

The similitude of the Imam to the sun when it is enveloped by the clouds, as he is described in these traditions, indicates several things.

1) The light of existence, knowledge and guidance reaches the creation through him (i.e., the Imam) as it is established in detailed traditions that they (i.e., the Ahlulbayt) are the ultimate reason for the existence of creation. Therefore had it not been for them, the light of existence would not have reached others. It is by their blessings, mediation and intercession that information and knowledge becomes manifest to the creation and afflictions and tribulations are averted from them. Had it not been for them, the creation would have deserved various punishments due to their evil deeds, but as God says:

‘But God would not send them punishment while you are in their midst…‛ (8:33)

We have experienced innumerable times when matters become difficult and complex, when avenues get blocked, when we find ourselves distant from God, the Most High and when the gates of abundant flow of blessings become obstructed, that then when we seek their intercession and solicit and beseech by means of their light, those difficult matters get solved in proportion to the spiritual connection achieved with them at that time. This is observed by the person whose inner eyes have been coloured by God with the light of faith.

2) When the sun is hidden behind the clouds, it continues to bring benefit to mankind. Nevertheless mankind continues to wait expectantly for it to reappear from behind the clouds so that they may benefit more from it. Similar is the state during the Imam’s concealment. The sincere ones from his partisans await his re-appearance all the time and in every epoch and do not give up hope in him.

5) A person attempting to look at the sun is unable to do so when it is completely devoid of cloud cover and such a person may even go blind. The same is the case with the Imam’s august personality. His manifestation may prove detrimental to their (i.e., the servants of God) sight and may prove to be the cause of their blindness from the Truth. Therefore, their faithful consideration of the Imam during his concealment may be compared to the viewing of the sun by a person when it is shrouded by the clouds and hence the person is safeguarded from harm.

6) The sun may come out from behind the clouds and some may be able to view it while others not. Similarly, it is possible for the Imam to manifest himself to some during his concealment and not to others.

7) They (i.e., the Ahlulbayt) are like the sun with respect to its general benefit and only such as are blind do not benefit from them as is mentioned in the Qur’an:

‚…those who were blind in this life will be blind in the Hereafter, and even further off the path!‛ (17:72)

8) Just as the rays of the sun enter houses depending on the number of windows and apertures available in it and in proportion to the existence or lack of obstacles thereof, so similar is the case with regards to the benefit obtained by creation from the light of their guidance. It is in proportion to the obstacles and impediments removed from their senses and consciences, which are the windows to the desires of the self, and in proportion to the removal from their hearts of thick and dense rings of prohibitive material till they reach the stage when they are beneath the sky, completely enveloped by the rays of the sun from all sides and without any clouds in between.

I have here, clarified and explicated for you eight reasons regarding these traditions which compare the Imam to the sun hidden behind the clouds. God had clarified to me eight more reasons due to His grace but words fail me to be able to convey them. May it be that God elucidates for us and you a thousand doors of knowledge from His knowledge, opening up a thousand more doors from every door.4