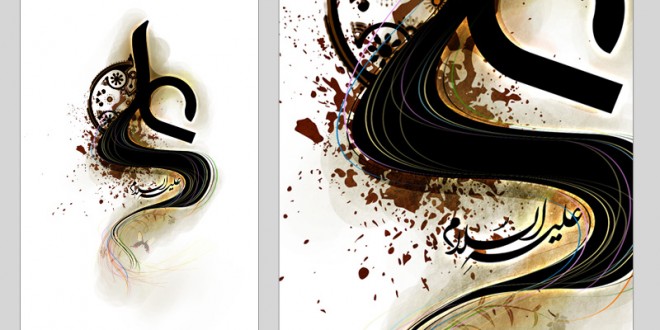 Those three mystical letters, mystify and hypnotize
Ain – Lam – Yaa or A – L – I, they never fail to surprise

Yes, undying he was, he is and will always remain
Even his death brought him life, the way he was slain

For a martyr always lives, from decease he is free
Struck whilst in prostration, what great status was he?
What status would the father of the master of martyrs be?

The inheritor of the Prophet, his sword and his shield
His trust, his lover, his protector on the battle field

The rightful inheritor, the truthful successor
The strongest weapon against any oppressor

Yes, undying he was, he is and will always remain
The scale of good and bad, even heaven is his domain

For his love is a condition, for even a glimpse of paradise
For the Prophets family is the condition to Allah, the Wise

And lest we forget whilst the city of knowledge is the Prophet
It is through Ali, the gate, from that light we can profit

In the harshness of darkness, in the depth of the cruelest night
His lovers faces will shine like the moon, beautified and bright

And at home, in the lonely city of Medina, only a few had remained
But the quality is that which mattered, their love was unchained

At the worst of battles they stood firm in front of sedition
For every breath they took, they breathed with Ali’s permission

His flag marched to Kerbela, they were the champions of Hussain
Ali was still alive, manifested in the hearts of the slain

Yes, undying he was, he is and will always remain
Even now, surrounded by storms, his servants fly his campaign

Even now, in this dark world, the candles are lit by the best of them
They fight evil where they find it, every oppressor they condemn

They fight from the hills in the south of the land of the cedar tree
Whilst from their mouth, and on their lips, their dhikr remains Ali

They fly the flag of Islam from the high mountains of Khurasaan
They die, struggle, and spread his blessed name, in the name of Islam

They protect the abode of his blessed daughter Zainab in Shaam
As darkness and evil surrounds them, they remain steady and calm

And the scent of the loneliness of Ali and Fatima rises from Bahrain
A people surrounded and suppressed, no one left to feel their pain

And yes, if they were criminals, than take us away too
This is one crime we will plead guilty for, any day too

His love prevails in the scattered tulips on the different battlefields
Khuramshahr, Shalamcheh and others, where they had become shields

They scatter across the quiet roads and green valleys of Parachinar
Like flowers adorning gardens, their fragrance sensed from afar

Yes, undying he was, he is and will always remain
Ghadeer to the return, this is our unbreakable chain

And what a day it will be when the love of Zahra returns
The inheritor of the Quran, the bible and the torah returns

The inheritor of the Zulfiqar, the lion of Allah returns
When the final seal of the box of Pandora returns

Mountains will crumble, dictators swallowed in sands
Waves will rise up and plummet and destroy all their lands

Ghadeer to the return, this is our unbreakable chain,
Yes, undying he was, he is and will always remain.