The late Ayatollah Sayyid Mahmoud Hashemi Shahroudi was born in 1948 in Najaf. His father, Ayatollah Sayyid Ali Hashemi Shahroudi, was one of the first disciples of Ayatollah Khoei and he was responsible for rewriting of graduate lessons (al-Dars al-Kharij) of Ayatollah Khoei. His mother was the daughter of the late Ayatollah Sayyid Ali Madadi Mousavi Qaini, one of the great scholars of Khorasan, who educated and taught the scholars of Islamic Seminary in the holy city of Mashhad and was the Imam of Congregational Prayer in the holy shrine of Imam Ridha (as) for many years.

He spent elementary and high school education at Alawi School in Najaf. One of his first teachers in religious studies was Hujjat al-Islam wal-Muslimin Sheikh Hadi Sistani. Ayatollah Shahroudi entered Muntada al-Nashr Islamic Seminary School and continued his religious studies and then at the age of 14, he was dressed in clerical clothing by Ayatollah Khoei.

After passing the elementary courses of Islamic studies at Hawza, he participated in graduate lessons of jurisprudence and principles (al-Dars al-Kharij Fi al-Fiqh wa Usul) and he was benefited by the lessons of prominent religious authorities of the Hawza of Najaf including Imam Khomeini, Ayatollah Khoei, and Ayatollah Shaheed Sayyid Muhammad Baqir al-Sadr.

Among the teachers of the late Ayatollah Shahroudi, his relationship with Shaheed Sadr was more than the others, and he can be considered among Shaheed Sadr’s close companions up until his martyrdom in 1980.

In a letter to one of his disciples, Shaheed Sadr wrote about the late Ayatollah Hashemi Shahroudi:

“Sayyid Hashemi has a fascinating and ingenious scholarly development.”

and also about the scientific relationship between himself and his disciple, Ayatollah Hashemi Shahroudi, he wrote:

“Sayyid Hashemi is as my existence.”

Because of the genius and talent of the late Ayatollah Hashemi Shahroudi, before he turns 30, he was given the permission of ijtihad, from Shaheed Sayyid Muhammad Baqir al-Sadr and the text of this permission is as follows:

In the Name of Allah, the Most Compassionate, the Most Merciful
All-praise be to the Lord of the Worlds, and blessings and greetings to the most noble of creation Muhammad and his pure progeny.
Our appreciated son, Hujjat al-Islam wal-Muslimin Sayyid Mahmoud Hashemi has spent some part of his life studying jurisprudence and the principles and sciences of Shari‘ah and with support of the Almighty Allah he has reached the level of Ijtihad. With the praise of Allah, he is today one of Mujtahids to whom the hope of Islam and Muslims is tied.
He is my representative in all affairs and his opinion is my opinion. All believers and my followers, as well as my representatives, are allowed to give him the religious finances that they want to bring to me. I ask the Almighty Allah to preserve him as a treasure for Islam.
Wasalaamu alaikum warahmatullah wabarakatuh,
Mohammad Baqir Al-Sadr

Ayatollah Hashemi Shahroudi was appointed by Shaheed Sadr to oversee the examinations of religious scholars and at the same time he was teaching al-Dars al-Kharij al-Fiqhi at the Al-Hindi Mosque of Najaf.

In June 1963, with the onset of the movement that led Islamic revolution under the leadership of Imam Khomeini, who was now stationed in Najaf, the Hawza there became one of the focal points of the struggle against the Pahlavi regime, due to the presence of the prominent religious authorities and leading scholars there. At this point, Ayatollah Hashemi Shahroudi also got acquainted with the thoughts of Imam Khomeini. His mentor Shaheed Sadr had specifically sent him to attend the classes of Imam Khomeini and assist him with his work. He would later become responsible for maintaining the communication lines between Shaheed Sadr and Imam Khomeini.

In fact, there were two people who played an important role in the relationship of Imam Khomeini and Shaheed Sadr. The first one was the late Sayyid Ahmad Khomeini, who had marital relations with the Sadr family, and the second was Ayatollah Hashemi Shahroudi who was in charge of informing Imam Khomeini with the views of Shaheed Sadr on important issues related to the Ummah, including the pressures of the Ba‘ath regime on the Hawza of Najaf, the exile, arrest and execution of scholars and the policies of Saddam Hussein against Shia religious gatherings.

Ayatollah Shahroudi’s struggles with the Ba’ath regime and the Pahlavi regime in 1973 caused that Saddam Hussein’s regime arrested him along with a group of other scholars, and interrogated him at Branch 5 of the Public Security Bureau and he was inflicted with various types of physical and mental torture.

With the victory of the Islamic Revolution, mass protests were held in Iraqi cities, particularly in Najaf Al-Ashraf, in support of the Islamic Revolution and the leadership of Imam Khomeini. The regime of Saddam Hussein started to search for rogue scholars to arrest them. At this point, Shaheed Sadr instructed Ayatollah Hashemi to leave Iraq. He moved to Kuwait and then to the newly founded Islamic Republic.

Following the failure to arrest him, Saddam Hussein’s regime arrested and executed three of his brothers, and even until now their bodies have not been found.

On arrival to Iran, Ayatollah Shahroudi was warmly received by Imam Khomeini and was given the responsibility for coordinating between the Hawza of Najaf and Imam Khomeini, in addition to being the general representative of Shaheed Sadr in Iran.

When the Imposed Iraq-Iran war started, and the pressure of Saddam Hussein increased on the Shia and Iraqi people, Imam Khomeini handed the responsibility of Iraqi affairs to Ayatollah Khamenei. In 1983, with the help of the revolutionary Iraqi scholars, in particular Ayatollah Sayyid Muhammad Baqir Al-Hakim and Ayatollah Hashemi Shahroudi, a newly founded organisation known as the Supreme Council for the Islamic Revolution in Iraq was setup.

Later, Ayatollah Shahroudi had this to say about it:

“Ayatollah Khamenei, whom God preserves, was entrusted by Imam Khomeini to follow the affairs of Iraq. I suppose that it was at the beginning of his presidency. The members of “Jama‘at al-‘Ulama” were all from Najaf, whereas the Karbalais had independently set up congregations for themselves, and most of them had connections to Shaykh Montazeri and Sayyid Mehdi Hashemi. Ayatollah Khamenei saw that this was not the right method, and suggested the establishment of a Majlis called the Supreme Council. The war had begun and necessity required the establishment of a proper council to gather all these groups together. In fact, he proposed the establishment of the Supreme Council, and he invited all of us, who were mostly in Qom. He contacted me directly. We had previously had a lot of greetings but we weren’t well acquainted. Someone had arranged a meeting for us and we went to his presence. He said that “I am responsible from the Imam’s side” and he had invited many scholars including from Karbala. He had also invited some of the scholars of Karbala under the title “al-‘Amal al-Islami”. In this meeting Ayatollah Khamenei gathered everyone in the Supreme Council and there was a great deal of discussion at the first meeting. Some of them were in agreement and some of them were not. By the end of this process, he set up this organisation and set up a constitution, asking us to discuss it and give it to him. We did it. Of course, Sayyid Al-Hakim was the centrepiece. Two or three people were from Karbala and the rest of them were from Najaf.”

From Scholarly Contributions to Being Appointed the Chief Justice of Iran

During his seven decades of life, Ayatollah Hashemi Shahroudi had various scholarly and political activities. Among his scholarly activities, we can mention his role in the Community of the Lecturers of the Hawza of Qom, the High Council for Policymaking of Islamic Seminaries, the Ahlulbayt World Assembly, the World Assembly for Proximity of Islamic Schools of Thought and the Presidency of the Institute of Encyclopaedia of Islamic Jurisprudence.

He was one of the scholars who had discussions with Ayatollah Khamenei at the beginning of his leadership to examine his jurisprudential and scientific ability. Ayatollah Mo’men said about this in an interview with Tasnim News Agency:

“In the early days of the leadership of Ayatollah Khamenei, we went to him and said: In order to inform other knowledgeable scholars about your jurisprudential and scientific knowledge, it is a good idea for us to have some scholarly sessions. I recall that he said, “For the time being as I have been appointed as a leader recently, my meetings with different groups of people is an obstacle for this.” We said, “We do not mean necessarily now. Let us have the sessions a while later.” He accepted and these sessions were later held with the presence of the Jurists of the Guardian Council and some of the greatly qualified scholars who had a wide acceptance in the Hawza. I remember that Agha Karimi, who was one of the great scholars of Qom Hawza, Sayyid Hashemi Shahroudi, who was not in charge as an official at the time, Agha Khatam Yazdi and some other great scholars such as Agha Mahdavi Kani were invited to these sessions.”

On 29th December 1992, Ayatollah Khamenei appointed a group of scholars including the late Ayatollah Hashemi Shahroudi to study the new jurisprudential issues and prepare a scholarly and scientific jurisprudential response regarding the current state of the world and new scientific advances for the Muslim individuals and the Muslim community.

In 1999, Ayatollah Khamenei appointed to him the responsibility of heading the Judiciary, as Chief of Justice, he would oversee the reform process of Iran’s Justice System and would hold this position for two consecutive terms totalling 10 years. During this time, he was able to make some major changes, including the revision and the drafting of Islamic Penal Codes, the application of policies against imprisonment, trying to eliminate some punishments, an increase in lawyers, and the expansion of ties between Judiciary Powers of the Islamic countries.

In June 25, 2008, in a meeting of officials from the Judiciary, Ayatollah Khamenei said:

“Today, the Judiciary Power, is managed under the presidency of Sayyid Shahroudi, who is a knowledgeable Mujtahid and who is a master of Islamic foundations and discussions. The existence of such great personalities and such prominent figures within the Judiciary Power is a great opportunity.”

After leaving his role in the Judiciary, Ayatollah Hashemi held many other roles making him an indispensable official of the Islamic system.

Among his responsibilities, he was a senior jurist member of the Guardian Council, a member of the Assembly of Experts of the Leadership, and the Chairman of the Expediency Council.

He dedicated much of his later years to teaching in the Hawza Ilmiyya of Qom, in which he was one of its greatest treasures. His lessons in Jurisprudence and its Principles, were widely acclaimed as one of the best in the Hawza and his thoughts were widely published. 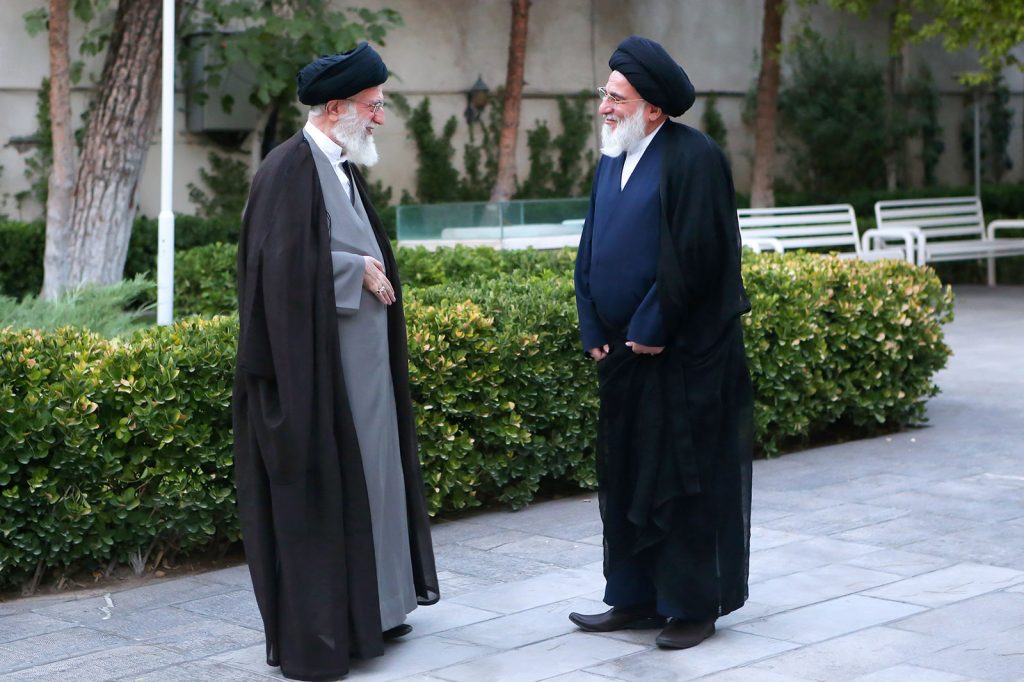 Over the years of service in the Islamic Republic, Ayatollah Hashemi Shahroudi was a firm supporter and close friend of the Supreme Leader Ayatollah Khamenei; and many had predicted that in the unfortunate circumstance of the demise of the Leader, Ayatollah Shahroudi may have taken the helm.