AIM statement on Woolwich attack: What we feared has happened 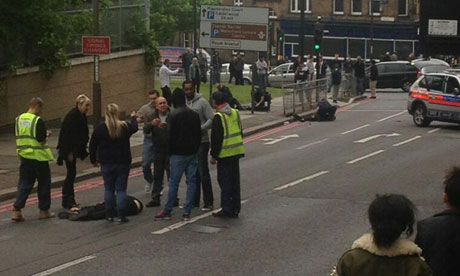 The AhlulBayt Islamic Mission (AIM) sends its condolences to the family of Drummer Lee Rigby; the victim who was horrifically murdered yesterday in Woolwich, London.
Although the details are still unclear, yesterday’s attack bears the classic hallmarks of sickening crimes committed by individuals and groups that adhere to an extremist and militant form of Salafist ideology. Recently, we saw horrific scenes of a Salafist ‘rebel’ mutilate the body of a Syrian soldier and chew into his organs—all the while posing before the camera to film his crimes. We also witnessed sectarian violence in London earlier this month when Salafis marched through Edgware Road and assaulted Muslims of another denomination.
In this respect, the Woolwich attack has confirmed our deepest fears that the extremism that has plagued some parts of the Muslim world can come to haunt the streets of London. This shocking and heartless murder emphasises once more the need to tackle the unresolved issues that are at the heart of the problem of extremism. Indeed the rise of extremist Salafist and Far-Right groups in Britain both present serious challenges to the security and social fabric of this nation.
In light of these difficult challenges, it is of utmost importance that we stress the importance of unity, solidarity and a strong sense of community spirit. We urge the media to act responsibly in their coverage and analysis—in this regard; we remind the media that such extremists specifically thrive on sensationalised coverage, since this provides them with psychological capital for their cataclysmic worldview.
We commend the police for how they have handled developments thus far. We are confident that they shall continue to restore the calm, and prevent provocative actions by rogue elements within society who may wish to exploit recent events to further their agendas.
Finally, we call on political, religious and community leaders to play their critical roles during this important juncture; and to take advantage of the overwhelming sentiments of shock and sympathy felt across Britain today to address some of the root-causes of these problems.
23rd May 2013
AhlulBayt Islamic Mission (AIM)